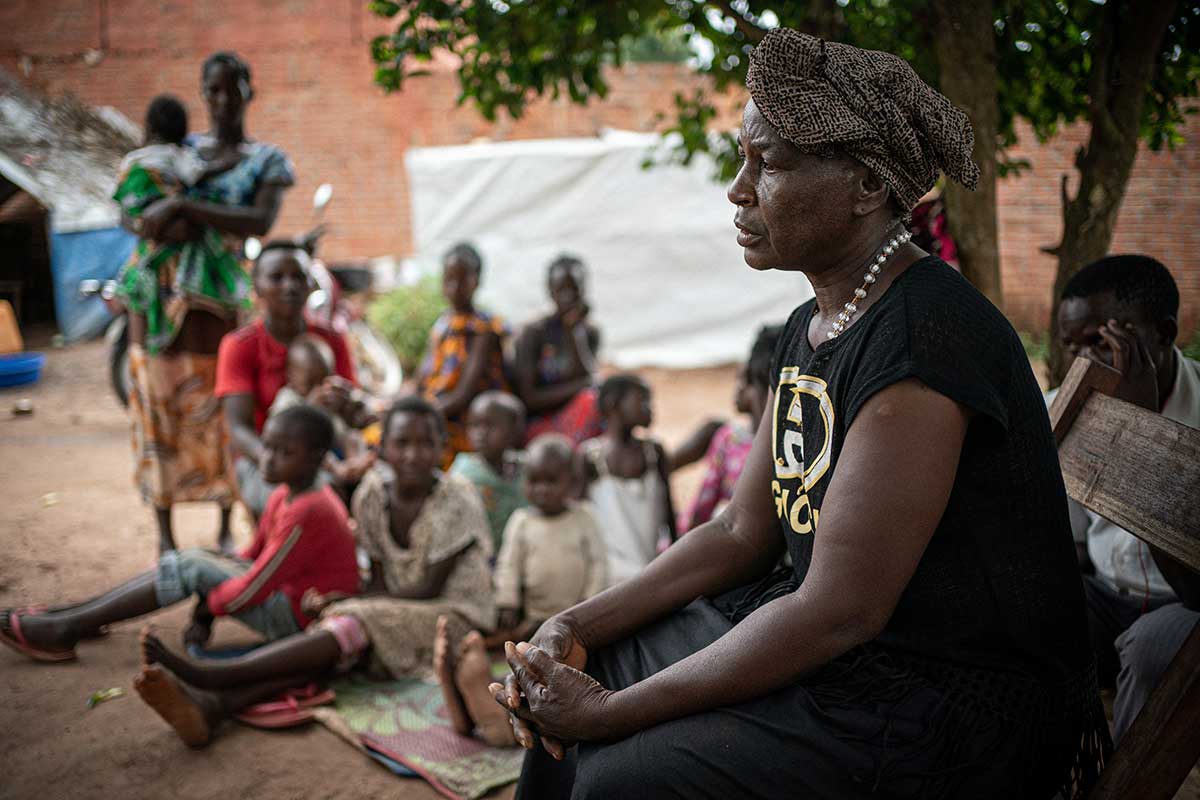 Angelina Dominic Zaaza, who was displaced by interethnic violence Tombura, South Sudan, is pictured in Yambio, South Sudan, on Sept. 11, 2021. Along with several family members, she took refuge in the home of relatives and received material assistance from the local Catholic diocese. (CNS photo/Sean Hawkey)

By Paul Jeffrey – Pope Francis may have kissed the feet of South Sudan’s warring political leaders in a dramatic 2019 appeal for peace, but armed conflict continues to cause death and displacement in the world’s newest country, pushing Catholic leaders here to plead for the conflict’s victims.

“I can’t sleep well these days, I’m so deeply worried. I just keep on praying and asking for help,” said Bishop Edward Hiiboro Kussala of Tombura-Yambio, who recently called on foreign donors to provide emergency food and supplies to people displaced by fighting in the state of Western Equatoria.

“With what we’ve received, we’re making a miracle with it. We bought some food. It’s like a drop in the ocean, but it makes a difference,” he told Catholic News Service.

The conflict centres around the town of Tombura, a largely Zande community, though members of the Balanda tribe have lived in the area for years, at times intermarrying with the Zande. Yet, encouraged by politicians at odds with the country’s ruling party, including two state governors, some Balanda are trying to force the Zande out of their traditional homeland.

“The situation in Tombura is devastating. A town of 200,000 people is deserted. And it’s the rainy season. Unlike in other parts of the country, people here have always fed themselves without needing humanitarian assistance. But now thousands have had to run away from their farms. And the government isn’t doing anything to stop what’s going on,” Bishop Kussala said.

“People are slaughtering each other. The victims are civilians, many women and children. They run to the church, crying for assistance. So we are praying, and with other religious leaders we’re talking to the government and reaching out to those perpetuating this violence. But when people have weapons they hardly listen to those who say stop it. We have one ethnic community targeting another ethnic community, and at the end of the road it will become genocide.”

Angelina Dominic Zaaza was at home in Tombura late Aug. 22 when she heard gunfire and, with her children, ran into the nearby forest, where they spent the night as the gunfire continued.

“The next morning, we went back and found our house burned, all our clothes and belongings destroyed. We only had the clothes on our backs,” she told Catholic News Service in Yambio, where she’s living with her sister Margaret, who paid two motorcycle drivers to make four multi-hour round trips to ferry Zaaza and 26 other relatives from Tombura to Yambio.

“We also lost my father. As we were running for the forest, some armed men took him away. We haven’t heard from him since,” Zaaza said.

Zaaza and her family are crowded into two huts belonging to her sister. The Catholic diocese provided the family with mats, blankets and cooking pots.

Zaaza says she has no interest in returning.

“If my father is dead and our house is burned, what’s there to return to? We’re better off here, crowded as we are, than returning to Tombura,” she said.

A member of the Zande tribe, Zaaza said she did not know the identity of the attackers.

Yet Father Mark Kumbonyaki, the priest of St Mary Help of Christians Parish in Tombura, says reluctance to identify the attackers is not surprising, given how the region is controlled by the Sudan People’s Liberation Movement In Opposition, commonly known as the IO, which since 2018 has participated in a rough power-sharing arrangement with the ruling party of President Salva Kiir.

“People are afraid, because the area is now controlled by the IO. If you tell the truth, the IO security will come and arrest you at night and kill you,” Father Kumbonyaki said.

The priest said the Balanda have been preparing for years for the current violence, ferrying young Balanda men with guns and ammunition from Wau, as well as making an alliance with ex-Seleka militants from the Central African Republic.

“The Balanda want the land, and they plan to take it from the Zande. They made alliances with other groups to come and help them, and when they take over, they will give some of the land to those other groups,” Father Kumbonyaki said.

Interviewed by phone in Nairobi, where he’s receiving medical treatment, Father Kumbonyaki said the church has been trying to work for peace in the tense environment.

“The bishop went to talk with them and pray for peace, but the church can’t stop them from carrying out their plan. I’ve tried to organise a peace conference between the Zande and the Balanda, but the Balanda told me that they won’t listen. They are soldiers. They won’t listen to the church,” he said.

The Diocese of Tombura-Yambio borders dense forests in the Central African Republic, Chad and Congo, and militia groups – including the Lord’s Resistance Army of Joseph Kony – have long found refuge in one country while wreaking havoc in another. South Sudan’s fractious opposition movement is no exception and has formed alliances throughout the area, including with armed groups in the Darfur region of Sudan.

Bishop Kussala worries the violence will grow worse – and spread.

“South Sudan is a mess and can’t control its border. The thick forest functions as a safe haven for these rebels, including some who are Islamic jihadis. Kony’s people are out there as well. They are supported by huge companies; we don’t know who. Last week, over a thousand armed guys on the back of horses and donkeys travelled through our forest. That’s not a good sign. The international community needs to pay attention. If these people find a stronghold here, it will become a breeding ground for the rest of sub-Saharan Africa. To dig them out of the forest will not be easy. These people should be stopped, the earlier the better.”

Bishop Kussala said faster implementation of a 2018 peace agreement would help bring stability to the region.

“But the slowness, the lack of energy the government is putting into it is only giving fertile ground to these kinds of groups. And there are so many commanders in chief, which just creates chaos and more suffering for civilians. And those of us trying to bring life, trying to transform the nation, we are extremely sad.”