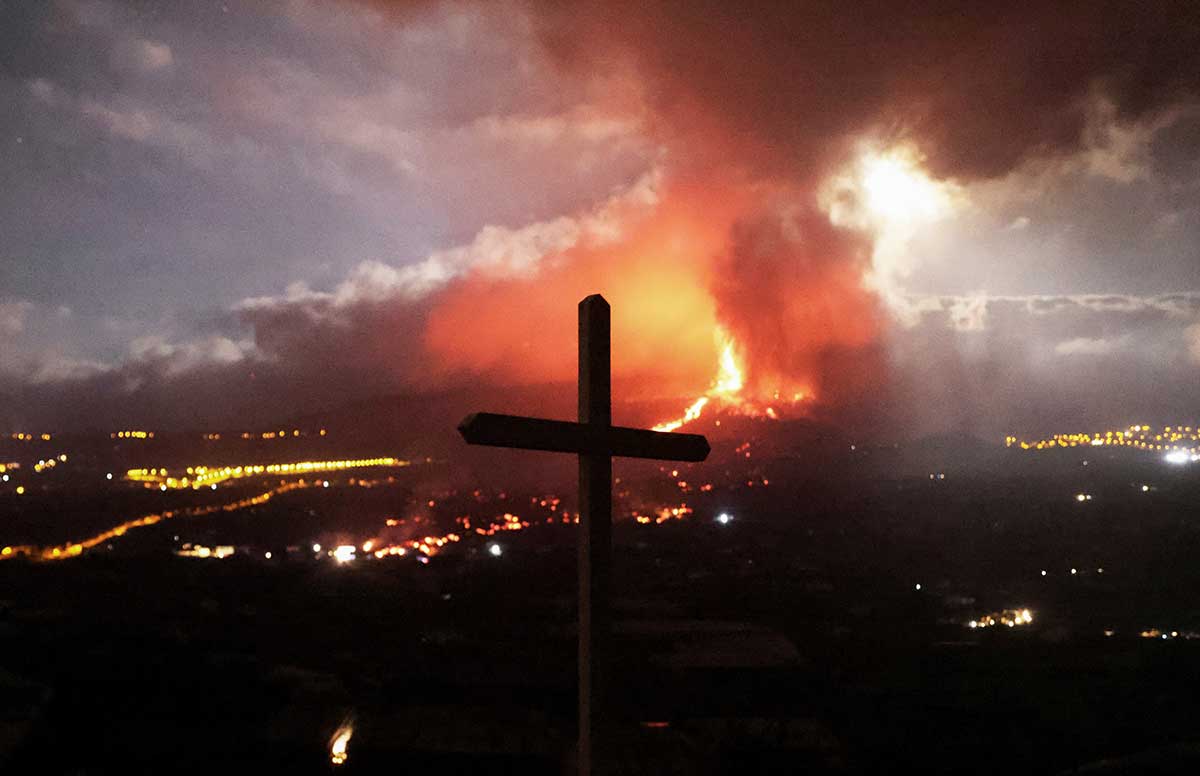 A cross is pictured as lava and smoke rise following the eruption of a volcano on Spain’s La Palma Island Sept. 21, 2021. As of Sept. 22, the eruption has destroyed nearly 200 homes and forced the evacuation of at least 6,000 people. (CNS photo/Nacho Doce, Reuters)

Spanish church leaders are urging prayers and donations for residents of the Canary Islands, after earthquakes and a volcanic eruption devastated parts of the Atlantic island chain.

“We welcome the public administration’s speed in ensuring the safety of all those affected and caring for those with greatest vulnerability,” said a Sept. 22 statement from the Catholic aid agency Caritas in the Tenerife Diocese. “We are adding our own resources to agencies and institutions across the territory, sharing the commitment and solidarity which move us as a church.”

The message was published as emergency workers battled to save properties and businesses on La Palma, one of the seven main Canary Islands, after a volcanic eruption in the Cumbre Vieja mountain range.

Caritas said a special fund had been set up to help the evacuated and homeless and to provide family support and employment for those facing poverty and dispossession.

Meanwhile, the Tenerife Diocese, covering the islands of La Palma, Tenerife, La Gomera and El Hierro, arranged special Masses in its 312 parishes, and said Mary and St. Michael the Archangel had traditionally protected islanders “during times of epidemic and eruption.”

“We thank God for the technical human means which enabled us to anticipate this eruption and save our population,” the Caritas statement said. “Imploring God for an end to this volcanic crisis, we will also request comfort and hope for those who will have lost their homes and livelihoods.”

Two days earlier, Bishop Bernardo Álvarez Afonso of Tenerife expressed “closeness and solidarity” with La Palma residents, and urged prayers especially “for the sick, elderly and those with mobility problems.”

Spanish TV reported that at least 22,000 minor tremors had been detected on La Palma before the Sept. 19 eruption, which also triggered four substantial earthquakes.

It said more than 6,000 people had been evacuated by Sept. 22. Maritime officials established an exclusion zone of two nautical miles from La Palma’s densely populated west coast, amid fears the molten rock could release toxic gases when it reached the ocean.

Father Domingo Guerra Pérez, 79, said the lava flow, which seismologists estimated could continue for three months, had been “much more worrying and overwhelming” than previous Cumbre Vieja eruptions.

Father Antonio Hernández Felipe told Spain’s Alfa y Omega Catholic weekly that “bewilderment at the beauty of this manifestation of nature” had quickly turned to “tears and helplessness,” adding that he had hurriedly stripped precious objects from his church at Los Llanos de Aridane as the lava river approached.

“We took Virgin statues, paintings, benches, chalices, ornaments and altar cloths – everything we could rescue,” the priest told the newspaper.

“These are humble, hardworking people – mostly farmers who’ve built homes and livelihoods here. We must now wait to see if the worst predictions come true, or whether we can still save our neighbourhoods.”