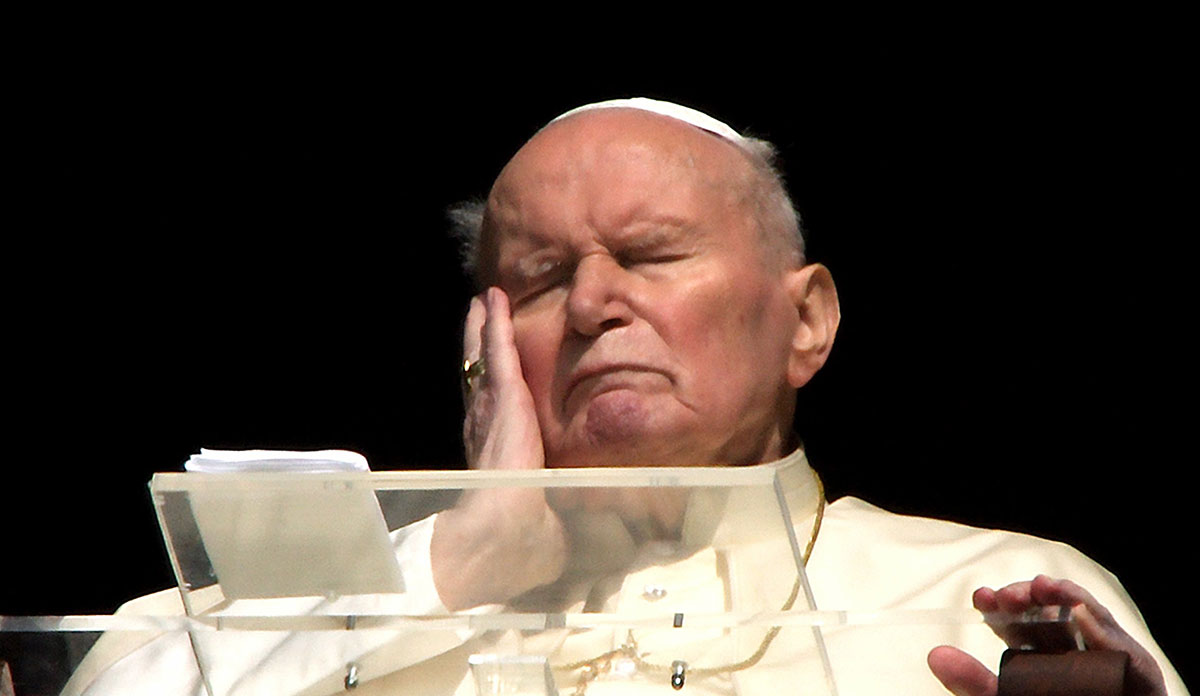 Pope John Paul II touches his face as tries to speak from the window of his private apartment at the Vatican on March 30, 2005, three days before his death. Catholic bishops of England and Wales are planning a novena to St John Paul in the nine days before the second reading of an assisted suicide bill in the House of Lords, because the legislation will be considered Oct. 22, the saint’s feast day. (CNS photo/Max Rossi, Reuters)

By Simon Caldwell –  Catholic bishops of England and Wales are planning a novena to St. John Paul in the nine days before the second reading of an assisted suicide bill in the House of Lords, because the legislation will be considered on October 22, the saint’s feast day.

Auxiliary Bishop John Sherrington of Westminster, lead bishop for life issues, said in a  statement that the timing was “providential.”

“The novena, asking the intercession of St John Paul II, who spoke courageously about the infinite worth of each human person and witnessed to the cross in his final illness, calls upon Catholics and all who share our view that assisted suicide is wrong, to pray with perseverance that this bill will be defeated,” Bishop Sherrington said.

The bishops have written the laity to encourage them to actively oppose the legislation.

Similarly, bishops of Scotland said Catholics must make politicians aware of the “serious dangers of assisted suicide” ahead of a debate over new Scottish legislation, said the church’s parliamentary liaison officer.

Anthony Horan, director of the Catholic Parliamentary Office, said Catholics must engage with elected representatives to warn them of “the deadly and irreparable consequences of its legalisation.”

His statement came as the Assisted Dying Bill of Liam McArthur, a Liberal Democrat member of the Scottish Parliament, began a three-month public consultation before it is considered by the Scottish Assembly next year.

“We are once again being confronted with the frightening proposal that doctors be legally permitted to help patients kill themselves by providing them with a lethal cocktail of drugs,” Horan said.

Such a law, he said, would put “immeasurable pressure on vulnerable people, including those with disabilities, to end their lives prematurely for fear of being a financial, emotional or care burden on others.”

“Incremental extensions and the removal of protections and safeguards are inevitable,” he added.

In a Sept. 22 statement announcing the consultation, McArthur said he believed “the time is right for Scotland to look again at providing our dying people with more choice at the end of life.”

The bill proposes assisted suicide for terminally ill adults with mental capacity and with the authorisation of two doctors following a period of reflection.