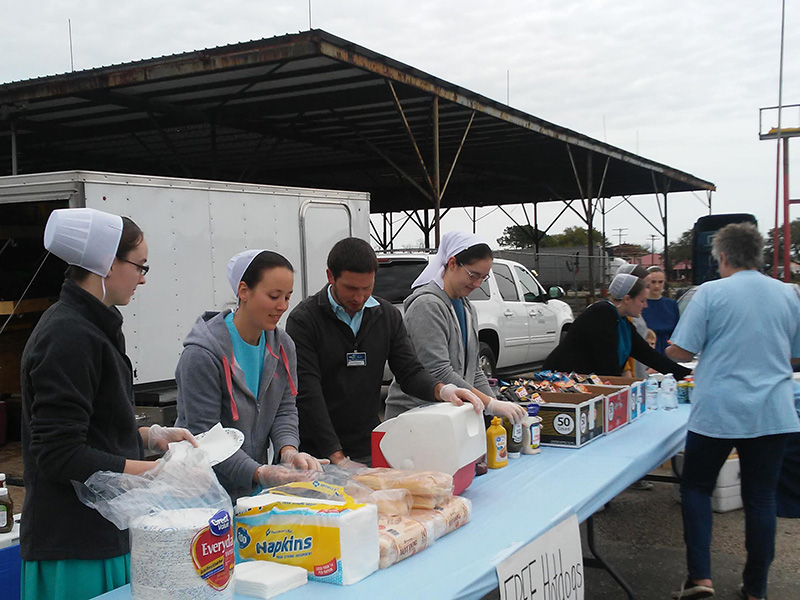 A group of 17 missionaries and family members were abducted in Haiti on Saturday, the New York Times first reported. The missionaries were part of Christian Aid Ministries, based in Ohio, and were kidnapped while visiting an orphanage.

In an update posted to its website on Sunday afternoon, Christian Aid Ministries asked for prayers for a “resolution.” It said the group included five men, seven women, and five children; nearly all of those abducted were U.S. citizens, with one Canadian citizen in the group.

“As an organisation, we commit this situation to God and trust Him to see us through. May the Lord Jesus be magnified and many more people come to know His love and salvation,” the group stated.

A person familiar with the situation said one of those abducted sent a message via WhatsApp, the Washington Post reported. “Please pray for us!! We are being held hostage, they kidnapped our driver. Pray pray pray. We don’t know where they are taking us,” the message stated.

A Haitian police official alleged that the infamous “400 Mawozo” gang was responsible for the kidnapping, the AP reported on Sunday. That same criminal gang was behind the kidnapping of Catholic priests and religious in April.

The missionaries were based in the town of Titanyen, and were returning from building an orphanage in Fond Parisien, according to the Times report.

The website of Christian Aid Ministries states that it serves as a “channel for Amish, Mennonite, and other conservative Anabaptist groups and individuals” to provide aid to those in need around the world. It supports aid and anti-poverty efforts in countries such as Haiti and Kazakhstan, but also promotes billboard evangelism in the United States and advertises assistance for any conscientious objectors in the event of a U.S military draft.

Haiti has been rocked by natural disasters, civil unrest, and frequent gang violence and kidnappings in recent months. The country’s president Jovenel Moïse was assassinated at his home in July, and a 7.2-magnitude earthquake hit the country in August.

A top Holy See diplomat on Friday warned of “unbearable” security problems in the country, in a statement at the United Nations Security Council Arria Formula Meeting on Haiti.

The presidential assassination “proves that no one is invulnerable,” said Archbishop Gabriele Caccia, Permanent Observer of the Holy See to the United Nations. “Lack of security has become unbearable, with seemingly no hope in sight.”

He noted “widespread civil unrest” in Haiti, where “kidnappings have become commonplace, and gang violence is so pervasive that humanitarian actors are impeded from carrying out their vital work.”

“Frequently these have included missionaries and personnel of faith-based organisations,” he said.

In April, 10 Catholic priests and religious were abducted in the town of Croix-des-Bouquets. The criminal gang which calls itself “400 Mazowo” demanded a $1 million ransom in the case. Three of those abducted were released the same day, while the remaining seven were released after several weeks; it was unclear if the ransom had been paid.

At the time the Archdiocese of Port-au-Prince warned in a statement that gang violence in the country had reached “unprecedented” levels.