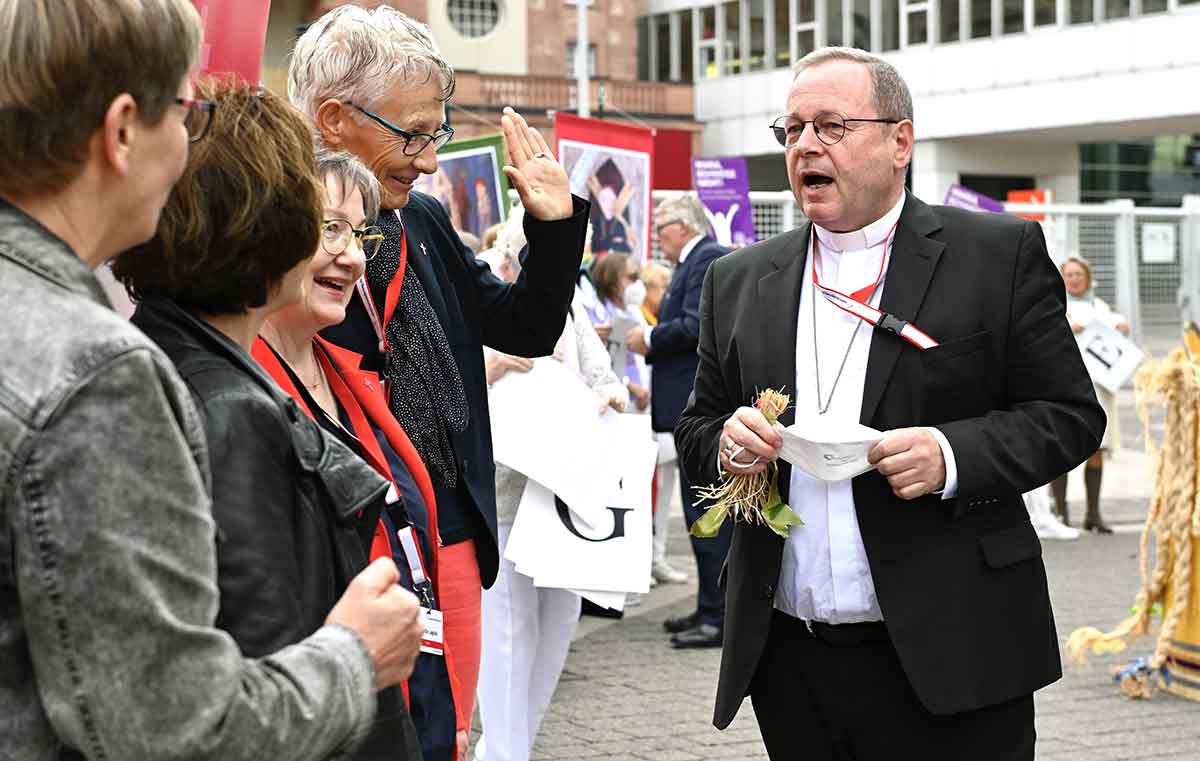 Bishop Georg Bätzing, president of the German bishops’ conference, talks with protesters from Maria 2.0 and We Are Church outside the second Synodal Assembly in Frankfurt, Germany, on Sept. 30, 2021. (CNS photo/Julia Steinbrecht, KNA)

By Anli Serfontein – Against the background of lay Catholics’ anger about a Vatican decision not to censure Cologne clergy for mishandling abuse cases, German Catholics – bishops, clergy and laity – gathered in Frankfurt for the start of the three-day Synodal Path Assembly.

But before discussions began on the agenda, the leadership decided to allow an hour to clear the air after the Vatican decided to reinstate bishops accused of mishandling abuse.

“We can’t just continue with our agenda – we need a discussion,” said Limburg Bishop Georg Bätzing, president of the German bishops’ conference and co-president of the assembly. Without mentioning names, he said he understood everyone who was “desperate and stunned” by the Sept. 24 Vatican announcements.

After an investigation into the handling of abuse cases in the Archdiocese of Cologne, the Vatican found that Cardinal Rainer Maria Woelki did nothing illegal, but he did contribute to a “crisis of trust” in his archdiocese. Pope Francis granted him a sabbatical until March 1.

The Vatican also did not accept the resignation of Hamburg Archbishop Stefan Hesse, former head of clergy personnel in Cologne, and Cologne Auxiliary Bishops Ansgar Puff and Dominik Schwaderlapp.

On Sept. 29, in a statement released by the Central Committee of German Catholics, 57 of the 230 Synodal Assembly delegates criticised the Vatican and charged that trust had been undermined. They said the decision to leave Cardinal Woelki in office could only be met with “incomprehension.”

“As members of the Synodal Path Assembly, we are willing to continue on the Synodal Path. We expect our bishops to join us in this journey as a sign and instrument for a genuine rediscovery of the good news of God in our time. And we expect the bishop of Rome, in communion with all the bishops, to examine the impulses of our Synodal Path in an unbiased way. Otherwise, any talk about the synodal constitution of our church would become a mere farce,” the letter said.

Cardinal Woelki was present for the assembly, and many delegates used the special discussion to voice their anger.

The discussion opened with remarks by Johannes Norpoth, spokesman for the church’s Victims Advisory Council. He told delegates that the time for “begging and pleading” by those affected is over. “We expect the Synodal Assembly this weekend to be courageous,” he said.

Ulrike Göken Huismann of the 400,000-member Catholic Women Germany spoke of the anger and the disbelief that recent developments in the Catholic Church evoked among many Catholic women.

Another delegate, Gudrun Lux, said she had come to the assembly with a lot of anger and little hope: “What has this church come to, if it is the same here as it is in the world outside: The big guys can do what they want, the little ones are hanged, the big guys are let off the hook.” She said she was hoping to leave the assembly with a changed heart.

Bishop Franz-Josef Overbeck of Essen spoke of taking responsibility for personal guilt and responsibility for guilt emanating from the system and stressed, “The days we will spend here together, we have to take care of one thing above all: credibility.”

But Berlin Archbishop Heiner Koch chimed in that he was worried that those supporting the Vatican could be in a minority and might feel they could not express themselves in the assembly.

The assembly has as equal partners the German bishops’ conference and the Central Committee of German Catholics, and the executive committee is chaired by Bishop Bätzing and Thomas Sternberg, head of the central committee. The seating order in the hall was not in terms of rank or status, but alphabetically, so bishops, cardinals and delegates from youth or lay organisations were sitting next to each other.

“We are here to help our church to get rid of toxic structures,” Sternberg said in his opening remarks.

Responding to some Vatican criticism of the Synodal Path process, Bishop Bätzing said, “Holy Father, we are not processing texts, but we are writing up dreams to expand on.”

Afterwards, Bishop Bätzing said the Central Committee of the Synodal Path had been unsure if an open discussion would be wise, but that it was a very fruitful discussion.

Sternberg agreed and said it was “important that anger was aired and that responsibility is claimed.”

The bishops’ conference and the Central Committee of German Catholics launched the Synodal Path as an attempt to revitalise the church and restore trust following a September 2018 church-commissioned report that detailed thousands of cases of sexual abuse by Catholic clergy over six decades.

The assembly delegates, including clergy and representatives of the church’s grassroots organisations, will deliberate on reforms for the Catholic Church through Oct. 2. Using documents developed in smaller groups, they will address issues such as power and separation of powers in the church; priestly existence today; women in ministries and offices in the church; and sexuality and morality.

Earlier, at a news conference, Bishop Franz-Joseph Bode of the executive committee of the Synodal Path told journalists: “If tradition wants to remain alive, it must face the signs of the times in the light of the Gospel.”