Pope Francis: Greatness is not found in self-sufficiency but in trust in the Lord 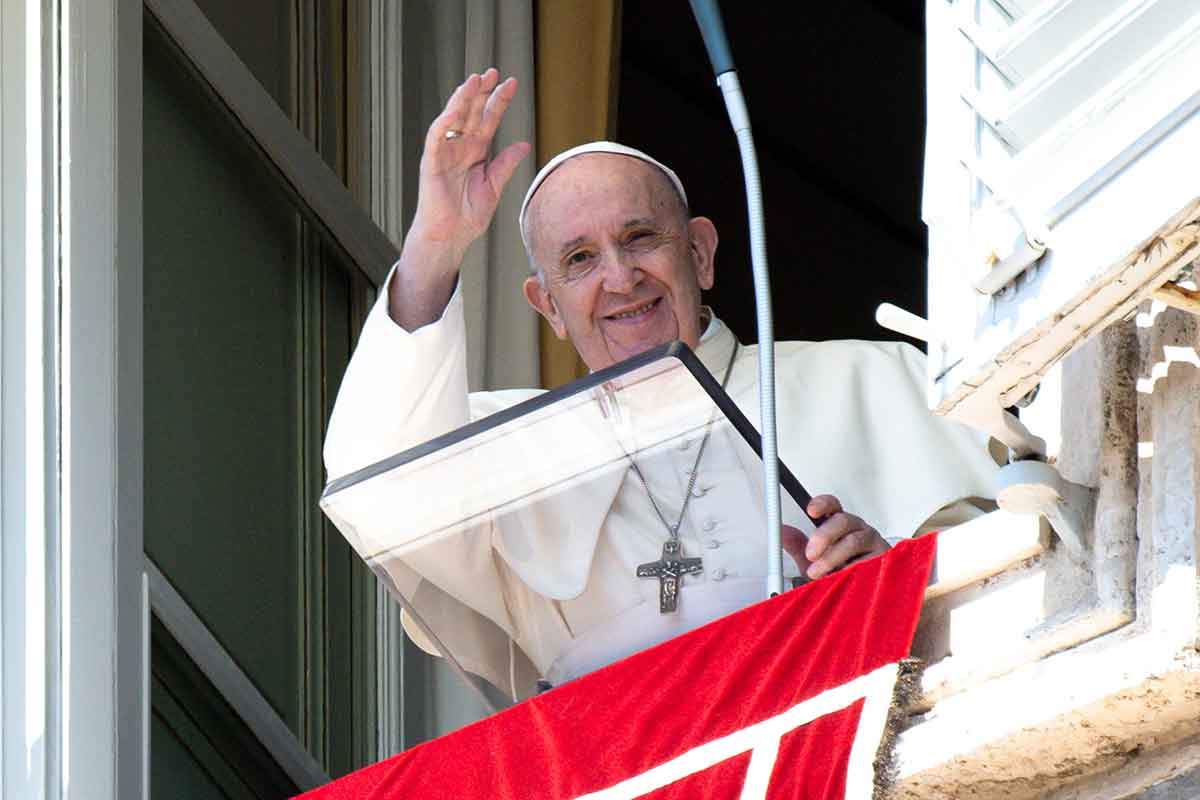 Pope Francis greets the crowd as he leads the Angelus from the window of his studio overlooking St Peter’s Square.  (CNS photo/Vatican Media)

Pope Francis at his Angelus today: Recognising one’s own frailty allows for the possibility to discover that true strength comes from placing all one’s hope in the Lord.

“This is how we become great: not in the illusory pretence of our self-sufficiency – this does not make anyone great – but in the strength of placing all our hope in the Father, just as the little ones do,” Pope Francis said.

“Today let us ask the Virgin Mary for a great grace, that of smallness: to be children who trust the Father, certain that He does not fail to take care of us.”

Speaking to pilgrims gathered in St. Peter’s Square from the window of the Vatican’s Apostolic Palace, the pope said that Christian disciples must not only serve “the little ones,” but must also acknowledge their own smallness.

“Often, however, we forget about this. In prosperity, in wellbeing, we have the illusion of being self-sufficient, of being enough for ourselves, of not needing God. Brothers and sisters, this is a deception because each one of us is in need, a little one. We have to look for our own littleness and recognize it.”

Pope Francis said that recognising one’s own frailty allows for the possibility for growth in faith in the face of life’s challenges.

“If we think about it, we grow not so much on the basis of our successes and things we have, but above all in moments of struggle and fragility. There, in need, we mature; there we open our hearts to God, to others, to the meaning of life,” he said.

“When we feel small in the face of a problem, small in front of a cross, an illness, when we experience fatigue and loneliness, let us not be discouraged. The mask of superficiality is falling away and our radical frailty is re-emerging: it is our common base, our treasure, because with God frailty is not an obstacle but an opportunity.”

“A beautiful prayer would be this: ‘Lord, look at my frailties …’ and list them before Him. This is a good attitude before God. “

Pope Francis encouraged people to seek Jesus in caring for the poor and the sick.

“Those who seek God find Him here, in the little ones, in those in need: in need not only of material goods, but of care and comfort, such as the sick, the humiliated, the prisoners, the immigrants, the incarcerated,” he said.

“He is there. … Any affront to a little one, a poor person, a defenceless person, is done to Him.”

After praying the Angelus prayer with the crowd, the pope said that he was saddened by the recent violence that broke out in a prison in Guayaquil, Ecuador, where more than 100 people were killed by inmates belonging to revival gangs.

“May God help us heal the wounds of crime that enslaves the poorest, and help those who work every day to make prison life more humane,” he said.

Pope Francis also offered prayers for the people of Myanmar, who continue to suffer eight months after the military coup toppled the civilian government.

“I wish once again to implore God for the gift of peace for the beloved land of Myanmar: so that the hands of those who live there no longer have to dry tears of pain and death, but may cling to overcome difficulties and work together for the advent of peace,” the pope said.

The pope encouraged Catholics to renew their commitment to pray the rosary during the month of October and pointed to the example of Blessed Maria Antonia Samà and Blessed Gaetana Tolomeo, two recently beatified laywomen who had great devotion to praying the rosary from their sick beds.

“Sustained by divine grace, they embraced the cross of their illness, transforming their pain into praise to the Lord,” Pope Francis said.

“Their sickbeds became a spiritual reference point and a place of prayer and Christian growth for many people who found comfort and hope there. Let us applaud the new Blesseds!”

Before the Angelus prayer on Sunday, the pope greeted the participants in a social sciences conference taking place in Vatican City.

“In these times of opulence, when it should be possible to put an end to poverty, the powerful with a one-track mind say nothing about the poor, the elderly, immigrants, the unborn and the seriously ill,” he said.

“Invisible to the majority, they are treated as disposable. And when they are made visible, they are often presented as an unworthy burden on the public budget. It is a crime against humanity.”