Bishops Living in Amazon ask COP26 for Actions to Save Planet 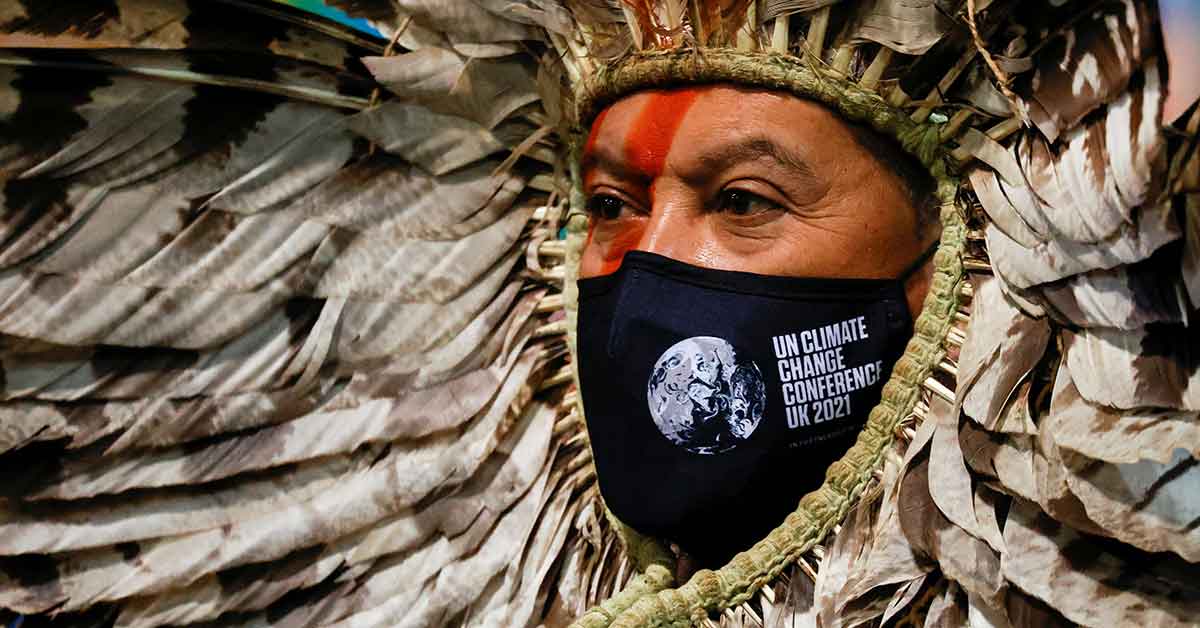 Indigenous Amazon delegate Romancil Gentil Kreta, wearing a protective mask with a logo of the U.N. Climate Change Conference, looks on during the conference in Glasgow, Scotland, Nov. 3, 2021. Bishops from the Amazon region are asking leaders from around the world gathering for the conference for commitment to protect vulnerable communities and the Amazon ecosystem. (CNS photo/Phil Noble, Reuters)

By Lise Alves – Bishops from the Amazon region are asking leaders from around the world gathering for the UN Climate Change Conference to commit to protecting vulnerable communities and the Amazon ecosystem.

The recorded message, produced by the Pan-Amazonian Church Network, or REPAM, was released during the U.N. conference in Glasgow, Scotland. International representatives at the conference are discussing roads to a sustainable ecology, reduction of greenhouse gases and solutions to mitigate the negative effects of climate change on the world’s populations.

“I urge COP26 participants to listen to the cries of the peoples, waters and forests of the Amazon and to pressure the Brazilian government to effectively commit itself to the defence of the original peoples, forests and waters of the Amazon,” retired Bishop Erwin Krautler, president of REPAM-Brazil, said in the video, released on November 5.

With the video, the religious, who all live and work in the Amazon region, hope to mobilise society and pressure the Brazilian government and others at COP26 to adopt concrete and urgent measures to protect the rainforest.

“Along with Pope Francis, we ask for urgent and courageous commitments from COP26 to combat climate change and protect our beloved Amazon,” said Bishop Vasino.

“We are in the Amazon (region), we are with Pope Francis, and we are following the COP26 conference,” agreed Archbishop Roque Paloschi of Porto Velho.

Pope Francis told Alok Sharma, COP26 president, that the conference “can and should actively contribute to the conscious construction of a future where everyday behaviour and economic-financial investments can really safeguard the conditions of a dignified life for humanity today and tomorrow on a healthy planet.”

“We are all aware of the important task of showing the entire international community if there really is a political will to allocate, honestly, responsibly and courageously, more human, financial and technological resources to mitigate the negative effects of climate change,” the pope said.

In early November, the Pan-Amazonian Church Network and the Ecclesial Conference of the Amazon delivered a letter to COP26 participants in which leaders stated the need to “start acting and in an integral way, to respond to all this infernal reality, ratifying the Paris Agreement and all that it implies. We are all part of the problem, but also part of the solution.”

“We want to express to you our feeling of bewilderment and, at the same time, of impotence when contemplating and experiencing the chaos that our planet is experiencing, among other things, because of climate change and its catastrophic consequences for humanity and for the common home, as Pope Francis has so wonderfully called it,” said the letter.

“As men and women of goodwill, we hear the cry of the poor and also the cry of the earth, who moans in labour pains,” it said, quoting from St. Paul’s Letter to the Romans. “And that is why, with great concern, we address you in the current conditions in which our threatened and tormented planet lives.”