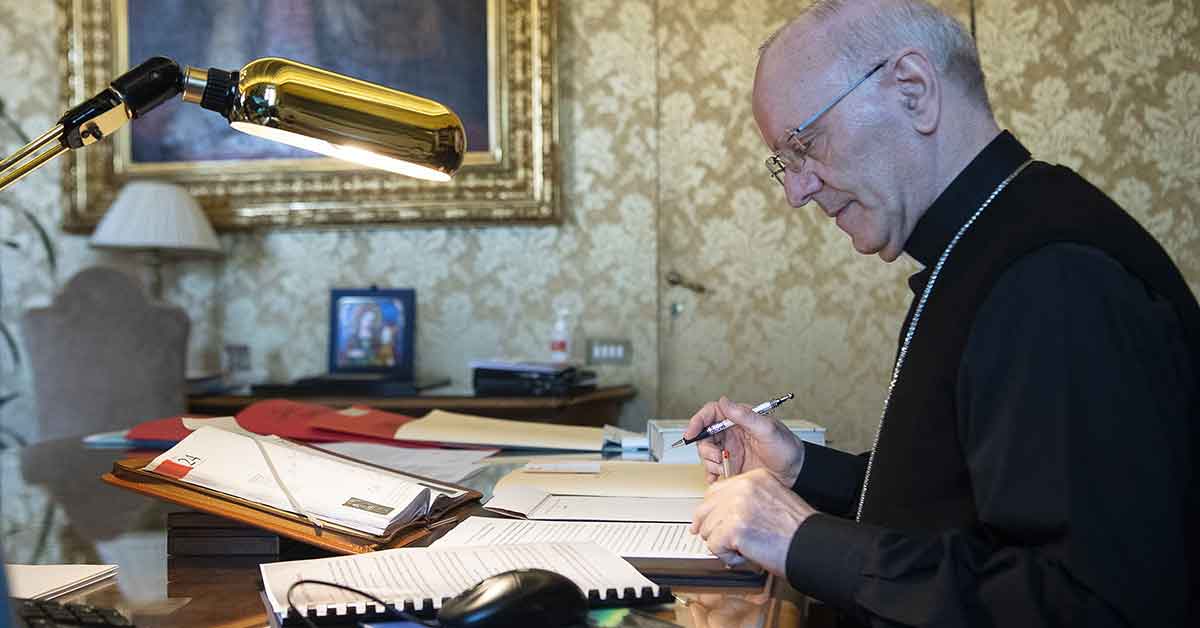 Bishop Nunzio Galantino, president of the Administration of the Patrimony of the Holy See, works at his desk in this photo published by Vatican News on Nov. 8, 2021. Bishop Galantino told Vatican News that reforms are ongoing to ensure Vatican financial management is “trustworthy and credible.” (CNS photo/Vatican Media)

By Cindy Wooden – The day after Catholics around the world heard the Gospel story of the widow’s mite, Vatican media published a long interview with the bishop who heads the Vatican’s investment office.

Bishop Nunzio Galatino, president of the Administration of the Patrimony of the Holy See, said reforms are ongoing to ensure Vatican financial management – care for the widow’s mite given to the pope and the Vatican – is “trustworthy and credible.”

“Certainly, there is a change of mentality at play that we are addressing under the guidance of Pope Francis,” the bishop said Nov. 8. “This type of change is always difficult to achieve quickly and together, in any sector or structure. It seems that what is being done, thanks to the procedure put in place, is going in the right direction.”

One of the most recent changes is Pope Francis’ decision to give Bishop Galatino’s office responsibility to manage the financial and property investments of the Vatican Secretariat of State.

That portfolio was the source of the huge financial disaster and scandal centred on a building on Sloane Avenue in London’s posh Chelsea district. The Financial Times reported on Nov. 8 that the Vatican is in the final stages of a deal to sell the property for the equivalent of more than $270 million, which would mean it would lose as much as $135 million on the property.

The Vatican City State court currently is trying 10 defendants, including Cardinal Angelo Becciu, on charges involving financial malfeasance and corruption in relation to the Sloane Avenue deal. But that isn’t going well, either; in early October, the court agreed with defence lawyers that some procedures, including giving the defence access to evidence, were not properly followed by investigators for the prosecution. The court is set to reconvene on Nov. 17 to determine how and when the trial will proceed.

Concrete actions have been taken to handle donations and resources with responsibility and ensure the Vatican bank and other financial offices are not being used for illegal activity. But those efforts have been going on for decades.

The Vatican has an ancient bureaucracy, a global pool of donors and a penchant for thinking that the loyalty and support for the church’s mission of a bishop or cardinal means a prelate should oversee the coffers while expert laity should be hired to help him with the technical details.

The parable of the widow’s mite and, especially, the story of Jesus driving the moneychangers out of the temple and occasionally spectacular shame-inducing human behaviour, have made some Vatican officials skittish about talking about money.

Reluctance to speak, though, easily can become secrecy.

And efforts to end the suspicion secrecy naturally spawns goes back even further than Pope Benedict XVI.

St John Paul II in 1990 named US Cardinal Edmund C. Szoka of Detroit to head the Prefecture for the Economic Affairs of the Holy See, the Vatican’s budget management office. The Vatican was still trying to clean house and recover trust after the 1982 fraudulent bankruptcy of Banco Ambrosiano, Italy’s largest private bank. While the Vatican always maintained it had done nothing wrong, the Vatican bank made what it called a $240 million “goodwill payment” to Banco Ambrosiano’s former creditors in 1984.

Cardinal Szoka, who died in 2014, arrived in the Vatican and shocked many of his fellow prelates: He held news conferences twice a year to explain the budget forecast and detail the final balances.

“I made that decision because there was a lot of curiosity and a lot of mythology about Vatican finances,” he had told Catholic News Service. “My goal was to have transparency.”

But after the US cardinal retired, the Vatican gradually cut back on the amount of detail provided publicly and stopped releasing a budget forecast altogether.

Then, in 2014, Pope Francis appointed Australian Cardinal George Pell to the newly created Secretariat for the Economy. He saw his task as consolidating the use of modern budgeting practices, beginning with giving the pope an accurate picture of the assets and expenditures of all Vatican offices, including the Secretariat of State.

In December of that year, Cardinal Pell said in an interview that the new budgeting and reporting procedures had meant his office discovered “some hundreds of millions of euros were tucked away in particular sectional accounts and did not appear on the balance sheet.”

The Vatican press office jumped in a day later to clarify that the money did not represent “illegal, illicit or badly managed funds,” just assets being held in numerous administrative offices that were not considered part of the main institutions of the Roman Curia.

At an early November meeting with Italian journalists to promote the Italian edition of his book about his months in an Australian prison before a unanimous decision of the country’s High Court cleared him on child sex abuse charges, Cardinal Pell said that if the Secretariat of State had allowed his office to monitor the account used to purchase the Sloane Avenue property, perhaps the Vatican’s loss would not have been so great.

Now, he said, the Vatican at least knows “we lost a bunch of pounds with that building in London, and that’s some progress.”

Bishop Galatino said 75% of the properties owned by the Vatican are “dedicated to institutional purposes or are allocated for schools, universities, convents (and) seminaries.” The small portion that is rented out on the open market is used to generate income to cover the charity and mission of the church.

“The Holy See’s budget cannot be compared to that of a company,” he said. “In fact, it is a ‘mission budget.’ Each dicastery and entity truly accomplishes a service. And each service has its costs but not necessarily revenue.”