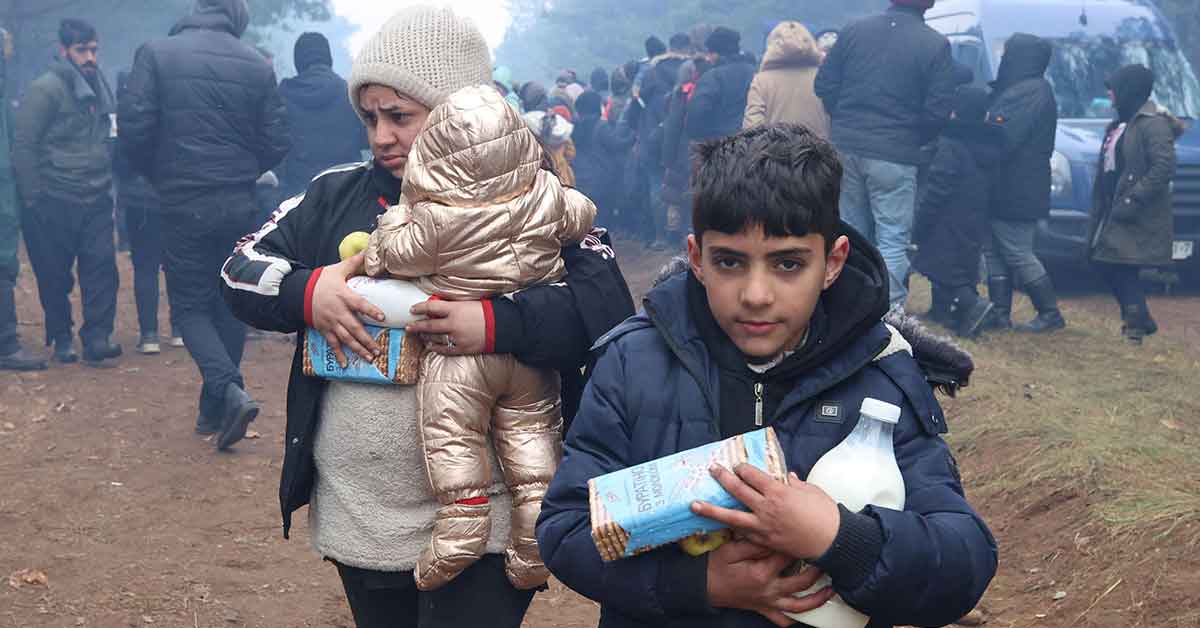 A woman and children carry food relief near a barbed wire fence as migrants attempt to cross the border with Poland from Belarus Nov. 10, 2021. Poland and the European Union claim Belarus had flown refugees from at least 20 countries to Belarus aboard Russian and Turkish state airlines and bused them to the border in retaliation for EU sanctions over its human rights abuses. (CNS photo/Leonid Scheglov, BelTA handout via Reuters)

As climate change rages along its disastrous path of increasing and more intense natural disasters – hurting the poor most of all – it now appears that a majority of people are finally beginning to admit climate change is for real – and that pollution from humans burning oil, gas and coal is the main cause.

But one disastrous possibility related to climate change most people do not yet seem to realise is that more armed conflicts, new wars and even nuclear war are dangerously becoming more possible.

As reported in a 2020 U.N. press release, Assistant Secretary-General for Europe Miroslav Jenca warned, “The climate emergency is a danger to peace.” He explained that record temperatures, unprecedented sea levels and frequent extreme weather events point to a dangerous future for the planet and for humanity, as lives and livelihoods are threatened, competition increases, and communities are displaced.

Jenca added that while no automatic link exists, climate change exacerbates current conflict risks and is likely to create new ones. As an example, he cites that in the Middle East and the Horn of Africa, the impacts of climate change have already deepened conflict and provided fuel for extremist groups .

As I write, a breaking story reported by The Guardian highlights how at least 1,000 refugees from countries including Iraq, Syria and Afghanistan are tragically being forced to remain in a freezing woodland borderline between Poland and Belarus with soldiers on both sides forcing them to stay out – and forbidding them to apply for asylum.

While it’s uncertain to what extent climate change is playing a role in this tragedy involving refugees from countries immersed in multiple armed conflicts, nonetheless, it is reasonable to note that these nations are also very arid countries where climate change is making growing food and obtaining adequate access to water even more difficult. And in general, we know that climate change has started to, and will, generate countless refugees – who are sadly not welcomed by most of the world’s nations.

Now adding to the desperate, unjust situation forced upon these hungry and freezing refugees – including young children – on the Polish-Belarus border, is the possibility that an armed conflict could break out between these two nations.

Since Poland is a member of NATO, and Belarus is a close ally with Russia, it is conceivable this situation could escalate into a war between NATO and Russia – which could devolve into a catastrophic nuclear war.

While this frightening, worst-case scenario is presently unlikely, it does point to how this, or something like this, could really happen in a worsening climate-changing world.

But in this case not just climate change, but armed conflicts, dysfunctional international relations, and outside powers jockeying for positions to their advantage are all inter-related tragic factors.

Pope Francis, in his famous environmental encyclical letter Laudato Si’ (“On Care for our Common Home”), encourages us to live and promote the concept of “integral ecology” – an understanding that everyone and everything is connected, and that “today’s problems call for a vision capable of taking into account every aspect of the global crisis”).

In light of the Glasgow international climate change gathering of world leaders, and their resulting inadequate commitments to address the growing dangers of climate change, it is most appropriate for us to boldly act on the Holy Father’s challenge in Laudato Si’ calling us to exert public pressure “to bring about decisive political action. … Unless citizens control political power – national, regional and municipal – it will not be possible to control damage to the environment”.

Pricking our consciences, Francis reflects, “What kind of world do we want to leave to those who come after us, to children who are now growing up?”