English, Welsh bishops Delay the Return of the Faithful to Mass 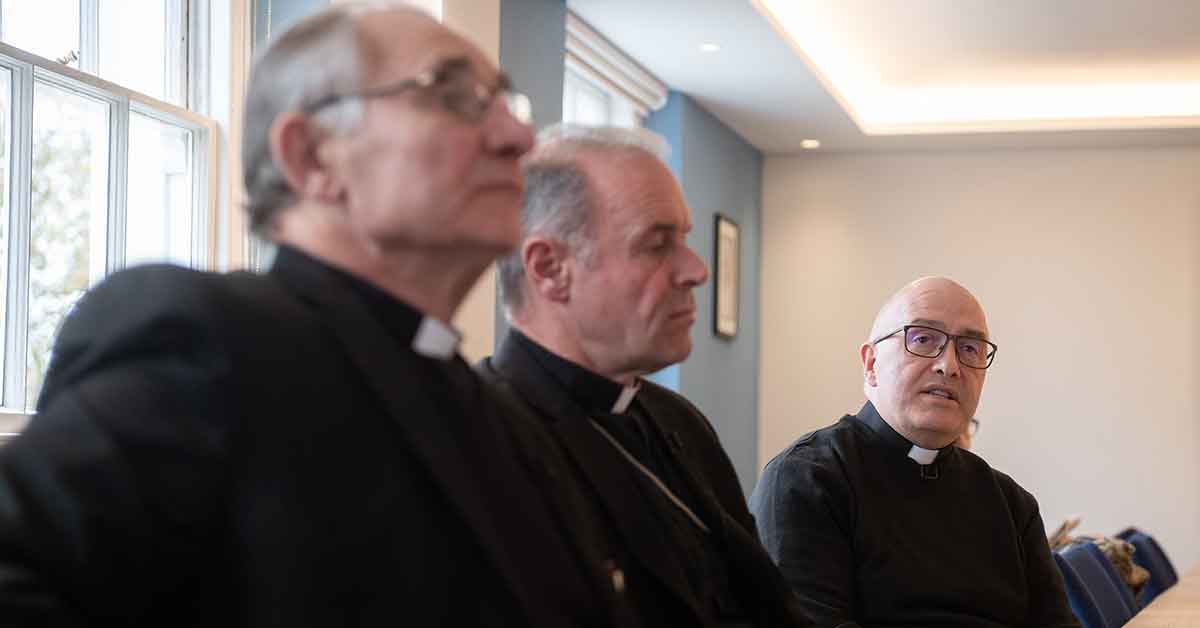 Auxiliary Bishop Paul McAleenan of Westminster, Bishop Paul Mason of the Bishopric of the Forces and Father Christopher Thomas, general secretary of the Bishops’ Conference of England and Wales, attend a news conference in London Nov. 19, 2021. The bishops announced a delay in their plans to restore the obligation to go to Mass on Sundays because of the continuing COVID-19 pandemic. (CNS photo/Marcin Mazur, courtesy Bishops’ Conference of England and Wales)

By Simon Caldwell – The Catholic bishops of England and Wales announced a delay in their plans to restore the obligation to go to Mass on Sundays because of the continuing Covid-19 pandemic.

In July, they set a target to return the first Sunday of Advent, which falls November 28, but at their annual plenary assembly in Leeds, they agreed that the prevalence of the coronavirus made it too dangerous for many vulnerable people to attend Mass.

“The pandemic is clearly not over,” they said in a statement called “Honouring Sunday,” issued after their mid-November meeting.

“The risk of infection is still present. For some, there is legitimate fear in gathering together,” they said in the November 19 statement.

“As your bishops, we recognise that these prevailing circumstances suggest that not everyone is yet in the position to fulfil the absolute duty to attend freely Sunday Mass.”

When asked at a November 19 news conference in London if Catholics would be committing a sin if they failed to attend Mass on Christmas this year, Father Christopher Thomas, general secretary of the bishops’ conference, simply replied: “No.”

In their statement, the bishops suggested, however, that Catholics should strive to go to Mass if they were not vulnerable.

They noted that “the livestreaming of the Mass and the remarkable response of our Catholic communities to those in need have provided comfort, sustenance and resilience.”

But they said: “We now encourage all Catholics to look again at the patterns which they have formed in recent months with regard to going to Mass on Sundays. … This would include consideration and reflection about what we might do on Sundays, such as sports or shopping, or other leisure and social activities.

“This review, and the decisions which arise from it, fall to every Catholic, and we trust this will be done with honesty, motivated by a real love for the Lord whom we encounter in the Mass,” they added.

Over the last year a vaccination program has been rolled out to all adults in the United Kingdom, and 20% of them are now “triple jabbed,” so the death rate rarely exceeds 200 a day. The risk of infection nonetheless remains high.

At the London news conference, the bishops also announced plans for the relics of St Bernadette of Lourdes to tour England, Scotland and Wales in late 2022.

They also said they would be inviting Catholic parishes to help to resettle an estimated 20,000 refugees from Afghanistan in England and Wales and announced plans to train bishops and priests in safeguarding practices to prevent abuse.

Bishop John Arnold of Salford, speaking via a video link, also spoke of his disappointment that the U.N. Climate Change Conference failed to agree to “phase out” coal power, choosing instead to “phase down” the reliance of major economies on the fossil fuel.

Tags: Church in EnglandChurch in Wales