Pope: Advent during pandemic remains a season of compassion 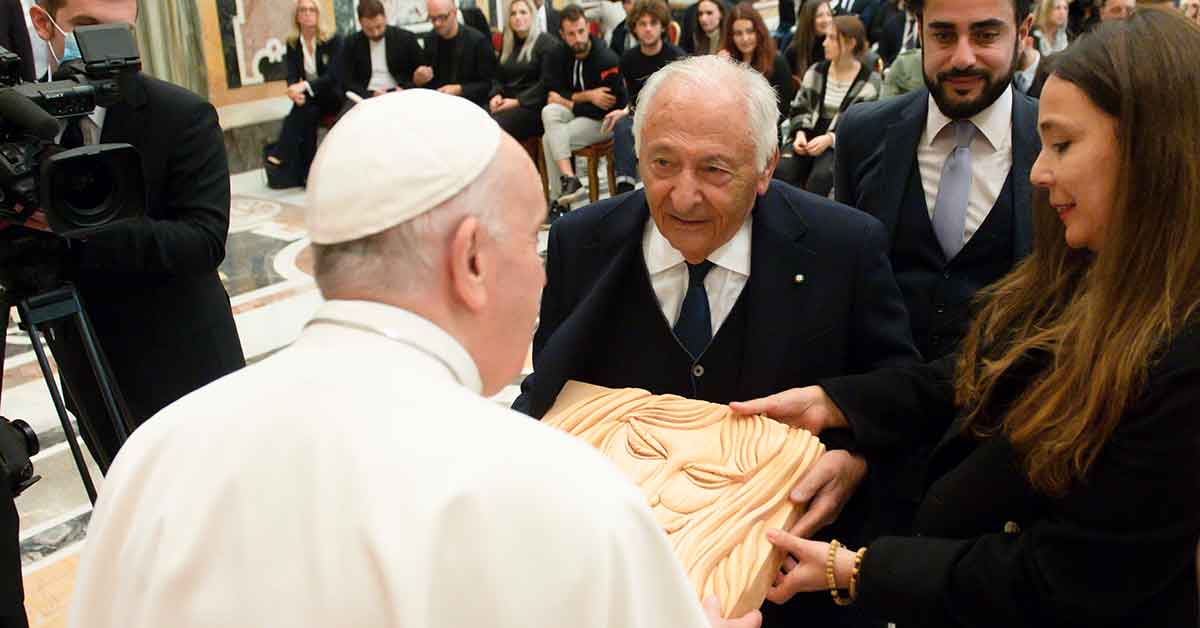 Pope Francis accepts a gift during an audience with Christmas music contest participants at the Vatican Nov. 22, 2021. (CNS photo/Vatican Media)

By Carol Glatz – With Advent coming during an ongoing pandemic, Christians are called to hold on to hope and foster a season of compassion and tenderness, Pope Francis said.

During Advent this year, too, “its lights will be dimmed by the consequences of the pandemic, which still weighs heavily on our time,” he said Nov. 22. “All the more reason why we are called to question ourselves and not to lose hope.”

“The feast of the birth of Christ is not out of tune with the trial we are going through because it is the quintessential feast of compassion, the feast of tenderness. Its beauty is humble and full of human warmth,” the pope said during an audience with organisers and participants in a Christmas music contest. The contest was proposed and promoted by the Pontifical Foundation Gravissimum Educationis and Don Bosco Valdocco Missions association, based in Turin.

The contest invited people between the ages of 16 and 35 to produce new songs inspired by Christmas and its values: life, love, peace and light, according to the initiative’s website, christmascontest.it/en/. Contestants were competing in three categories: lyrics, music and interpretation, and the best three pieces will be performed during the 2021 edition of the annual Christmas concert at the Vatican.

The pope thanked the groups who came up with the idea for the contest, “which gives voice to the young, inviting them to create new songs inspired by Christmas and its values.”

“The beauty of Christmas shines through in the sharing of small gestures of genuine love. It is not alienating, it is not superficial, it is not evasive,” he said.

The beauty of Christmas “expands the heart, opening it up to gratuitousness – gratuitousness, a word artists understand well! – to the giving of self,” and it can also foster cultural, social and educational life and activities, he added.

Pope Francis quoted what St Paul VI told artists during Advent in 1965: “This world in which we live needs beauty in order not to sink into despair.”

It must not be the false beauty “made of appearances and earthly riches, which are hollow and a generator of emptiness,” Pope Francis said. It must be the real beauty “of a God made flesh, the one of faces – the beauty of faces, the beauty of stories” and the beauty of “creatures that make up our common home.”

He thanked the young people, artists and other participants “for not forgetting to be custodians of this beauty that the nativity of the Lord makes shine in every daily gesture of love, sharing and service.”