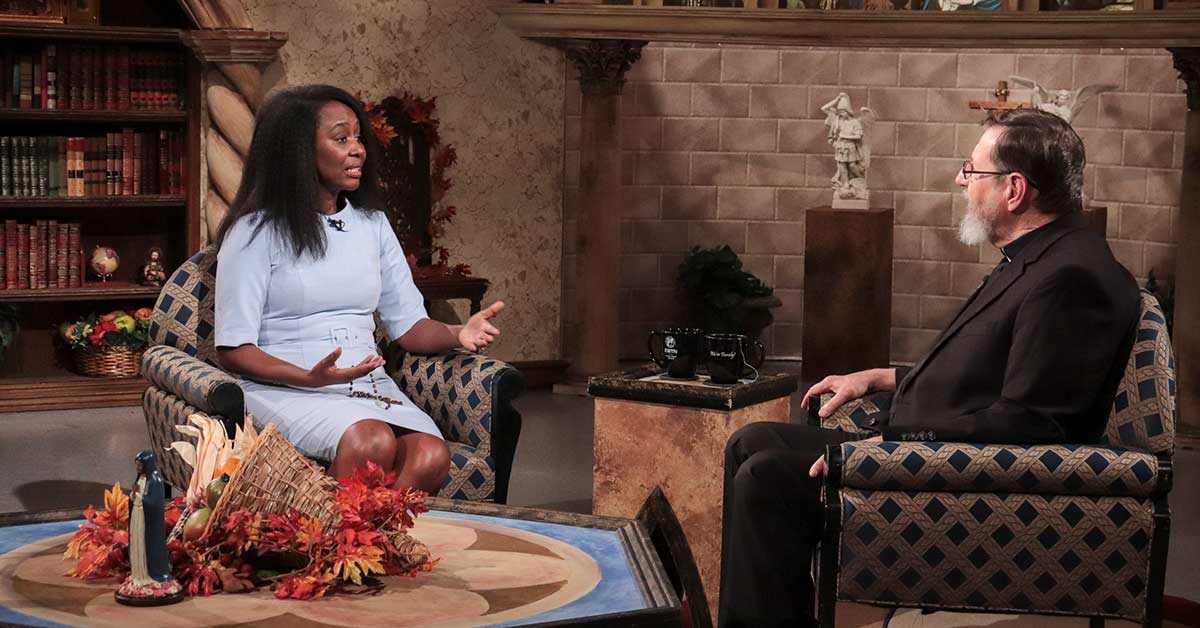 Many have heard of the horrific genocide that took place in Rwanda in 1994, when 200,000 Hutus slaughtered 800,000 Tutsis and some moderate Hutus – their own countrymen. But few are aware that Our Lady warned the country about the impending disaster – and how to avoid it – during a series of apparitions to three schoolgirls 12 years earlier.

The visions of destruction, torture, and human carnage as well as a river of blood viewed by one of the visionaries were so terrifying that the young girl told Our Lady she was afraid she would never be able to sleep again.

The premiere will be preceded at 15:00 on Wednesday, November 24, on “EWTN Live” with Immaculée IIlibagiza, who appears prominently in the docudrama. Immaculée is the woman who told the world about the genocide in the 2017 best-selling book Left to Tell, which was later made into a well-known documentary by the same name.

In addition to observations from Immaculée, the docudrama includes footage of the actual Rwandan school girl visionaries, the mental torture they endured by those who did not believe them, the doctors who were charged with determining if they were mentally ill, and church officials who made the final determination.

Among other things, Our Lady of Kibeho requested that the people of Rwanda pray the Seven Sorrow Rosary, a devotion given to St Bridget centuries earlier which had largely been forgotten. During the genocide, the sisters at the convent school the visionaries attended prayed this rosary from morning to evening. All survived the bloodbath. (Find meditations on the Seven Sorrows Rosary and more in this little booklet from EWTNRC: https://bit.ly/7SorrowsRosary

Our Lady first appeared to Alphonsine Mumureke, a student at Kibeho High School, on Nov. 28, 1981. She asked Alphonsine to tell people that they needed to convert. But Immaculee tells us that Alphonsine was a “regular” girl, not known for her piety so no one believed her. Unfortunately, their unbelief morphed into physical persecution. The young girl begged Our Lady to appear to another girl so she would be believed.

On January 12, 1982, Our Lady answered Alphonsine’s prayer by appearing to Nathalie Mukamazimpaka, a fellow student with a sterling reputation who was known for her piety. Things got somewhat better, but there were still many who did not believe. The worst of the persecutors was a tough girl named Marie Claire Mukangango who received her own apparition on March 2, 1982.

During apparitions with Marie Claire, Our Lady spent much time weeping. She said she was sad because so many did not believe her warnings. It was Marie Claire to whom she gave the visions of “destruction, torture, and savage human carnage.” Those visions were, of course, a preview of the genocide that would tear the country apart a dozen years later. In fact, online accounts of the history of this conflict are eerily prescient of problems that persist in the world today.

Each girl was given specific groups of people for whom to pray, but interestingly it was again Marie Claire who was taken on a trip to the three places about which Catholics so often hear. The first was a place where people were in terrible pain, fighting, and extremely angry. Our Lady told her this place was “for those who will suffer eternally, who will never be forgiven.” She then went to a place where there was little light, and where there was suffering, but less than in the first place, and “where people seemed to be expecting somebody to come and help them.” Finally, she was taken to a place with a beautiful light, brighter than the sun, where she could hear beautiful voices. She was told it was for “those who have light in their heart, the place of those who respect God.”

When Marie Claire asked Our Lady why she had showed her these places, Out Lady said: “I showed you so you know the life that matters most is what is coming after this life on earth. Go and tell everyone. Encourage them to live the right way. Tell them to live without respecting God is the ultimate waste of time. They will regret it bitterly.” Our Lady also said: “You have to tell the people that these places actually exist. To refuse Jesus is to refuse paradise.”

Marie Claire was also the visionary to whom Our Lady taught the Seven Sorrows Rosary, which the docudrama explains in detail. Our Lady said it is important we say this rosary “to help Jesus to save the world.”

Our Lady said to Marie Claire: “Tell the sisters [at the convent school the visionaries attended] that they must love the rosary: the Seven Sorrows Rosary and the traditional rosary. Tell them to say it with their hearts, being conscious of who they are talking to. Tell them to ask for strength to help them accomplish the promises they made to God. Remind them to always show love to each other so that others may take the example from my daughters. Tell them to be a true reflection of my love to everyone that they meet, everywhere they go, imitating my behaviour and virtues.”

There is so much more to tell about these apparitions. This is a story no one who cares about eternal life should miss. In fact, in advice that seems equally applicable to us today, we are told in the film that one of Our Lady’s biggest sorrows was that “few people truly listened to the advice and counsel she had given to her visionaries,”.

The question for us decades later is: Will we?

EWTN is available in South Africa on StarSat (see www.ewtn.com or contact africadesk@ewtn.com)