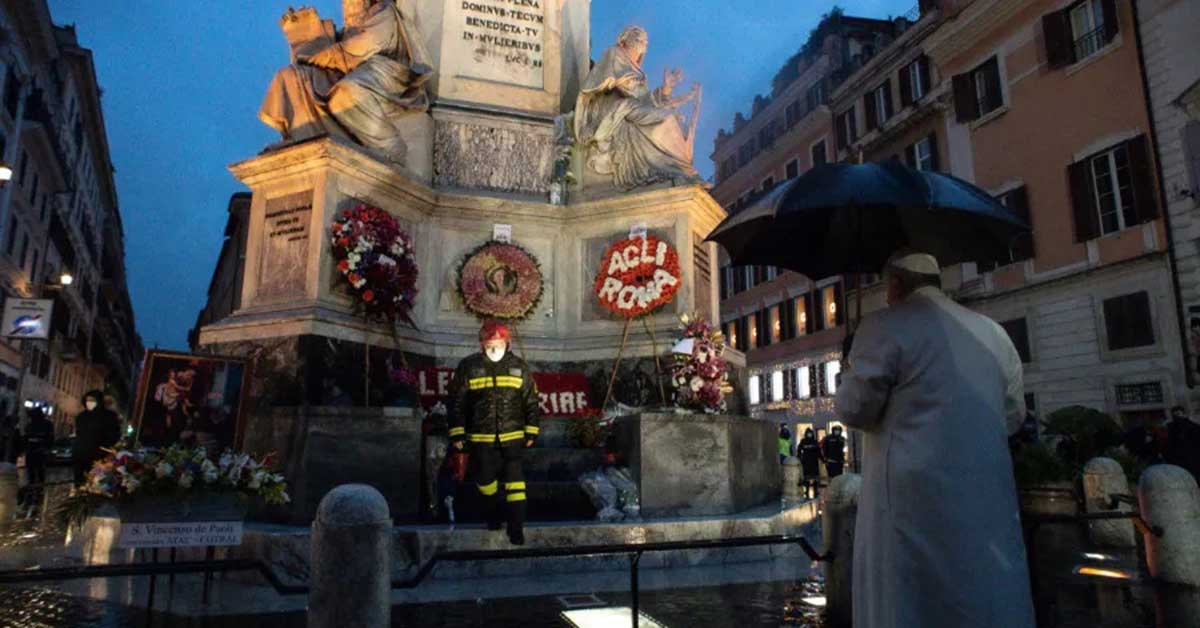 For the second year in a row, Pope Francis has cancelled the Roman tradition of a public gathering at the Spanish Steps on December 8 to venerate a statue of the Immaculate Conception.

The Holy See press office announced on Nov. 27 that instead of the usual outdoor public ceremony, the pope will instead perform a private act of devotion to Our Lady to avoid the formation of a crowd and the risk of spreading the coronavirus.

The pope will ask the Virgin Mary in prayer “to protect the Romans, the city in which they live, and the sick who need Her maternal protection everywhere in the world,” the statement said.

The announcement came after the Italian government unveiled further Covid-19 restrictions entering into force on Dec. 6.

Under the new restrictions, unvaccinated people in Italy will be unable to dine indoors at restaurants, go to the gym, visit museums and other tourist sites, or attend weddings or other public ceremonies until at least Jan. 15.

The pope laid a bouquet of white roses at the base of the nearly 12-m high column which holds the statue of the Immaculate Conception near the Spanish Steps.

The statue was dedicated on Dec. 8, 1857, three years after Pope Pius IX promulgated a decree defining the dogma of the Immaculate Conception of Mary.

Since 1953, it has been a custom for popes to venerate the statue on the feast day. Pius XII was the first to do so, walking nearly two miles from the Vatican.

Rome’s firefighters are usually in attendance at the prayer, in honour of their role at the 1857 inauguration of the statue. The mayor of Rome and other officials also attend.

In addition to Pope Francis’ surprise visit to the statue last year, the pope also visited the Basilica of St. Mary Major, where he prayed before the icon of Salus Populi Romani, Mary Protection of the Roman People.

The pope also offered Mass in the basilica’s Chapel of Nativity, before returning to the Vatican.

Pope Francis is scheduled to preside over several public liturgies in December, including Mass at 7:30 p.m. on Dec. 24 and the Urbi et Orbi blessing in St. Peter’s Square on Dec. 25 at noon.