Pope Francis: Christ is not like other kings, he is a King for others 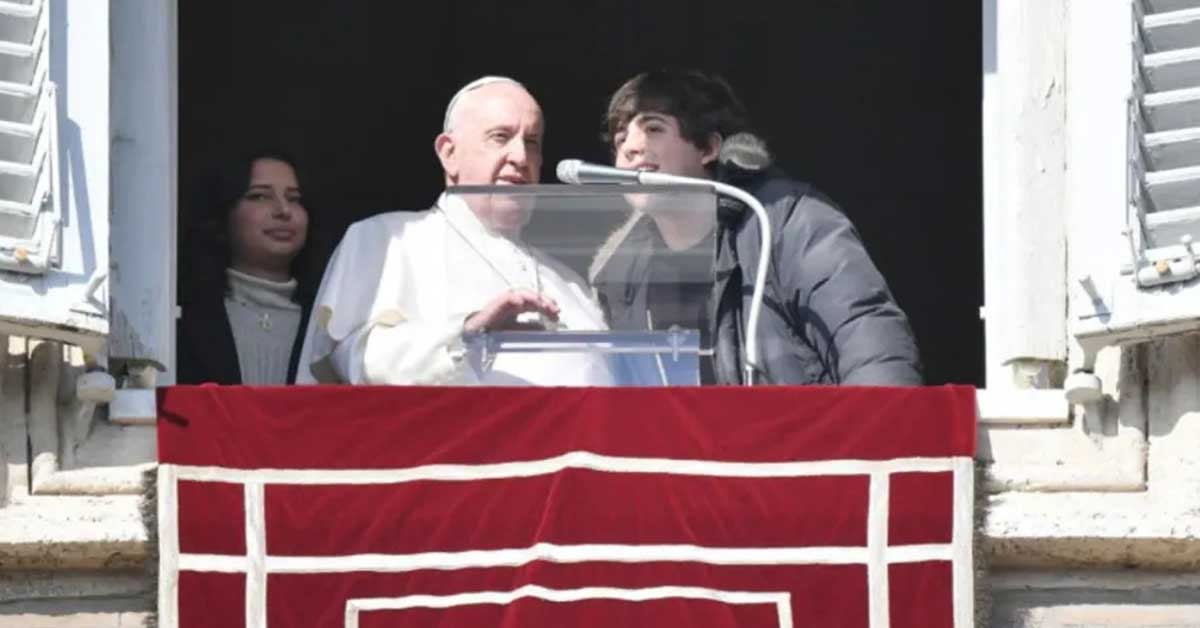 Pope Francis invited the young people beside him to offer a greeting. After the young woman wished pilgrims a happy World Youth Day, the pope urged the young man to his left to “say something creative.” The youngster responded by saying: “Let us testify that believing in Jesus is beautiful.” (Photo: VaticanMedia)

Pope Francis said on Sunday that Christ is “not like other kings, but he is a King for others.”

In his Angelus address on the feast of Christ the King, the pope underlined that Jesus’ kingship is “completely different” than that of worldly rulers.

“His kingship is truly beyond human parameters. We could say that he is not like other kings, but he is a King for others,” he said.

The pope was giving his live-streamed address at a window overlooking St. Peter’s Square on the day that the Catholic Church celebrates World Youth Day. He was flanked by young people from the Diocese of Rome.

He dedicated the address to Sunday’s Gospel reading, in which Jesus acknowledges that he is a king before Pontius Pilate, governor of the Roman province of Judaea.

“Let us reflect on this: in front of Pilate, Christ says he is a king at the moment in which the crowd is against Him; but when the crowd was following and acclaiming him, he remained distant from this acclamation,” the pope observed.

“That is, Jesus is showing that he is sovereignly free from the desire of earthly fame and glory. And we — let us ask ourselves — do we know how to imitate him in this aspect? Do we know how to govern our tendency to be continuously sought after and approved, or do we do everything to be esteemed by others?”

“So, I ask: what matters? Is it applause or service that matters about what we do, particularly concerning our Christian commitment?”

The pope said that Jesus was a king who liberated his followers.

“Dear brothers and sisters, he frees us from being subject to evil. His Kingdom is liberating, there is nothing oppressive about it. He treats every disciple as a friend, not as a subject,” he said.

“Even while being above all sovereigns, he draws no dividing line between himself and others. Instead, he wants to have brothers and sisters with whom to share his joy.”

He went on: “We do not lose anything in following him — nothing is lost, no — but we acquire dignity because Christ does not want servility around him, but people who are free.”

The pope emphasised that truth is the bedrock of Christian freedom.

“Being with Jesus, we become true,” he said. “The life of a Christian is not a play in which you can don the mask that best suits you. For when Jesus reigns in the heart, he frees it from hypocrisy, he frees it from subterfuge, from duplicity.”

“The best proof that Christ is our king is detachment from what pollutes life, makes it ambiguous, opaque, sad. When life is ambiguous — a bit here and there — it is sad, very sad.”

Pope Francis noted that all Christians were sinners, but said that Christ’s kingship saved them from falling into corruption.

After praying the Angelus, Pope Francis said that Sunday marked the first time that World Youth Day was being celebrated in dioceses on the Solemnity of Christ the King. The annual event was previously observed on Palm Sunday.

He marked the occasion by celebrating a morning Mass in St. Peter’s Basilica.

“I cordially greet the young boys and girls from our diocese, and I hope that all the young people in the world might feel that they are a living part of the Church, protagonists of her mission,” he said.

He invited the young people beside him to offer a greeting. After the young woman wished pilgrims a happy World Youth Day, the pope urged the young man to his left to “say something creative.”

The youngster responded by saying: “Let us testify that believing in Jesus is beautiful.”

“See that,” the pope exclaimed. “This is beautiful. Thank you.”

The pope then spoke about World Fisheries Day, which falls on Sunday.

“I greet all fishermen and I pray for those living in difficult conditions, unfortunately, sometimes in forced labour,” he said, offering encouragement to chaplains and volunteers of Stella Maris, a Catholic charity helping seafarers worldwide.

Noting that Nov. 21 is the World Day of Remembrance for Road Traffic Victims, the pope also called for prayers for those affected.

“I would also like to encourage the United Nations’ initiatives currently underway toward achieving greater control over the arms trade,” he added.

Before greeting pilgrims in the square below, including those from Poland and the United States, the pope asked for a round of applause for the Church’s newest blessed.

He said: “Yesterday in Katowice, in Poland, Jan Franciszek Macha was beatified, killed in hatred of the faith in 1941 within the context of the persecutions against the Church during the Nazi regime.”

“In the darkness of his prison, he found in God the strength and meekness to face that calvary. May his martyrdom be a fruitful seed of hope and peace.”