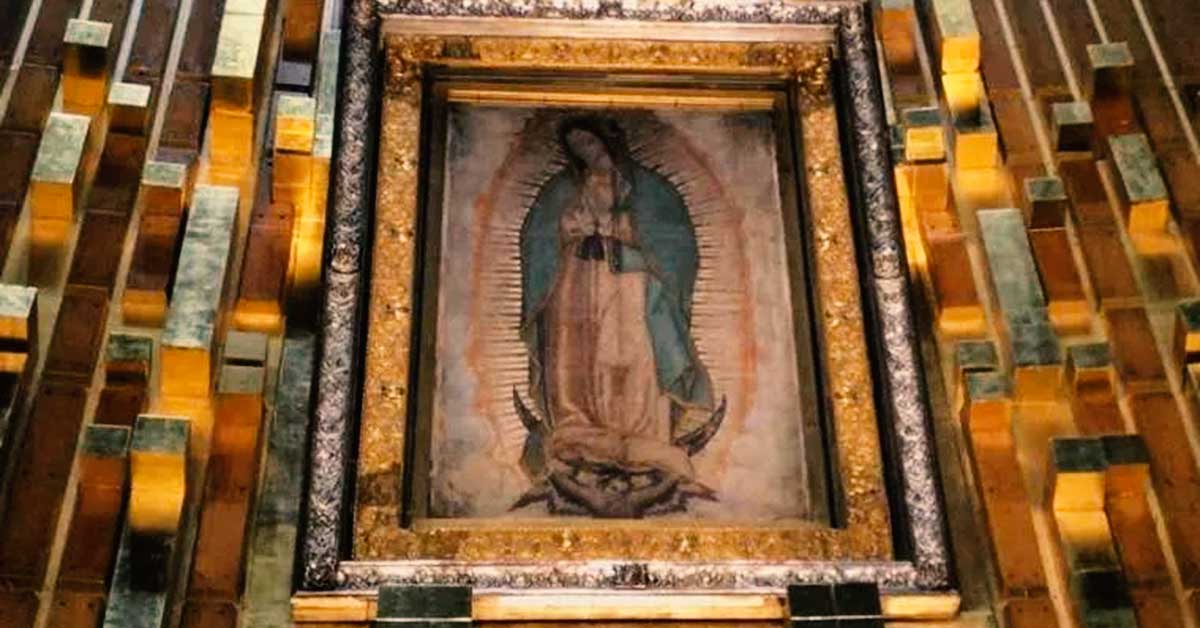 The image of Our Lady of Guadalupe in Mexico City, Mexico. (Photo: David Ramos/CNA)

A century ago, in 1921, there was an attack perpetrated against Our Lady of Guadalupe in the old basilica in Mexico City, in which the Marian image was protected by a crucifix.

“November 14 marks the 100th anniversary of the terrible attack against the Blessed Virgin of Guadalupe. They wanted to destroy her blessed image,” Father Eduardo Chávez, doctor in Church history and general director of the Institute of Guadalupan Studies, told CNA’s sister agency ACI Prensa.

“We also commemorate 100 years of the wonderful testimony of our Lord Jesus, since it was he who covered, cared for and protected his mother and our mother Saint Mary of Guadalupe,” said Chávez, who was postulator of the cause of canonisation of St Juan Diego, to whom the Virgin Mary appeared.

On November 14, 1921, a bomb exploded that a man had hidden in some flowers that he placed in the basilica.

“Around 10:30 in the morning, a dynamite bomb went off hidden among the flowers. The damages were at the steps of the altar, which are made of marble, the brass candlesticks, and the Sacred Image of our Crucified Lord, that fell to the ground and was left bent,” indicates the story that is in the back of the current basilica, with the crucifix and the photos that were taken after the attack.

The explosion bent the crucifix, which is now known as “Santo Cristo del Atentado,” or “Holy Christ of the Attack.”

“Testimony of this is the Christ who is bent and that we have here in the Basilica of Guadalupe itself as a testimony of the immense love of God, of the marvellous love of God for her and for all of us who still have her here,” Chávez said.

The story recalls that the glass of the painting that protected the image of the Virgin of Guadalupe “did not even crash” after the explosion.

The attack was the prelude to what years later would be religious persecution in Mexico, during the government of Plutarco Elías Calles.

Chávez told ACI Prensa that the Virgin of Guadalupe “takes away our fear” and “gives us the faith and hope to live in love.”

The priest recalled that “the most holy image of Guadalupe carries Jesus in her womb, in her immaculate womb. It is the centre of the same image and that is why it is a sign of the Church.”

In this sense, he explained, “when trying to destroy the image, they tried to destroy the Church itself and they could not because this comes from God.”

“Just as Saint Mary of Guadalupe, in her marvellous image, is the work of God, so the Church is also the work of God. Christ is the head of this blessed church that proclaims truth, justice, love, forgiveness, mercy, what our people need so much today,” Chávez said.

“Since they could not destroy the image of the Virgin of Guadalupe, we must never destroy it in our hearts, in our family, our community, our Church,” Chávez said. “The Virgin of Guadalupe is here to give us Jesus Christ our Lord, her beloved Son, He who is the centre of the Church.”

Tags: Our Lady of Guadalupe