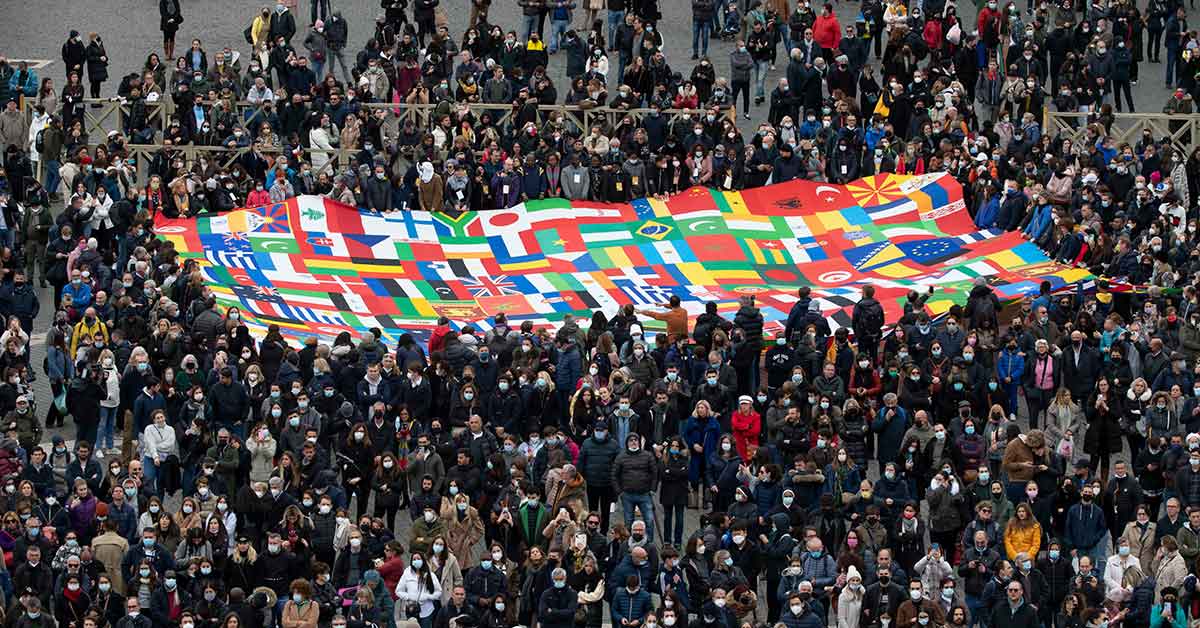 People in St. Peter’s Square at the Vatican attend the Angelus led by Pope Francis from the window of his studio overlooking the square Nov. 28, 2021. (CNS photo/Vatican Media)

By Junno Arocho Esteves  –  Vigilance is an important aspect of Christian life because it prevents one’s spirituality from becoming mediocre and lazy, Pope Francis said.

During his Sunday Angelus address Nov. 28, the pope said Jesus’ call to his disciples to “be vigilant at all times” is a warning for all men and women in the church not to become “sleepy Christians” who are “anaesthetised by spiritual worldliness.”

“This leads to ‘dozing off,’ to moving things along by inertia, to falling into apathy, indifferent to everything except what is comfortable for us,” he said. “This is a sad life going forward this way, since there is no happiness.”

Reflecting on the Gospel reading for the first Sunday of Advent, the pope said despite Jesus’ foretelling of “bleak and distressing events,” he comforts his followers by encouraging them to “stand erect and raise your heads because your redemption is at hand.”

While it is possible to be absorbed with life’s difficulties and anxieties, he continued, Jesus “points the way with a strong reminder” to “be vigilant at all times and pray.”

“We need to be vigilant so that our daily life does not become routine, and, as Jesus says, so we are not burdened by life’s anxieties,” he said. “So today is a good moment to ask ourselves: What weighs on my heart? What weighs on my spirit? What makes me go to sit in the lazy chair?”

Christians who ask those questions can guard themselves against apathy, which “makes us slide into sadness; it takes away zest for life and the will to do things, the pope said.

Pope Francis said the “secret to being vigilant is prayer,” which “keeps the lamp of the heart lit.”

During Advent, he said, people should make a habit of praying, “Come, Lord Jesus,” especially when they find their “enthusiasm has cooled down.”

“Prayer reawakens the soul from slumber and focuses it on what matters, on the purpose of existence,” the pope said. “Even during our busiest days, we must not neglect prayer.”