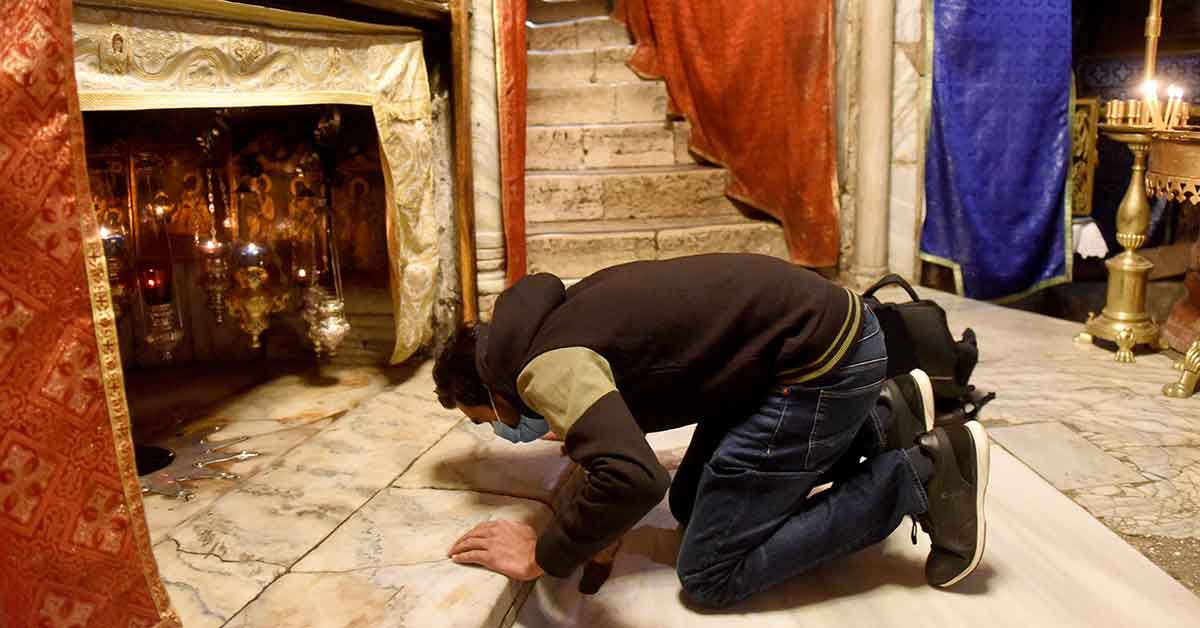 Shakti Gohil, an Indian worker in Israel, prays in front of the star in the grotto of the Church of the Nativity in Bethlehem, West Bank, Dec. 15, 2021. Few tourists are visiting Bethlehem this Christmas season; as the omicron COVID-19 variant began to spread late in November, Israel closed its borders to foreign travellers. (CNS photo/Debbie Hill)

By Judith Sudilovsky – A prominent Catholic leader expressed anger at an Israeli policy that allows a Jewish roots programme to bring in participants despite a ban on travellers. An Israeli spokesman denied the claim.

Allowing young Jews from abroad to come to Israel on the Birthright program while not allowing Christian pilgrims and tourists in during the Christmas season is discriminatory, Wadie Abunassar, an adviser to the Assembly of Catholic Bishops, wrote on his Facebook page.

As the omicron COVID-19 variant began to spread late in November, Israel closed its borders to foreign travellers, extending the ban until  Dec. 21, and then to Dec 29. However, it has been allowing participants on the Birthright roots programme to enter Israel.

“Such discrimination is illegal … and unethical,” Abunassar wrote. “Racist discrimination should never be accepted in any way! I urge the Israel authorities to treat all those who want to visit the country equally without any discrimination between one religion and another.”

In a statement released Dec. 16, the Ministry of Foreign Affairs said it “rejects and condemns” the “unfounded allegations of discrimination,” calling them “outrageous, false and dangerous.”

The statement said changes in the regulations regarding entry to Israel because of the new variant include a ban on tourists entering the country. However, the statement said, an exceptions committee has examined hundreds of requests recently “without bias or discrimination toward any race or religion” and has issued numerous permits to both Jews and Christians.

Israeli officials say exceptions have been made for priests at Christmas and allegations of discrimination are unwarranted.

“Some of the approved requests were those that came from the church authorities in Israel, including permits for priests to enter the country for the upcoming Christian holidays,” the statement said.

Tags: Church in IsraelChurch in Palestine