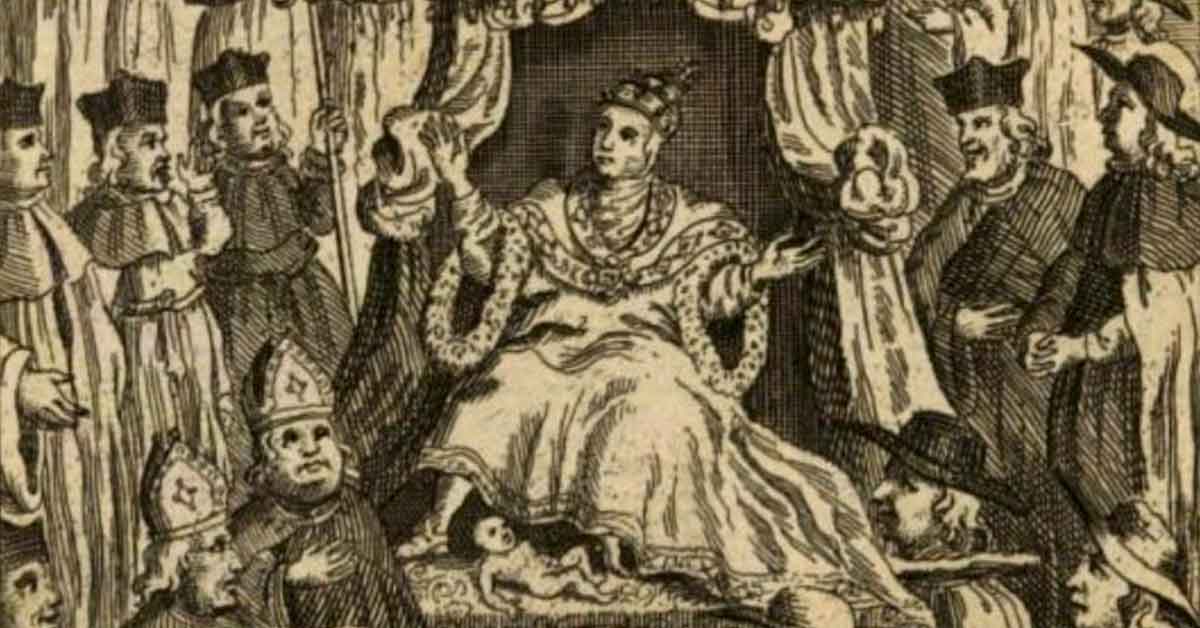 An engraving of Pope Joan, a Roman legend that dates from the 11th century, is illustrated in the 17th-century book, “A Present for a Papist: or, The History of the Life of Pope Joan, From her Birth to her Death,” by Alexander Cooke. (CNS photo/Google Books, Public Domain)

By Carol Glatz – Intelligent, in love, highly cultured and heavily pregnant, the infamous “Pope Joan” is one of those urban legends of the “urbi” of Rome about a woman who covertly climbed the clerical ladder in the ninth century and was elected Pope John VIII.

Conveniently, being beardless was the custom for priests in the West, a Vatican archivist explained. So, the legend says, her cover was blown only after two and a half years when her horse took a fright during a procession near St. John Lateran, triggering spontaneous labour and the instantaneous birth of a child – events colourfully chronicled in numerous paintings, books and some films.

That a woman apparently became the pope is why the legend insists that a special chair, with a large open keyhole shape in the middle, would be used from that day on at each enthronement ceremony at St. John Lateran so a deacon could verify a new pope’s gender, Msgr. Stefano Sanchirico noted.

But is any of this true? That was the question the longtime Vatican official discussed on Dec. 14 at the Oratorians’ Santa Maria in Vallicella church in Rome. The event, “Pope Joan: Between Ritual and Myth,” was sponsored by the archive of the Oratorians, the religious congregation founded by St. Philip Neri.

Msgr. Sanchirico, an official at the Vatican’s apostolic archive, is an expert in papal ceremonies and protocol, who spent years as a papal master of ceremonies and prelate of the Prefecture of the Papal Household after working at the Congregation for Catholic Education.

In fact, “the legend does not emerge at the same period of time” as the supposed events, but crops up 250 years later, he said. The myth fell into oblivion after the 13th century, he said, but returned to popularity during the contentious period of the Protestant Reformation.

However, he told his audience, this tall tale is like a mosaic in which a tiny number of tiles represents the truth, and too many creative hands inserted them into a wildly inaccurate picture. 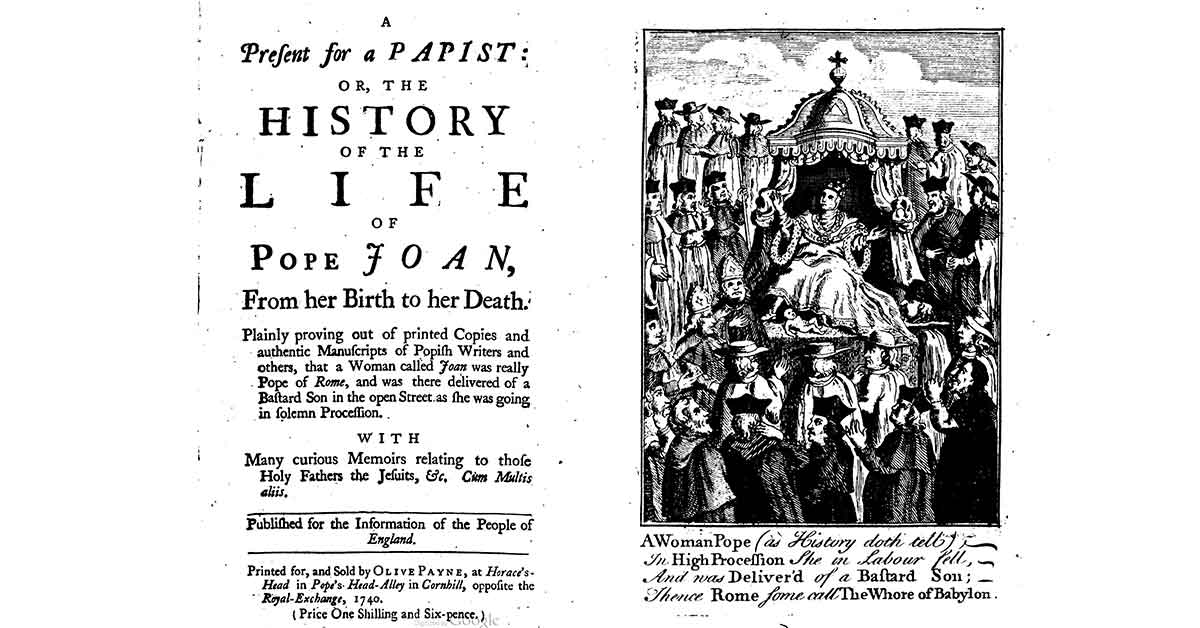 One element of truth, he said, is the existence of a “pierced chair,” although its purpose was not to verify the pope’s gender.

The chair was used in the ancient ritual for a newly elected pope when he took formal possession of the palace and Basilica of St. John Lateran, the seat of the bishop of Rome. This ceremony could take place just before or after the pope’s consecration and coronation in St. Peter’s Basilica, which established him as the successor of St. Peter, he said.

According to the enthronement ceremony’s ancient protocols, he said, the new pope entered the cathedral to sit on a white marble “sedia stercoraria” as a reminder of the chair’s original function as an “excrement” or toilet chair.

This gesture of humiliation reinforced the fact that, even though the pope is invested with great power, he is not God; he is still a human being, subjected to the necessities of nature like everyone else, including death. While seated, Psalm 113 was chanted, which praises a lofty, yet benevolent God who lifts the poor out of the dust and “the needy out of the dunghill.”

Next, Msgr. Sanchirico said, the pope would be seated on the white marble “cathedra,” perched atop a series of steps to symbolise episcopal power and responsibility, the authority to teach and the duty to protect his flock from evil. This chair is still used today when a pope formally takes possession of the chair of the bishop of Rome.

In the ancient ceremony, the new pontiff also sat on two dark red marble chairs with large, keyhole-like openings in the seat, which one modern scholar has argued were birthing chairs used in ancient Imperial Rome.

In the papal ritual, Msgr. Sanchirico said, on one chair the pope would receive his “ferula,” or pastoral staff to symbolise governance, and he would be given the keys of the cathedral and palace to signify the power of opening and closing, of binding and loosing.

On the second chair, he would be girded with a belt from which hung 12 precious stones to symbolise the 12 tribes of Israel and the 12 apostles, he said.

The holes in the chair “gave rise to the idea that the ritual” was to check the pope’s gender, the monsignor said, but “its meaning is quite different.”

While a pregnant Pope Joan is pure myth, he said, maternal images abound in explanations of the role of the pope and the Diocese of Rome, particularly as the “Ecclesia Mater,” the mother church.

Msgr. Sanchirico said the ceremonial use of the chairs preceded the years of Pope Joan’s supposed reign from 855-858, thereby debunking the later and incorrect interpretation or invention that a new pope sat on the unusual chairs to verify his gender.

Over time, he said, some popes were reluctant to use the “pierced” chairs as the rituals lost their meaning and were no longer understood; Pope Leo X was the last pope to use the pierced chairs in the early 16th century.

Msgr. Sanchirico also showed his audience a colour copy of an ancient manuscript found “a few years ago,” which he said may explain where the idea of a female Pope John VIII came from and why a particular road, not far from St. John Lateran, would become the place where Pope Joan supposedly gave birth and be nicknamed “Popess Lane.”

The Latin text, he said, says a homeowner named Giovanni Papa (John Pope) was due eight coins from the papal treasury for expenses incurred decorating a portion of the street used for a papal procession near where the alleged Pope Joan gave birth. A copy of the record shows the money was received by “papissa,” who could have been a female relative of the Papa family.

“A completely incorrect interpretation” of the text easily provides all the right ingredients – “Pope,” “John,” “eight” and “popess” – for cooking up a tantalising legend of a female Pope John VIII, who would be connected to a particular street that later popes reportedly “avoided like the plague” during processions, he said.

No female pope existed, the monsignor concluded, but “clearly there are facts that if they are placed incorrectly give birth to a whole other story.”