A Saint of True Devotion 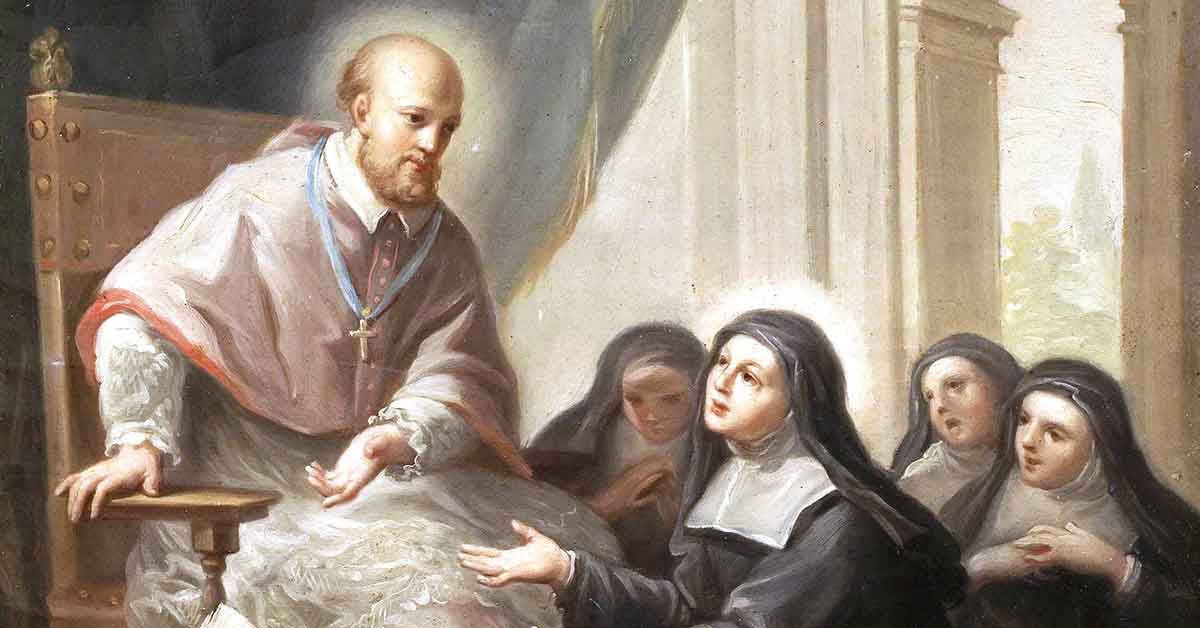 St Francis de Sales with nuns of the Visitation, in a painting by Francisco Bayeu y Subías (1734–95)

In the grand heights of heaven the light of Christ is aflame. Through the mercy of God, it pours forth to the earth. It is undeterred by the darkness of ages.

Some 500 years ago there was an ever-burning lantern of this light held firmly by St Francis de Sales. His preaching  gave an antidote to heresy, a fire to tepid souls, and an invitation to board the pilgrim’s vessel that is the Church. He desired so ardently that many be saved that he spared no hour nor minute to bring others to accept the redemptive grace of Christ’s Passion.

One dares to imagine that in the dizzying streets of Paris and the hostile towns of south-eastern France, the Immaculate Heart of Mary would whisper to Francis’ despairing heart. Through her fervent intercession and through God’s Holy Spirit, he would become a saint and a Doctor of the Church.

St Francis de Sales, the eldest of six brothers, was born in the Duchy of Savoy on August 21, 1567, to aristocratic parents. Like most saints, he sailed the many turbulent waves that one experiences when living a life of faith. It is said that after being haunted by a cloud of despair, he was converted as he knelt before the miraculous image of Our Lady at St Etienne-des-Grès, the “Black Madonna of Paris”. The numerous intercessions of the Blessed Mother were not in vain but bore much fruit in the life of the saint who would go on to become the bishop of Geneva.

In the years leading up to his episcopate, he demonstrated great zeal and courage. By this time in the late 16th century, the bubbling cauldron of the Reformation was spilling over. Francis laboured in this toilsome field by preaching and hearing confessions. And, remarkably, amid the busyness of episcopal life, he founded a religious order with St Jane Frances de Chantal, the Institute of the Visitation of the Blessed Virgin, for young girls and widows.

He died in December 1622 in Lyon, France. On his deathbed, he was heard saying: “God’s will be done, Jesus my God and my all!”

Doctor of the Church

He was canonised by Pope Alexander VII in 1665 and was proclaimed a Doctor of the Universal Church by Pope Pius IX in 1877. The latter spoke highly of St Francis de Sales when he said in his apostolic letter Dives in Misericordia Deus:

“Rich in mercy, God never lacked his Church which militates in this world, but according to the various vicissitudes of things and times he wisely administers the appropriate aid. While in the 16th century he visited with the rod of his fury the Christian peoples, and allowed many provinces of Europe to be shrouded in the darkness of heresies that widely expanded, not wanting to reject his people by themselves, he providentially aroused the new lights of holy men, so that, illustrated by the splendour of these, the children of the Church would be confirmed in the truth, and the same abusers were to be gently reduced to the love of her. Francis de Sales, bishop of Geneva, exemplary in holiness and a teacher of true and pious doctrine, was among such very clear men: he not only with his voice but also with immortal writings pierced the monsters of the rising errors, consolidated the faith, demolished the vices, amended the customs, and showed everyone the way that leads to heaven.”

How often St Francis de Sales must have dwelt in the midst of Jesus present in the Blessed Sacrament! I imagine that in the quiet moments of Eucharistic adoration, he saw the glow and glimmer of grace. And for our benefit and to the glory of God, that glow is shared with us, 500 years later. In his book Introduction to the Devout Life, St Francis de Sales wrote:

“Even as a man just recovering from illness, walks only so far as he is obliged to go, with a slow and weary step, so the converted sinner journeys along as far as God commands him but slowly and wearily, until he attains a true spirit of devotion, and then, like a sound man, he not only gets along, but he runs and leaps in the way of God’s Commands, and hastens gladly along the paths of heavenly counsels and inspirations.”