CDF Plenary: Doctrine must be safeguarded by discernment, faith 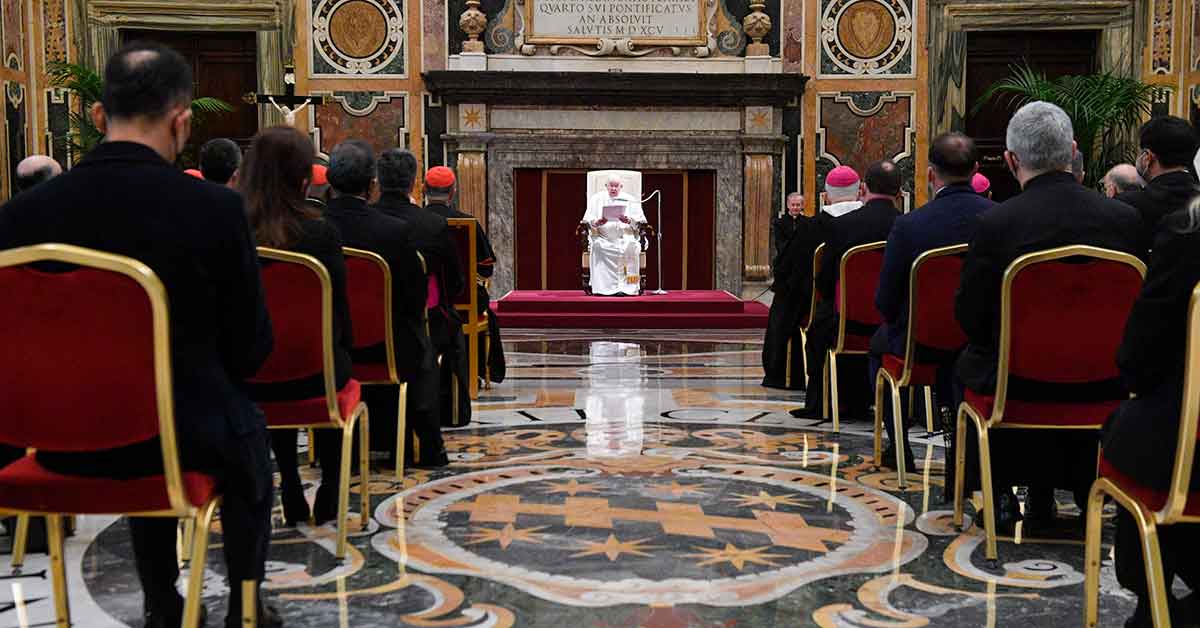 Pope Francis addressed members of the Congregation for the Doctrine of the Faith during an audience at the Vatican Jan. 21, 2022. (CNS photo/Vatican Media)

By Junno Arocho Esteves – Discernment is a key attribute in protecting doctrinal integrity, in safeguarding the innocent and in guiding the church’s synodal path, Pope Francis told members of and advisers to the Congregation for the Doctrine of the Faith.

Discernment also is needed to fight against “abuses of every kind,” the pope said Jan. 21 during an audience with the cardinals, bishops, priests and laypeople who were taking part in the doctrinal congregation’s plenary assembly.

“The church, with God’s help, is resolutely pursuing the commitment to render justice to the victims of abuse perpetrated by its members, applying its canonical legislation with particular care and rigour,” he said.

“Judicial action alone cannot suffice to stem the phenomenon,” the pope said, “but it is a necessary step toward reestablishing justice, repairing the scandal and reforming the offender.”

Thanking the members for their service “in promoting and protecting the integrity of Catholic doctrine on faith and morals,” the pope said the congregation’s work also must be guided by the recognition of “the dignity of every human person.”

“In our time, marked by so many social, political and even health-related tensions, there is a growing temptation to consider the other person as a stranger or an enemy, denying him or her real dignity,” he said.

In protecting human dignity, the doctrinal congregation can help create the “necessary condition for fraternity and social friendship to be realized among all the peoples of the earth.”

Christians need to learn the art of discernment to deal with “new and complex questions” and offers of forms of spirituality that “do not always find their point of reference in the Gospel.”

Thus, he explained, “it often happens that we have to deal with alleged supernatural phenomena, for which the people of God must receive sure and solid indications.”

Discernment is also needed in the congregation’s work of granting papal dissolutions to non-sacramental marriages.

Such cases, he said, are “not only a matter of canonically putting an end to a marriage that has already failed, but in reality,” is an “eminently pastoral act” that must nurture faith.

Departing from his prepared remarks, the pope said discernment will be especially important during preparations for the celebration of the upcoming Synod of Bishops on synodality, especially when listening to “opinions, points of view and reflections.”

“This discernment is what will make the synod a true synod for which the main protagonist — the most important one – is the Holy Spirit, and not a parliament with the exchange of opinions made by the media,” he said. “That is why I must emphasise: discernment on the synodal path is important.”

Lastly, Pope Francis highlighted the importance of faith because without it, “the presence of believers in the world would be reduced to that of a humanitarian agency.”

True faith, he said, must be at the heart of every baptised Christian’s life and action, and not “a generic or vague faith, like watered-down wine that loses its value.”

“Let us not settle for a lukewarm and habitual faith,” the pope said. “Let us cooperate with the Holy Spirit and with one another so that the fire that Jesus came to bring into the world may continue to burn within everyone’s hearts.”

Tags: Congregation for the Doctrine of the FaithPlenary