Do You Love Me?: Third Sunday of Easter 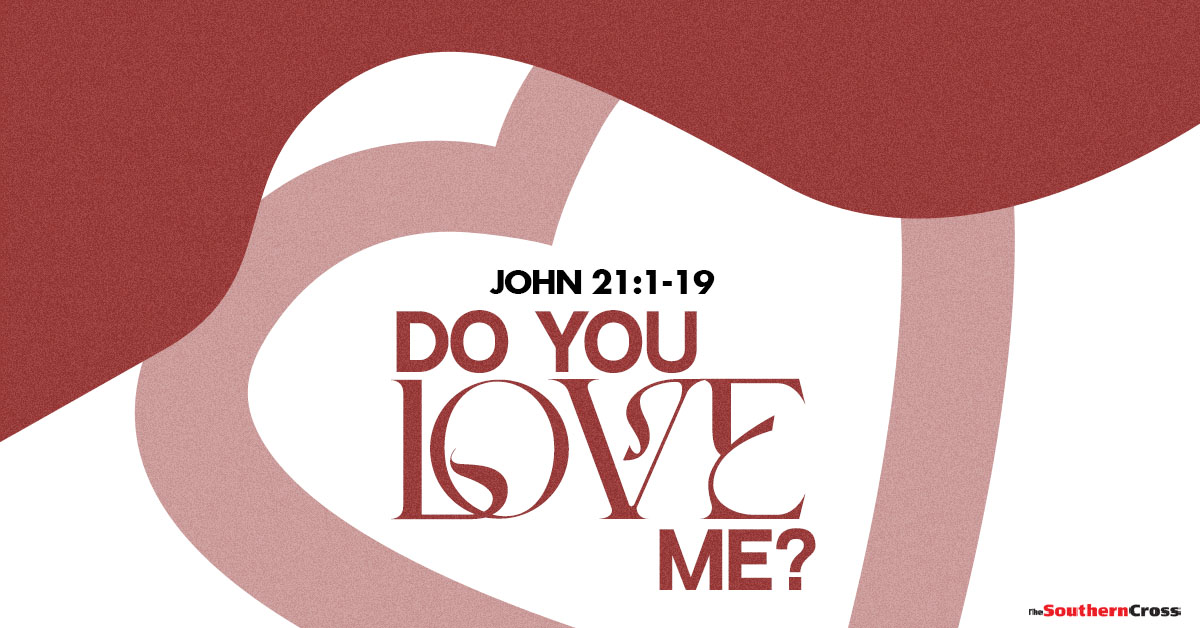 Theme: Do you love me? The Investiture! Let us eat with the Lord!

Point of Reflection: The Scriptural readings of the third Sunday of Easter continue to explore the effects of Jesus’ resurrection on the disciples. These effects could be summed up with the word “investiture”, as the disciples are accorded a special dignity, rank, or power because of their connection to the conqueror of death, the Risen Lord. Today as followers of Christ we are the investitures, receiving the blessings of the risen Lord.

Sermon (Reflection): In today’s Gospel reading, John presents the story of Jesus’ post-resurrection appearance to his disciples in Galilee in two distinct parts. As in the Gospel of Luke, Jesus first confirms that he has truly been raised from the dead by sharing a meal with the disciples. Then, Jesus reinstates Peter to a leadership role. He does this by investing Peter with the dignity of the shepherd of the flock. Today too as Christians, we are being invested with dignity to follow Jesus Christ

On returning to Galilee, the disciples had returned to their former life and went fishing. In a story very similar to the call of the first disciples in Luke (cf. Luke 5:1-11), Jesus met them returning from the night catch with empty nets. He commanded them to put out the nets again, with miraculous results. This led the disciple to recognize Jesus and share a morning meal with their Risen Lord. Their belief in the resurrection was confirmed by this encounter, and their call to discipleship was thus renewed. Today, as Christians, we need to re-encounter the risen Jesus in our daily family like and in our hearts. We need to eat with the Lord in our actions and deeds. Our faith is useless if we don’t encounter the risen Lord in our Christian living.

Why Jesus Christ asked Peter several times if he loves him? Remember, he denied Jesus three times and is being asked three times again after resurrection. Thus, the second part of the story which focuses on Peter. Peter, the chief disciple, was also the greatest failure. Publicly denying Jesus during his trial, he manifested a lack of love and commitment to his Lord. Meeting Peter on the lakeshore Jesus gave him a chance to redeem himself and renew his discipleship. Peter had denied Jesus three times standing by the fire. Now, also by the fire, Jesus asked Peter whether he loves him more than other disciples.

Three times Peter confirmed his love and commitment to Jesus. After each of Peter’s answers, Jesus commanded him to “feed”, “tend to”, and “feed” his sheep. Thus, Peter was entrusted with the role of the shepherd. In the Gospel of John, Jesus was explicitly named the “good shepherd (John 10:11). Now, having renewed his commitment to Jesus, Peter would assume Jesus’ role as the shepherd for the emerging community of believers.

Even ourselves in our Christian life, we have denied Jesus with our actions and words, but what is most important is to redeem ourselves by accepting and living with the risen Lord; the Lord has truly risen, Alleluia, we need to be Easter people by saying, I LOVE YOU JESUS.

The dialogue concluded with Jesus stating that Peter will be bound and taken where he does not want to go. John confirmed that this statement hinted at Peter’s death as a martyr. Jesus’ final statement to Peter, “follow me”, was, therefore, a call for the apostle to follow his master as a good shepherd who will ultimately lay down his life for his sheep. Thus, this is the story of Peters’ investiture with the dignity of the shepherd entrusted with tending Jesus’ flock. A mission which Peter will faithfully fulfil. AS Christians; are we fulfilling our mission mandate we received during baptism?

Today’s liturgy of the word is inviting all of us to recognize the Lord and eat with the Lord as He has truly risen, death has been defeated, the tomb is empty, we are no longer orphans, the Lord is with us and he has given us hope for resurrection. Let us exclaim with the Psalmist, “I will extol you, O Lord, for you have drawn me up”.

The second Scriptural reading (Cf.Revelation 5:11–14) contains a vision of the divine investiture of the Lamb. In the verses leading up to it, John describes God seated on his heavenly throne and holding a sealed scroll containing His decree and plan for the destruction of evil and the salvation of his people. Initially, no one is found worthy to approach God and open the scroll. Then, the Lamb “who conquered” appeared, took the scroll from God’s hand, and would subsequently break open its seals, initiating the execution of God’s plan. The Lamb represents Jesus who sacrificed himself to bring redemption to God’s people. His self-sacrifice led to his investiture with the divine prerogatives: power, wealth, wisdom, might, honour, glory, and blessing. These are the seven characteristics that rightfully belong to God alone and the risen Lord is giving them to us.

Christian Act in Word of God “Being with the risen Lord!”

The Scriptural readings of today give us a reminder for us to be Christians of the great dignity and the important tasks we have been given as God’s children and servants. First, we must express our deepest gratitude to God for callings us to be his children and servants, by bearing witness to him wherever we are. In our traditional African communities, people were invested with kingship or chieftaincy titles. Our chiefs or kings were the custodians of the culture and traditions of the community. This was a heavy responsibility placed on their shoulders, but with it came dignity, power, and authority to serve the community. By the virtue of our baptism, we are all kings and in the gospel we have seen Peter being invested as the leader.

As expressed in our first reading from the book of Acts(Cf. Acts 4:1-22), the apostles were not afraid of proclaiming Jesus as Lord and Saviour of the world. It was a dangerous mission that could lead them to death. However, they considered suffering for the sake of the Gospel a blessing. This is because Jesus whom they were following had suffered. Hence, in their trials, they fulfilled their ambition of being true apostles just like Jesus.

Today, we also are invested with certain responsibilities in our places of work or at school, to serve the interests of the community or institution, wherever we are. These places and situations are our missionary field, where our dignity shines for all to see when we carry out our work no matter what difficulties and challenges arise.

The author of the book of Revelation encourages us never to give up hope and shows us the example of Jesus. Jesus endured the suffering and the pain of the cross, but this eventually led him to God’s side in heaven. He became the lamb who conquered, and who was made worthy to take the scroll from God and break its seals. In doing so, he allowed God’s will to be revealed to the world. Each one of us can do just that, although on a much smaller scale. When we were brought into the Christian community we were invested with divine knowledge and power. We became like Jesus, the Lamb of God, because, like him, we know God, God’s will, and have God’s Spirit working in us. Invested with such privileges we are truly powerful in what we can do and achieve in God’s name.

Last, let us reflect on the question of Jesus to Peter, do you love me? It is our living question, do I love the Lord? This can only be manifested in our actions, deeds and words. As Christians, our words and actions must be of true followers of Christ who show love and care to the people we encounter each and every day. Let us eat with the Lord, He has truly risen, Alleluia!

Action: I will love the Lord with all my heart

Prayer: Almighty and Ever-loving God, we thank you for making us your children despite our unworthiness. Grant us the Spirit to eat with risen Lord as we continue to love the Lord with our deeds and words. We make this prayer through Christ our risen lord, Amen.