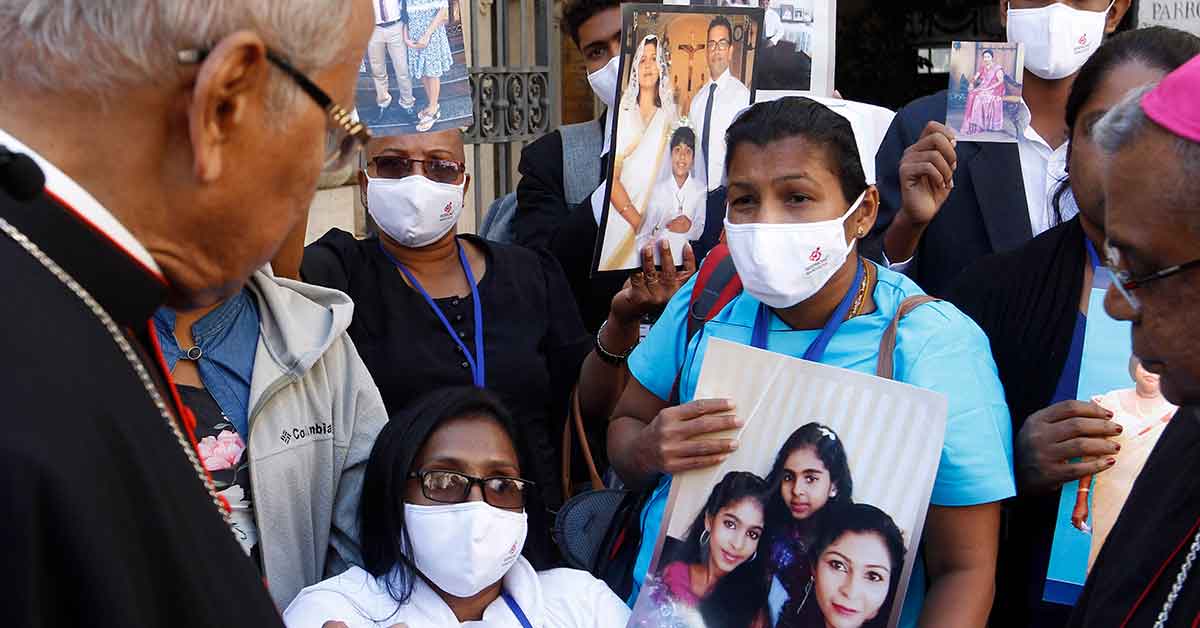 Cardinal Malcolm Ranjith of Colombo, Sri Lanka, and survivors and family members of victims of the 2019 Easter bombings in Sri Lanka gather outside St. Peter’s Basilica at the Vatican April 25, 2022. After a Mass celebrated by Cardinal Ranjith to commemorate the anniversary of the attacks, Pope Francis appealed to Sri Lankan authorities to find the truth concerning the bombings. (CNS photo/Carol Glatz)

By Carol Glatz – Three years after multiple bombings killed more than 260 people on Easter and lingering questions remain about those behind the attacks, Pope Francis appealed to Sri Lankan authorities to shed light on what happened.

“Let us pray today for all victims of violence and war, especially terrorism,” he said after greeting about 3,500 Sri Lankans who gathered for Mass in St. Peter’s Basilica, commemorating the 2019 Easter attack.

A coordinated series of suicide bomb attacks April 21, 2019, targeted three hotels, two Catholic churches and one Protestant church as people celebrated Easter services. Officials said 269 people were killed and at least another 500 people were injured. The majority of the dead were Sri Lankans, with at least 45 foreigners among those killed.

Cardinal Malcolm Ranjith of Colombo, Sri Lanka, concelebrated the Mass with about 10 bishops from Sri Lanka. A statue of Jesus, spattered with the blood of parishioners at one of the attacks, was placed near the altar.

In attendance were survivors and family members of victims of the bombings, representatives of the Muslim, Hindu and Buddhist communities, and thousands of Sri Lankans who live in Rome and other parts of Italy.

After Mass, Pope Francis entered the basilica, greeting and blessing visitors – who held colour photographs of their loved ones killed in the blast – and survivors, many of them in wheelchairs or blind from shrapnel.

Gathering everyone together with the pope was part of just a number of high-profile efforts to “tell the world, ‘Give us justice,’ because we don’t know who did this or why,” Cardinal Ranjith told reporters, including Catholic News Service, outside the basilica after the Mass.

“We want a transparent investigation” and the assistance of the international community in the quest for answers, he said, citing allegations the terrorists had the support of former government leaders and authorities.

The cardinal was surrounded by more than a dozen survivors, including a young girl wearing dark sunglasses, and a former dance instructor in a wheelchair, both blinded by shrapnel.

The two Catholic churches that were targeted – St Anthony’s Shrine in Kochchikade and St. Sebastian’s Church in the suburb of Negombo — were in the cardinal’s archdiocese. The latter affected more than 219 people, 113 of whom died.

Prasanna Fernando showed reporters the scars and indentations left on his head as a result of the shrapnel and surgery from the blast at St. Sebastian’s. His right arm was paralyzed from multiple heart attacks, and his wife spoke for him through an interpreter.

They said “they can’t imagine that this happened inside a church, but they have not lost their faith, and this incident brought them closer to God,” said the interpreter, a medical doctor who travelled with the survivors.

When asked what it felt like being with the pope, tears came to the couple’s eyes, and the woman wept, saying it was, “as if they have been with Christ and they have seen Jesus.”

Hasaru Jayakody, 19, survived his shrapnel injuries, but his 49-year-old mother did not.

He told CNS he went to Sri Lanka from Bahrain at the end of 2018 to study electrical engineering.

He said the blast was so strong it made him feel numb. It was only when he looked at his shirt and saw “blood was spewing out that I started to panic, and my immediate instinct was to survive, so I left the church leaving my mom behind.”

Despite three years having passed, it all “feels the same,” he said. “You can’t move on. Something feels incomplete because why did they die? Why did all of this happen?”

“We want our stories to spread around the world so our country can be safe,” he said, holding a photograph of his mother, Priyanthi Mangalika.

Sri Lankan government officials blamed the attacks on a local militant group allegedly affiliated with Islamic State militants. A trial of two dozen people accused of plotting the attacks is ongoing, as part of a promised probe into the tragedy.

Critics, however, have faulted the current presidential administration for not filing charges against former President Maithripala Sirisena, who was accused of not acting on intelligence reports warning of the planned bombings weeks before they happened. Critics also blame police and intelligence units for failing to prevent the bombings, despite advanced warnings.

Protests seeking justice for victims and seeking relief from the current devastating economic crisis in the country have been intensifying.

The Catholic Church has been one of the strongest critics, and Cardinal Ranjith addressed the U.N. Human Rights Council in March, flagging the nation’s flawed investigation.