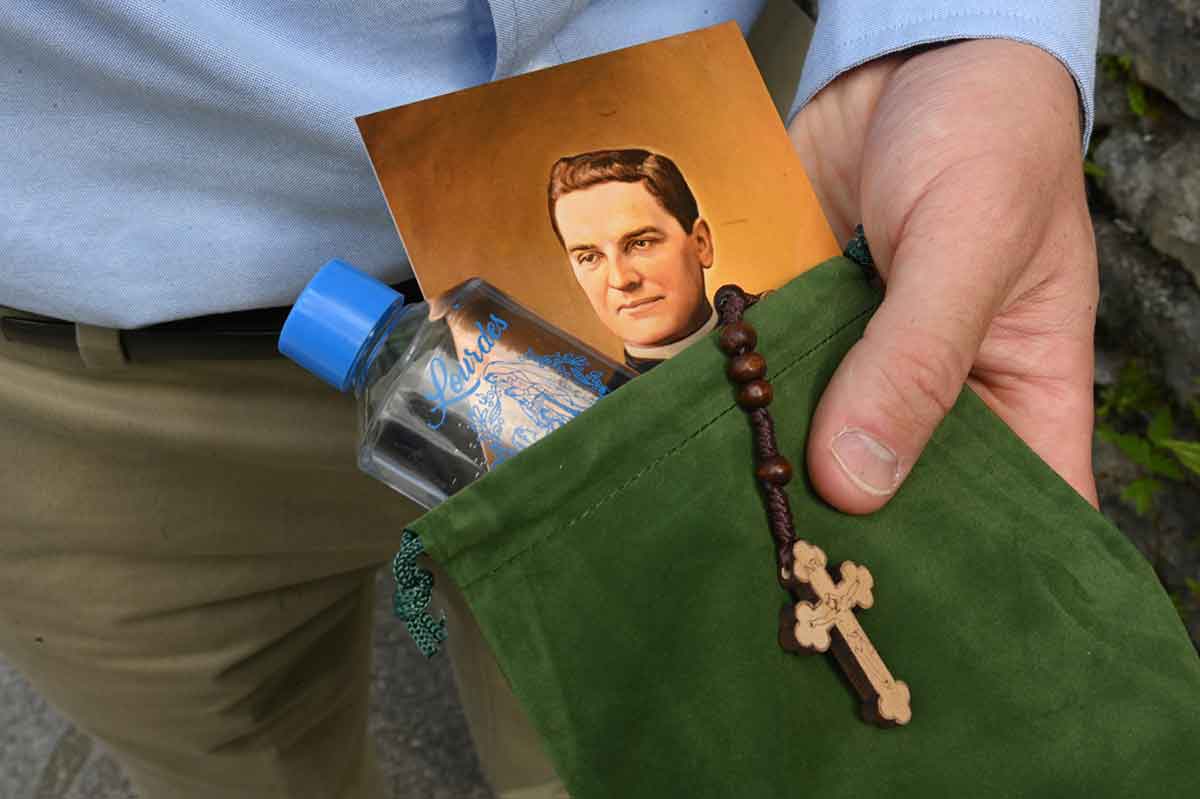 A vial of holy water from Lourdes, France, and a Blessed Michael McGivney prayer card from a prayer kit are seen May 13, 2022. Participants in a May 10-16 pilgrimage to Lourdes for U.S. active-duty military personnel and veterans assembled 3,000 prayer kits for Ukrainian soldiers. The kits, which also include an Our Lady of Lourdes prayer card, will be shipped to Ukrainian soldiers fighting on the front lines in their besieged nation. (CNS photo/Tamino Petelinsek, Knights of Columbus)

By CNS –  Participants in an annual pilgrimage to Lourdes, France, for U.S. active-duty military personnel and veterans assembled 3,000 prayer kits for Ukrainian soldiers.

The “Warriors to Lourdes” pilgrimage May 10-16 drew more than 175 participants and was co-sponsored by the U.S. Archdiocese for the Military Services and the Knights of Columbus.

U.S. military personnel visited the Shrine of Our Lady of Lourdes, which is where Mary appeared to St. Bernadette Soubirous in 1858. They attended daily Mass and had various opportunities for prayer, formation and fellowship.

The prayer kits blessed by Archbishop Timothy P. Broglio, who heads the U.S. military archdiocese, and were then shipped to Ukraine for distribution to active-duty and injured Ukrainian soldiers.

Each kit included a rosary, an Our Lady of Lourdes prayer card, a vial of Lourdes holy water and a Blessed Michael McGivney prayer card.

Father McGivney, who was beatified Oct. 31, 2020, was a parish priest in New Haven when he founded the Knights of Columbus in 1882 to serve the needs of a largely immigrant Catholic community.

“What began as a small fraternal benefit society has since grown into one of the world’s leading international charitable organisations, with 2 million members in more than 16,000 local councils,” said a news release about the pilgrimage.

The Knights also sponsored a Ukrainian delegation to be part of the Lourdes pilgrimage through the organisation’s United in Charity initiative, offering them an opportunity for prayer and healing during this time of war in their nation.

The healing waters of Lourdes draw people from around the world. 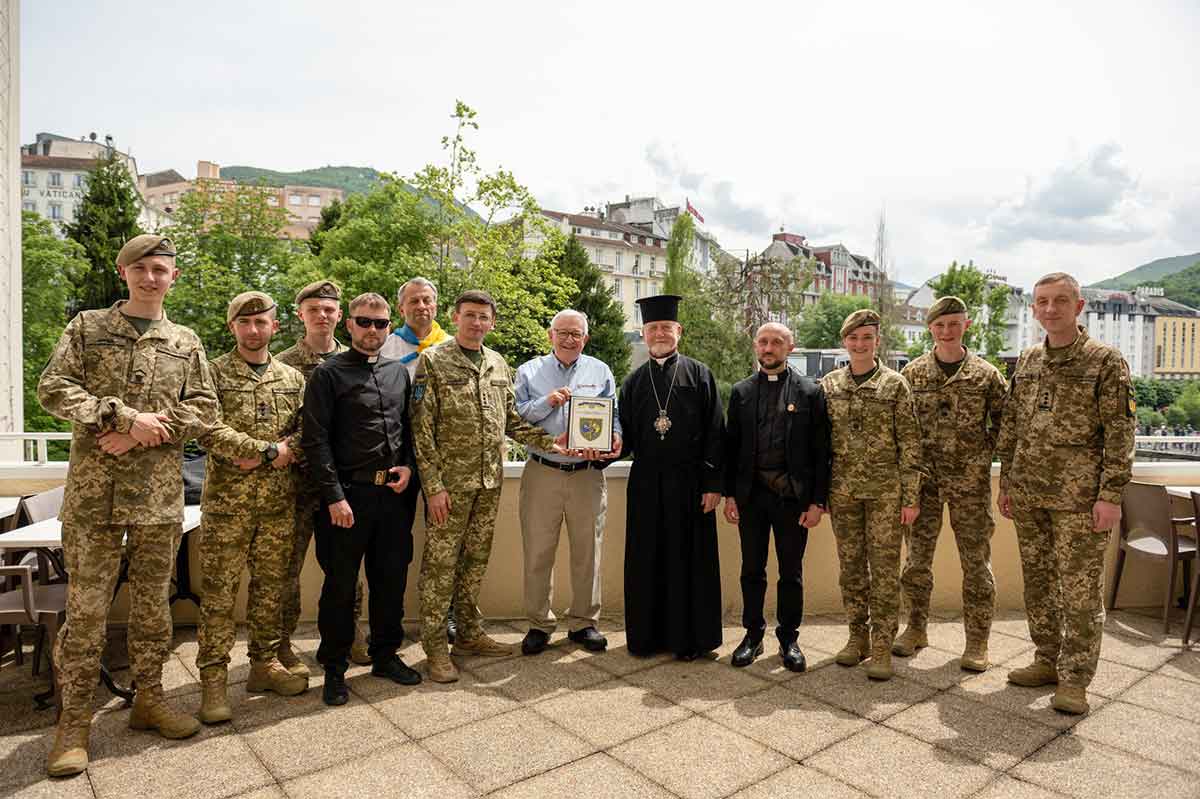 Deputy Supreme Knight Paul O’Sullivan receives a plaque from a Ukrainian military delegation May 14, 2022, in Lourdes, France. The plaque is a sign of appreciation for the Knights of Columbus support of Ukrainian refugees and displaced people since the start of Russia’s invasion. (CNS photo/Tamino Petelinsek, Knights of Columbus)

The “Warriors to Lourdes” pilgrimage allows the Knights as a fraternal organisation “to demonstrate its patriotic values through sponsorship of wounded, ill and injured active-duty military and veterans,” said retired Marine Col. Charles H. Gallina, principal coordinator of the pilgrimage.

“Wounded warriors also include those suffering from PTSD. We pray this pilgrimage will bring spiritual support to our wounded heroes on their journeys toward healing and recovery,” he said in a statement.

“During this time of devastating war in Ukraine, the Knights of Columbus have been working to bring peace and comfort to Ukrainian families and military personnel,” said Supreme Knight Patrick Kelly. “We’re honoured to have Ukrainian soldiers join us again in Lourdes.”

“Together, especially through devotional prayers to Our Lady of Lourdes,” he added, “we want to bring greater healing, unity and hope to all those affected by this tragedy.”