Irish Archbishop: Church can be Renewed if People Listen to Holy Spirit 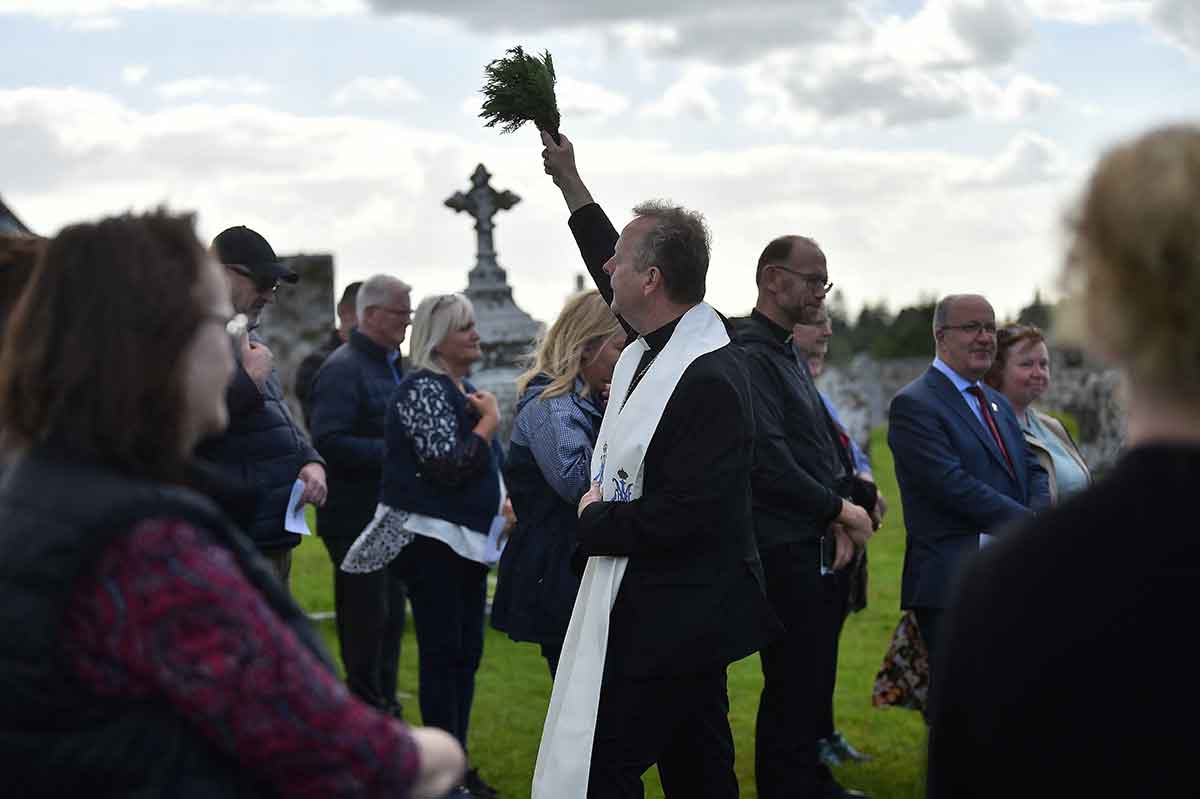 Archbishop Eamon Martin of Armagh, Northern Ireland, blesses delegates during a prayer walk at a pre-synodal assembly in the sixth-century monastic site of Clonmacnoise in Ireland June 18, 2022. It was in preparation for the universal synod convened by Pope Francis for 2021-2023. (CNS photo/Clodagh Kilcoyne, Reuters)

By Sarah Mac Donald – A chapter in the life of the Irish church is coming to an end, and the primate of All Ireland said believes that “if we are open to listening to what the Holy Spirit is saying,” something new will begin, though it will be much smaller.

Speaking to Catholic News Service at the ruins of the ancient sixth-century monastic site of Clonmacnoise, founded by St Ciarán on the banks of the River Shannon in County Offaly, Archbishop Eamon Martin said he felt the 200 years from Catholic Emancipation in 1829 to 2029 “serve as a moment, a chapter in the life of the church in Ireland, just as Clonmacnoise tells the story of a particular moment. Clonmacnoise was clearly once a really vibrant ecclesiastical centre at the crossroads of Ireland in its day, and yet that was a chapter that came to an end. I feel we are at a similar moment in the life of the Irish church now.”

“The question is – what next? We are still not entirely certain, but we are open to what the Holy Spirit might be saying and to a quiet and gentle renewal of the faith. We are moving from maintenance to mission. In order to make space for something new, we have to accept that there is no point in trying to maintain a particular form of the life of the church which was for a different time.”

Irish census figures for 2022 are likely to show another drop in the number of people who identify as Catholic in Ireland. In 2016, the figure was 78.3% of the population, (approximately 3.7 million people) down from 84.2% in the 2011 census.

Last year, Archbishop Dermot Farrell of Dublin told the journal Síolta, which is published by the national seminary in Maynooth: “The challenges facing me are pretty clear. We have an ageing clergy and very few vocations to the diocesan priesthood or religious life. There is a major decline in the number of people who actively practice and live their faith.” He stressed that clerical sexual abuse had irreparably damaged the church’s reputation in Ireland.

Archbishop Farrell warned that this could spell the end for Catholicism in Ireland if major changes were not implemented within the church, because evidence of Christian belief in Ireland today “has, for all intents and purposes, vanished” and this “underlying crisis of faith was particularly acute among the younger generations.” He added, “The current model of the church is unsustainable.” 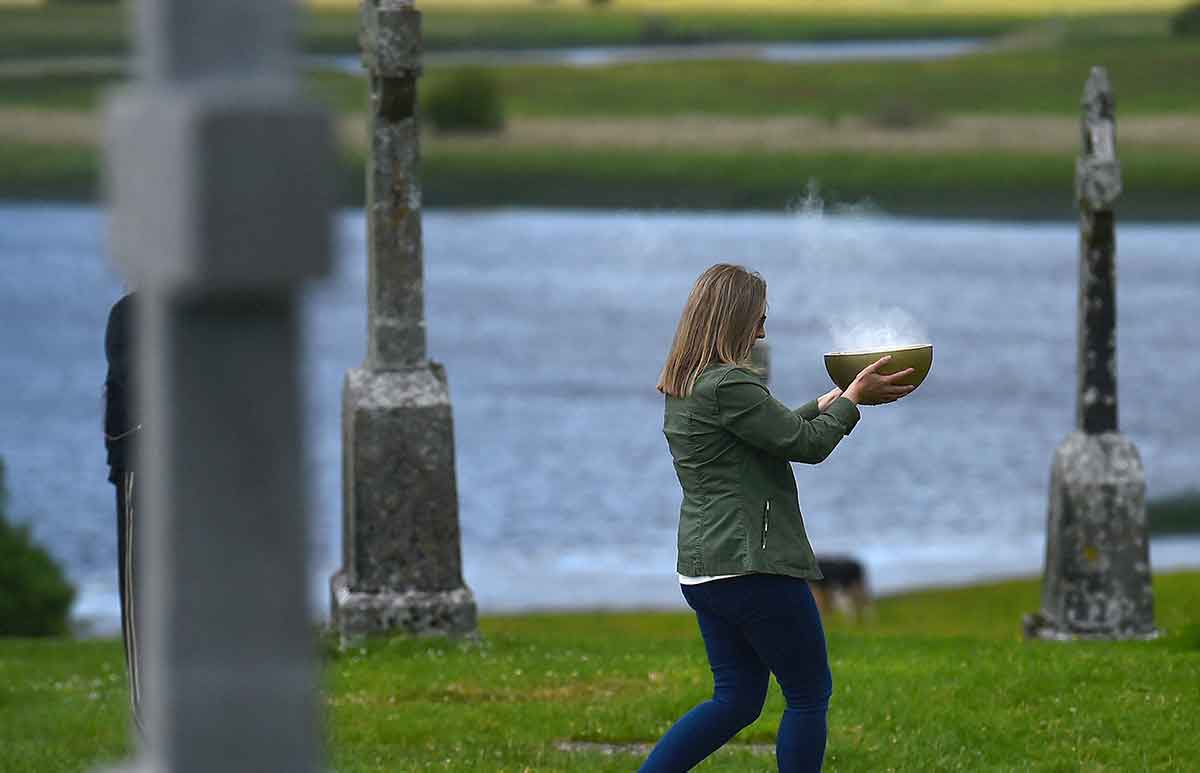 A delegate carries a bowl of incense during a prayer walk at a pre-synodal assembly in the sixth-century monastic site of Clonmacnoise in Ireland June 18, 2022. It was in preparation for the universal synod convened by Pope Francis for 2021-2023. (CNS photo/Clodagh Kilcoyne, Reuters)

Archbishop Martin told CNS June 18: “One of the things that is coming across is the (pre-)synodal conversations is an awful lot of people are very passionate about their faith in Jesus Christ, very much in love with Christ, with the church. But they want the church to be open to something different.”

Archbishop Martin spoke after a liturgy that concluded a daylong National Pre-Synodal Assembly, in which 160 delegates representing the 26 dioceses in Ireland, religious congregations and Catholic groups met to reflect on the findings of the 40 submissions that emerged from the local diocesan listening phase in preparation for the 2023 Synod of Bishops on synodality.

The reflections gathered in the assembly will help shape the content of Ireland’s national synthesis, to be submitted to the Vatican by Aug. 15.

The synthesis will be overseen by the Synodal Pathway Steering Committee, and the chair of the committee, Nicola Brady, pledged to publish the final report as a gesture of transparency and trust.

The report also will be used as a resource to continue the synodal dialogue in preparation for the Irish church’s national assembly in 2026, which aims to bring about renewal to a church grappling with the fallout of clerical abuse scandals, declining morale, a lack of vocations and falling Mass attendances.

Organizers of the National Pre-Synodal Assembly said there was a commonality in the 15 themes that emerged.

The themes included a call for much greater roles for women at all levels of church; expressions of how abuse is part of the story of the church; LGBTQI+ concerns; faith formation and adult catechesis; youth, family, co-responsible leadership; lay ministry; liturgy and the impact of COVID-19.