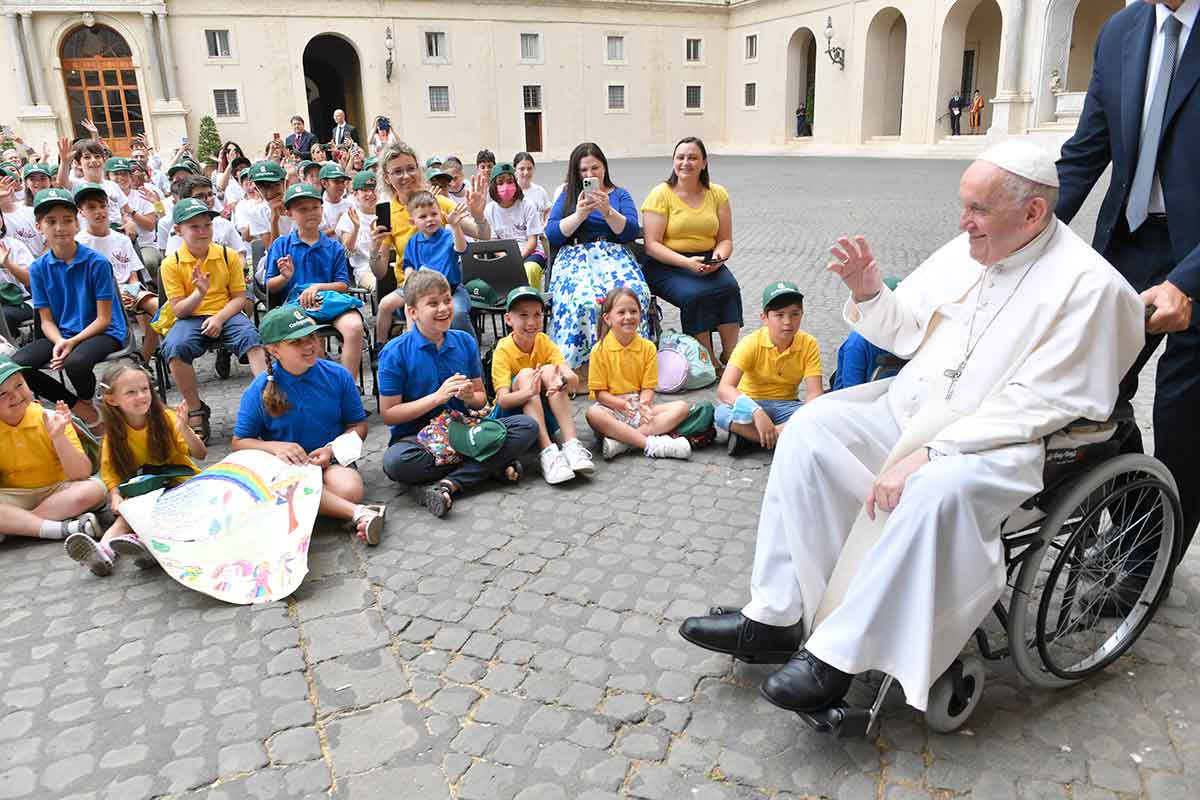 Pope Francis leads an audience with some 160 children in the San Damaso Courtyard at the Vatican on June 4, 2022. Most were visually impaired youngsters and their siblings, but they also included a group of children from Ukraine. At the audience the pope said he’s still considering travelling to Ukraine but wants to make sure such a trip would not make anything worse. (CNS photo/Vatican Media)

By Cindy Wooden – Sitting in a wheelchair in the courtyard of the Apostolic Palace, Pope Francis allowed himself to be grilled by a group of youngsters, including one who asked when he would go to Ukraine “to save all the children who are suffering there.”

“I want to go to Ukraine, but I must wait for the moment, you know,” Pope Francis responded to Sachar, a boy from Ukraine now living in Rome.

“I have to look for the right time to do it,” the pope said on June 4, explaining that he would not want to do something “that could do more harm to the whole world than good.”

The pope added that within the next week, he would be meeting with representatives of the Ukrainian government “who are coming to talk about a possible visit of mine there. Let’s see what happens.”

Pope Francis had told reporters on April 2 that he was considering a possible visit to the Ukrainian capital. But in late April, he started talking more negatively about the idea. He told the Argentine newspaper La Nación on April 21 that “I cannot do anything that puts higher objectives at risk, which are the end of the war, a truce or, at least, a humanitarian corridor.”

“What good would it do for the pope to go to Kyiv if the war were to continue the next day?” he said.

Sachar and other Ukrainian youngsters whose families are assisted by the Ukrainian Basilica of Santa Sofia in Rome joined children assisted by a Rome institute helping the visually impaired for the meeting with Pope Francis as part of the ongoing “Children’s Train” project of the Pontifical Council for Culture.

Nicole asked the pope what kind of responsibility he feels “being pope or at least the most important person in the world.”

Pope Francis let her assumption slide, but said everyone has responsibilities, some of which change over time. Youngsters have a responsibility to study and to contribute to their families.

As for being pope, he said, “it’s true that it is a bit heavy sometimes, because it’s scary. But I try to experience it in the most natural way, because if the Lord asked this of me, it is because he will give me the strength not to make a mistake, to be careful not to make mistakes.”

Caterina asked if it is tiring being the pope, to which he responded, sometimes, “but if you ask me if it’s more tiring than the work of a dad or mom? No. No.”