The House in Tyne Street 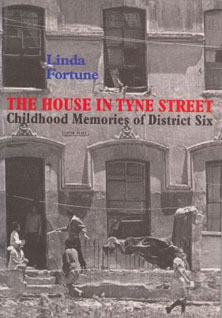 In 1966, PW Botha, self-proclaimed friend of the Coloured community and then Minister of Coloured Affairs, declared multi-racial District Six a white group area. With their army of group areas inspectors and their bulldozers, the apartheid powers slowly dismantled the tight-knit Cape Town community, as they had done with Sophiatown a decade previously.

The story of District Six and the character of its people is well-documented. The musical District Six helped to popularise that story. The late author Richard Rive described a less glorified yet always community-driven slum in his outstanding novel Buckingham Palace, District Six. Many oral history-based books have documented the last years of District Six in particular. Linda Fortune’s first book is in the latter vein: a sketch of the area and its people, spirit and character.

Fortune, a Catholic and presently education officer at the District Six museum in Cape Town’s Buitenkant Street, reminisces in 27 short, digestible chapters about life in District Six and introduces us to various characters she knew there.

There is Aunty, who gave one teacher a taste of her own medicine with a ruler. And Jessie the cat lady, who regularly fed the area’s faithfully waiting alley cats every Friday  and, myth has it, can still be seen doing so today. And the Indian brothers Jeewa, barbers and perfect gentlemen, who lost their entire clientele in one swoop when forced to move to an area designated for Indians. And the German, Mr Leonard, and his Afrikaner wife, who fruitlessly begged to be resettled in a Coloured township. And young Lindiwe and her family, who, apparently without being notified, were suddenly forcible removed to an unknown destination. And Old Sunny Boy, who could have been a professional singer but elected to look after his foster mother instead.

These people, and many others, formed a close community where everybody knew everybody else’s business and people took care of each other.

When the government tore down the district officially because it was a slum it killed that community and exiled its members to impoverished, soon to be gang-infested areas far away from the city. Some of the places to which the evicted people were moved, such as Lavender Hill and Hanover Park  now themselves run down  were named after District Six landmarks, as if to taunt former District Six inhabitants forever.

As Fortune’s family moved out of District Six to Hanover Park, they discussed how they would miss their way of life, window-shopping in town or taking walks in the government gardens. “What about our church? they asked. There was no Catholic church in Hanover Park”

Rather than move into the unknown, many inhabitants of District Six gave up the spirit before they could move, and died. In Tyne Street these include the author’s 51-year-old father. The community was impotent, helpless, when faced with extinction, and sooner or later surrendered to their state-decreed fate.

The author of The House in Tyne Street is, understandably, angry and sad. Writing the book was a catharsis for her, she says. The book exhibits little bitterness, but the pain clearly remains.

Written in a colloquial style, the author keeps the language local but explains slang without intruding on the narrative. And the well-illustrated book does not unduly romanticise District Six.

For the sake of privacy, the principal characters in the book are given false names, including the author. Although well-intentioned, it dilutes some of the book’s intrinsic authenticity. This is unfortunate, because everything told is as probable as it is entertaining.