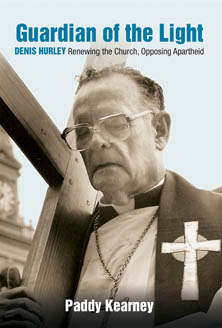 In a lighter passage of Guardian of the Light, Paddy Kearney’s splendid biography of Archbishop Denis Hurley, we encounter the usually reserved archbishop being taught by his nieces to jive to the music of the Beatles. The terminology suggests that this episode was set in the Fab Four’s early period. A mid-period Beatles song title serves well to encapsulate Hurley’s Christian mentality: All You Need Is Love.

Hurley’s life, the biography makes apparent, was animated by love: for the Father, Son and Holy Spirit, the Church (as the Body of Christ and the institution), scripture, liturgy, prayer, family and friends, his country, the poor and suffering, justice. Towards the end of his life, he found the niche in the Church which defined his lifetime’s mission for love: the Community of Sant’Egidio. How gratified Hurley would have been to observe Pope Benedict making the virtue of caritas a hallmark of his pontificate!

The book’s title ties the archbishop’s prophetic role in the Church and in South Africa to his childhood: the son of a lighthouse keeper, young Denis grew up in the shadows of those towering structures that warn and guide seafarers on their perilous voyages.

Enrolled as a boarder in schools run by the Newcastle Dominicans in Natal, young Denis discerned his calling to the priesthood early. A night spent lost in a cave in 1928 cemented the 12-year-old’s determination.

In the 1930s, he studied as an Oblate of Mary Immaculate in Ireland and Rome  Kearney brings together the various strands of ecclesial and social influences on the young Hurley at the time  before being ordained in Rome in 1939.

Having already been identified as leadership material, his ascent in the archdiocese of Durban was rapid. After three years as curate at Emmanuel cathedral, he was appointed superior of St Joseph’s Scholasticate (now St Joseph’s Theological Institute) in 1943, and three years later bishop of Durban. He was only 31  the youngest bishop in the world  and later observed that the appointment came 15 years too early. It deprived him of the opportunity to work in the missions and learn Zulu, which he profoundly regretted.

The appointment was controversial as French missionary Oblates had hoped one of their ranks would get the nod. The Oblate superior, Fr Kerautret (who had been disappointed at not becoming bishop himself) settled the rebellion by telling the missionaries to accept the new bishop or ship out.

The young bishop’s ordination brought together South Africa’s episcopate for the first time in a decade. This gave rise to the idea of establishing a permanent body in 1947, the Southern African Catholic Bishops Conference. With the establishment of the Southern African hierarchy in 1951, Hurley became its first president.

Hurley’s rise in the Church coincided with that of the National Party in South Africa. The apartheid policy would dominate much of Hurley’s long episcopate.

The Church in which he ascended was itself racially segregated, even before the Nats took power in 1948. He later observed that his own understanding of questions of race was not yet fully formed  for more than a decade his views reflected a liberal but rather patronising colonial attitude.

Indeed, the Church in the 1950s fought apartheid with due vigour only when Catholic institutions were under threat, such as the government’s plan to nationalise the Church’s mission schools through the backdoor. The regime’s plan was thwarted by an impressive fundraising campaign, with The Southern Cross playing a central role, which raised today’s equivalent of R137 million.

In a delicious passage, Kearney recounts a meeting between then Bantu education minister Hendrik Verwoerd and a delegation of four Catholic bishops, including Hurley. At one point Verwoerd dismissed the delegation as meddling foreigners. Hurley pointedly reminded the Dutch-born architect of apartheid that all four bishops in the room were born in South Africa.

Such issues united the bishops, but on questions of how to approach their opposition to grand apartheid itself, they were divided, even when in 1957 they passed a resolution calling apartheid intrinsically evil. This divide came to a head in the mid-1960s when the conservative Archbishop William Whelan of Bloemfontein publicly clashed with Hurley over the desirability of the homeland policy, known by the euphemism separate development. Whelan died soon after, and much as his criticism had distressed Hurley, the archbishop of Durban delivered a moving eulogy at his fellow Oblate’s funeral.

Politics started to take a backseat in 1961 when Hurley was appointed to the Central Preparatory Commission (sitting next to the ultra-traditionalist Archbishop Marcel Lefebvre!) for the Second Vatican Council, the event which he would later describe as the greatest experience of my whole life. This is significant: Hurley always was a reluctant political activist. In politics he discerned, after Cardinal Joseph Cardjin’s motto: to see, judge and act. But his true passion resided in matters of the Church, such as evangelisation, renewal and liturgy.

Kearney summarises Hurley’s Vatican II experience in due detail, though evidently conscious that Hurley’s record of the Council, Keeping the Dream Alive (published posthumously in 2005), provides a fuller account.

During Vatican II, Hurley was involved in setting up the International Commission for English in the Liturgy (ICEL), on which he served for more than three decades, including 16 years as chairman. The Vatican’s restructuring of ICEL from a deliberately collegial structure to one controlled by the Vatican, and the dismissal of its work after 2001, would break his heart. Indeed, minutes before his death he lamented what had happened to ICEL.

If Hurley was outspoken before Vatican II, he became even more so afterwards, giving full flight to his episcopal motto, Ubi Spiritus, Ibi Libertas (loosely translated as meaning, Where the Spirit is present, there should be freedom to explore ideas). Fortified by that freedom, Hurley publicly criticised Pope Paul VIs 1968 encyclical Humanae vitae. The biography includes the extraordinary correspondence on the subject between the archbishop and Pope Paul.

It is often said that this critique cost Hurley the cardinal’s red hat. More likely, the red hat became unattainable when Hurley was passed over in favour of Cardinal Owen McCann of Cape Town in 1965. One may speculate that Hurley’s disagreements in the 1950s with successive apostolic delegates over the manner in which the Church should confront the apartheid regime was held against him.

In the early 1970s, the Church was still not integrated, and had only one black prelate, Bishop Peter Butelezi (later archbishop of Bloemfontein). The faithful were divided, much along racial lines, about Hurley’s increasingly prominent political engagement. For most Catholics opposed to apartheid, this engagement was prophetic. His leadership (and education minister Piet Koornhof’s helpful delaying tactics) helped facilitate the opening of Catholic schools to all races in early 1976, the first such integration in apartheid South Africa.

By the time Hurley began his second stint as SACBC president in the early 80s, the bishops conference had become solidly anti-apartheid. The local Church can be proud of the bishops in their solidarity with those victimised by apartheid. In Guardian of the Light, this is perhaps best symbolised by the notion of 28 sombre and mitred bishops in (illegal) procession through the troubled streets of Sebokeng in late 1984.

Before business leaders and Afrikaner intellectuals began meeting with the exiled African National Congress, the SACBC did so in 1983. This was part of a new policy: the bishops now engaged with the liberation movements instead of trying to persuade the intractable National Party government (the passage on the bishops meeting with President PW Botha is worth the price of the book alone). They also reluctantly supported economic sanctions, though on that strategy Hurley was among the doubters.

Hurley’s political activism extended beyond advocacy. He engaged personally with individuals, consulting with leaders, praying with victims, giving material support, rushing to give comfort and solidarity to communities. It is in Kearney’ account of such compassionate encounters that Hurley’s love truly shines.

After retiring as archbishop in 1992, Hurley remained busy: as pastor of Emmanuel cathedral, member of ICEL, chancellor of the University of Natal (where he was a unifying figure in difficult times), in the bishops conference, in ecumenical ventures (especially through the Diakonia Council of Churches, which he co-founded). A few days before his sudden death on February 9, 2004, he had returned from a Sant’Egidio meeting in Italy. On the morning of that day, he had celebrated the 50th birthday of Fatima school in Durban North. He remained active to the last day of his full life.

Paddy Kearney’s account of a remarkable life is meticulously researched, involving many interviews. The author was close to Hurley, and so has a privileged understanding of his subject. In biographies generally, this is an obvious advantage, but it also bears the risk of stunting criticism of the subject. Kearney allows for some disapproving comments  mostly concerning an occasionally autocratic and stubborn streak, and a tendency to avoid personal confrontation  but the reader is left to wonder whether there are matters that have not been fully explored.

This caveat should not detract from what is an outstanding biography. Guardian of the Light assuredly is not a hagiography.

Kearney presents his thorough research with elegance and skillful crispness. Denis Hurley was a shy man, and not easily knowable. This biography boosts our understanding of this great Catholic and South African. It illuminates his motivations, and clears up common misconceptions about the archbishop, a man of progressive thought and a traditional streak.

For Denis Hurley, love trumped questions of faith and doctrine. Love liberated and sanctified him. In a conversation shortly before his death, Hurley cited St Pauls first letter to the Corinthians: that out of love, hope and faith, love is the most important (13:13). Love is the distinguishing mark of the Christian, he said.

Guardian of the Light leaves no doubt that love was a mark that distinguished the life of Denis Eugene Hurley.

Gunther Simmermacher is the editor of The Southern Cross.