Patriarchy is not the source of all evil

The question is almost daily on our lips: What has happened to modern man? Why has he become so violent, so brutal in his treatment of other men, let alone his callous violation of woman, the very one in whose hands he drew his first breath and from whom he sucked his first nourishment? 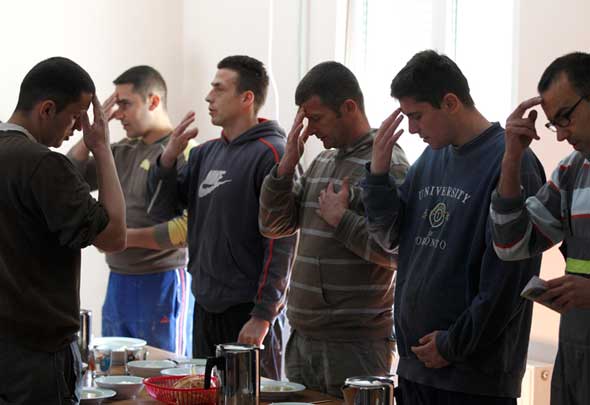 Men at prayer. In the first of his monthly column, Cardinal Napier argues that men should not be blamed for all the ills in the world. (Photo:Paul Haring, CNS)

Its a question that cannot be answered without reference to today’s in philosophy of life political correctness.

I can hear the protests already: What? Political correctness? What has PC got to do with male violence, brutality and callousness? My answer is brief and pointed: Everything!

And this is how I justify my answer.

Of course, this is not the fault of every single man, but of manhood as such, because they and they alone invented patriarchy and have forced it on woman from day one! Its no wonder that modern man is but a pale shadow of the magnificent creature, who after his creation by God together with woman was approved of and admired in the words: …and God saw all that he had created and indeed it was very good.

In Gods plan, it was together with woman that man was given his purpose for being. And a big part of that reason for being was for him to have a partner who would complement and complete him in his very being as man, just as he would complement and complete her in her being as a woman. Be fruitful, multiply and fill the earth and have dominion over it.

It was in this partnership of being one flesh joined together by God that man was to manifest the image and likeness of God in him and in the woman. Together they were to participate in every aspect of life. In particular, they were destined to enjoy Gods regular company: In the cool of the day, God came into the garden to be with the man and the woman. When he did not find them he called out: Where are you?

It was the answer to this question by God, that revealed to us the deeper reason for the continual conflict between man and woman.

In the Genesis story that conflict begins with the man blaming the woman, and the woman blaming the serpent. That was the beginning of a very long history of man and woman seeking to exonerate themselves of all responsibility by blaming someone or something else. From a faith perspective that was and still is the effect that sin has on every aspect of human life. And as long as we don’t acknowledge that basic fact, we will continue to be blind and unable to discover the answer to what our sinful and selfish nature drives us to do to each other.

When President Jacob Zuma blamed HF Verwoerd for the failure of the Education Department, he was playing out a modern version of the Genesis story. When Julius Malema blames Mr Zuma, he is taking the blame game to another level.

The end result is that we have a whole nation of people who are completely incapable of accepting the first truth, namely that every human being, male and female, is subject to sin, as well as the second, that the only way to freedom from sin is acknowledging and confessing our responsibility for the sins we commit.

In the course of history that blaming has taken on many different forms. In the case of our region of Africa, the dominant forms have been slavery, colonialism, imperialism, racism, apartheid. Today it is taking the form of comrade deployment, cronyism, nepotism, and so on.

But when it comes to male-female relations, the current predominant form of blaming is patriarchy. This nebulous, ill-defined concept is used to paint man as utterly soulless, heartless, all out to dominate, to brutalise and to exploit woman, at every opportunity and in every possible way. It is assumed to be true, and to be man’s evil design to make life as easy and carefree for himself as possible. All responsibility has been shifted over to woman, while he enjoys the life of Riley! Something has to be done to restore the order of things. So patriarchy has to be eradicated once and for all. A woman must be equal to man in everything and in every way possible! That’s the bottom line!

But is that the truth?

The truth revealed by God is that although man and woman were created in his image and likeness, that image and likeness was tarnished and even destroyed by their original sin of disobedience, which they committed by eating of the forbidden fruit.

That act of disobedience destroyed not only their relationship of friendship and familiarity with God, but also the harmony and peace of their life together. From that moment forward everything between man and woman was, and continues to be, fraught with misunderstanding, mistrust, tension and conflict.

Their sin was henceforth to dominate and dictate every aspect of their life, until such time as they would respond positively to Gods act of compassion, mercy and love in sending his Son Jesus as the Saviour who would bring them back into a loving and caring relationship with each other and a filial love and closeness with him.

That’s the challenging project of life facing every person. And until we embrace it with faith and commitment, we will continue to flounder hopelessly, still blaming everyone and everything other than ourselves.