While many in South Africa recognise Tshimangadzo Samuel Benedict Daswa as a martyr, his story travels a long and costly road to the Vatican where the Holy Father will approve and set the date for his beatification. CLAIRE MATHIESON finds out what is involved in the process of making a saint. 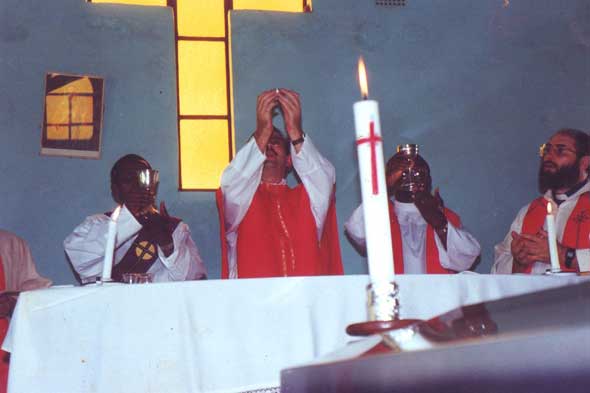 Even at his funeral, the priests wore red vestments as they considered Benedict Daswa a martyr for his faith, and inset, Benedict Daswa.

‘Already at Benedict Daswa’s funeral there was a sense that this man was a martyr for the faith. This was the conviction of the priests who celebrated his funeral Mass wearing red vestments,” said Sr Claudette Hiosan FDNSC, diocesan promoter of the Cause.

In the years following his gruesome ending, local people kept his memory alive by coming together to pray at his grave on the anniversary of his death. “In the year 2000 they approached the local priest to say a special Mass on Benedict’s anniversary and visited the site where he was attacked by the mob that killed him. His widow placed a flower on this spot.”

After Benedict’s death, Bishop Hugh Slattery, retired of Tzaneen diocese, decided to look into this matter with the local parish pastoral council to consider the possibility that Benedict might be a true martyr for the faith.

“At the meeting, several people shared their memories of Benedict and the events around his death. It was very evident that he was an exemplary Christian throughout his life. The decision was taken to conduct a preliminary investigation into the life and death of the servant of God,” said Sr Hiosan.

Traditionally this investigation begins no sooner than five years after the death being investigated. The only time this can been waived is when the pope himself decides to open the process, as was the case for Mother Teresa by Pope John Paul II, and for John Paul II by Pope Benedict.

Following the investigation, the South African Catholic Bishops’ Conference was informed and their approval for a proper canonical investigation was granted.

“The bishops were happy and enthusiastic about the diocese of Tzaneen going ahead with a full canonical inquiry,” said Sr Hiosan. As the investigation into his life is a formal inquiry, the process is lengthy and costly. It is an exhaustive search of the candidate’s writings, speeches, and work. A detailed biography is written and eyewitness accounts are gathered. When sufficient information has been gathered, the investigation of the candidate, who is called “Servant of God”, is presented by the local bishop to the Roman Curia—in particular, the Congregation for the Causes of Saints—where it is assigned a postulator, whose task is to gather further information about the life of the Servant of God.

The investigation was completed in 2010 and all the official documents sent to the Congregation for the Causes of Saints in Rome. The congregation examined these documents and gave the decree of validity.

“Those associated with the Cause in Rome are confident that the Church will soon recognise the Servant of God as a true martyr for the faith through his beatification,” said Sr Hiosan.

The Positio, which is really a book on the life of Benedict, was written by Fr Lucio Di Stefano MSC, a member of the Italian Province of the Missionaries of the Sacred Heart in Rome and official postulator of the Cause.

“He has been working under the direction of the Relator appointed by the Sacred Congregation for the Causes of Saints. Fr Lucio’s part of the work has already been completed and is in the process of being published at the Vatican. It only awaits the introduction, being prepared by the Relator, to complete the publication,” said Sr Hiosan.

The promoter for the Cause said the Positio was a crucial document, based on the testimonies of the witnesses given at the diocesan canonical enquiry. “It sets out to prove that Benedict was a true martyr for the faith.”

After publication, the Positio will be very closely examined by a panel set up by the Sacred Congregation, comprising Church historians, moral theologians and canon lawyers.

“Their judgment will then be presented to the Cardinal Prefect and other archbishops and bishops of the Sacred Congregation for their approval. If that is received, it will then be given to the Holy Father for the seal of his approval and the setting of a date for the beatification.”

Sr Hiosan said not only was the diocese hopeful but so was Fr Di Stefano as the postulator for the Cause in Rome. “When in Rome last June, Bishop Slattery met with Cardinal Angelo Amato, the prefect of the Congregation for Saints, and with the secretary of the Congregation, and told me that both had expressed deep interest in the Cause as being most relevant to the Church’s work of evangelisation in the contemporary world, and particularly in Africa.”

But having Benedict canonised would not only benefit South Africa. Sr Hiosan has already noted growing interest in countries as far away as Italy, the United States, the Philippines, Indonesia, Poland, Slovakia, Australia, Kiribati and nations in West Africa to which prayer cards, leaflets, novena booklets and the DVD on the Servant of God have been sent.

But truly, the greatest impact Benedict’s beatification would make would be in South Africa, especially his home diocese of Tzaneen. His story has been embraced and retold.

“A youth group from one of our parishes produced and staged a drama on Benedict’s life and death which was presented during the diocesan pilgrimage and all-night vigil at Ave Maria pastoral centre last August, as well as in other areas of the diocese. It has been a source of real inspiration to many people,” said Sr Hiosan.

“In promoting the Cause of Benedict Daswa as both a courageous witness to the faith and an apostle of life, we see him as relevant to the wider world, while having a particular relevance to Africa. When he became a Catholic he soon realised that there were issues in African culture that he could no longer accept, such as the widespread practice of witchcraft, sorcery and ritual murder. His principled and public stand against these deep and dark issues in his culture, eventually led him to pay the ultimate price—martyrdom.”

Sr Hiosan said because Benedict lived his Christian calling with zest and enthusiasm, yet at the same time, with modesty and humility—which was evident through all parts of his life—Benedict is “truly an authentic role model for the young churches of Africa. His brutal death through stoning and bludgeoning make him a local hero for Christian communities struggling to break free from the enslavement of the world of witchcraft.”

The diocese of Tzaneen is working hard to promote the Cause by encouraging people to pray for the graces and favours they need through his intercession, particularly by using the novena.

There are also big plans for the diocese. A large plot of land near Benedict’s home has been purchased. “The plan is to develop this area as a pilgrimage centre in the coming years,” said Sr Hiosan.

However, such projects involve considerable expense for the poor, rural diocese. Sr Hiosan said the diocese has initial plans for the construction of a church, priests’ house, hostel accommodation for pilgrims and a small clinic, hoping that later a convent and Catholic school can be added.

“Naturally, all these developments will be affected by how the Cause in Rome progresses,” said Sr Hiosan. In addition, the plans are dependent on the financial assistance the diocese receives.

“Nevertheless, the diocese of Tzaneen is committed to doing its utmost to ensure that if it is God’s will, the Servant of God, Benedict Daswa, will be beatified in the not-too-distant future.”

For more information contact Sr Claudette Hiosan on 015 307 5244 or email bendaswa@mweb.co.za. If you are able to contribute to the cause, deposits can be made to account name: Diocese of Tzaneen: Benedict Daswa Cause, Standard Bank, account 330911538, branch 052749.