There are two major differences between the conclave of 2005 and that of 2013. The first is that the failing health of Pope John Paul II had given us ample notice that his pontificate was coming to a close. By contrast Pope Benedict XVI appeared to be in good health even just three months before he announced his resignation. 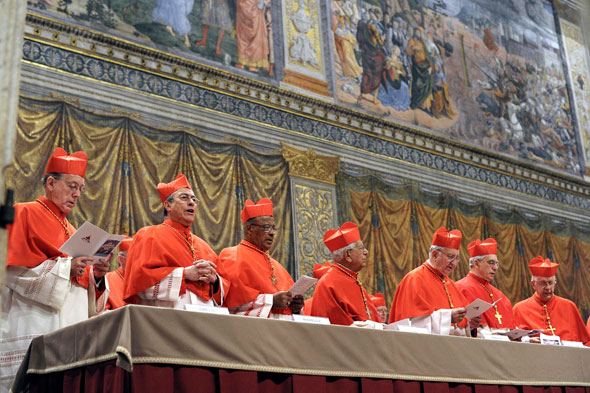 “Because the See of Peter had become vacant by resignation rather than death, there were more uncertainties than usual.”

Everyone was taken totally by surprise; first by the fact of his resignation itself, but second even more by its timing, so soon before Easter, which has always been an extremely special time for him. You have only to think of the Stations of the Cross on Good Friday, for which he had different people compose the prayers and reflections each year.

It was also surprising because World Youth Day (WYD) was only a few months away and that also had a very special place in Pope Benedicts heart. He loved being with the youth, as we saw in the previous WYDs in Cologne in 2005, Sydney in 2008 and Madrid in 2011. What I remember particularly from Madrid was how he refused to go down from the podium to find shelter during a vicious thunderstorm, saying If the young people have to sit through the storm, so will I.

Because the See of Peter had become vacant by resignation rather than death, there were more uncertainties than usual. For instance, when would the cardinals be summoned to Rome and under what circumstances? Would there be a farewell Mass or some other ceremony, and when would that take place?

In the end it was up to each cardinal to decide for himself. A good number, perhaps even the majority, came early and were therefore in time to bid farewell to Pope Benedict on the day his resignation took effect, February 28.

What a touching moment it was as one of the senior cardinals thanked Pope Benedict for his sterling service to the Church as theologian, diocesan bishop, prefect of the Congregation for the Doctrine of the Faith, bishop of Rome and pope.

Pope Benedict responded by in turn thanking all the cardinals and curial officials for their love, support and cooperation in the service of the universal Church.

Then each one had the opportunity to greet and thank him personally. As I did so I kept in mind his earnest request for prayers made the day he was elected pope and reiterated at the farewell. Consequently I ask every priest who celebrates Mass in the archdiocese of Durban to include Benedict our Pope Emeritus in the Eucharistic prayer after mentioning Pope Francis.

The second major difference between Conclave 2005 and 2013 was the fact that there was no funeral or period of mourning. So the congregations of cardinals could begin immediately and would be focused solely on the conclave to elect the new pope.

However, the date for the conclave to begin would be set only when all the cardinal electors were present in Rome. That was not really a problem as it gave the cardinals more time to prepare by sharing their visions for the Church, their worries and concerns, their hope and fears.

Thus the state of the Church from the Vatican, the curia and the diocese of Rome to the Vatican State, the continental Churches, as well as relations between the Church and the world at all levels were discussed in great detail.

From these discussions the new pope would have a pretty good word-picture of the kind of Church he would be leading in a world full of tremendous challenges. But he would also know that he was not alone.

The congregations of cardinals continued until the arrival of the last cardinal elector in Rome. Accordingly Tuesday March 12 was agreed on as the day on which we would go into conclave to elect the new pope.