About a year ago, a group of concerned Catholics in Durban struck upon the idea of starting a group called Catholics Awake. Their aim was to support the archdiocese with various projects, through which the Word is spread and put into practice. 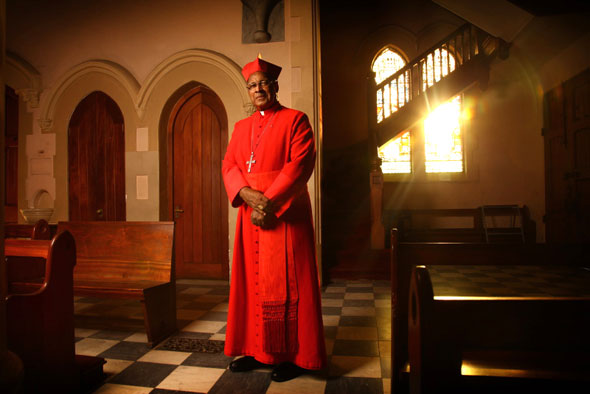 This photo of Cardinal Wilfrid Napier by renowned photographer Matthew Willman is available in a limited edition print of only 100 at the price of R5000 each. The proceeds of the sale of these photos will go to support various projects of the archdiocese of Durban, which will be identified and reported on later.

Above all, they were also keen to inform the Durban parishes about the life and activities of their cardinal.

I welcomed this initiative enthusiastically, instinctively feeling that this group could play an important role in making the many archdiocesan projects known and supported.

In the past year, Catholics Awake has held three very successful breakfasts, giving me the opportunity to meet a variety of people from most parishes in Durban in a relaxed and familial atmosphere.

Their latest project is called Friends of the Cardinal. Those who wish to join are asked to offer daily prayers for my intentions as well as to offer their services, time, talents and donations wherever possible. In return the members receive certain regular information about the archdiocese as well as a Getting to know the Cardinal newsletter. How wonderful it is to know that so many people are offering prayers on my behalf daily.

One of the fundraising ideas has been to make available a limited edition portrait. The skills of renowned South African photographer Matthew Willman, who is best known for his iconic photographs of Nelson Mandela, was engaged and after an interesting professional photo shoot, a photograph taken in Durbans Emmanuel cathedral was chosen.

The photograph measures 400×600 and is signed by myself and also by Mr Willman. Only 100 of these photographs are available and they cost R5000 each. These are, I am told, collectors items.

I must admit that Matthew has captured a beautiful image.

The team is hoping to sell all 100 pictures to raise much-needed funds for the many projects which will be identified and reported on later.

It is heart-warming to see the initiative of this group and I enjoy working with them as they spread the works of the diocese. Hopefully similar groups will be formed throughout the country.