The Dream of One United Church

Every year, from January 18-25, the Church observes a Week of Prayer for Christian Unity. How did this come about? Meet Paul Wattson, a “Prophet of Unity”, for the whole story. 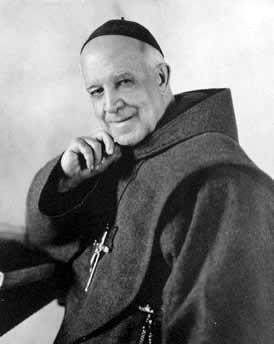 Born in 1863 in Millington, Maryland, he was baptised Lewis Thomas Wattson. Like his father, he became an Episcopalian (US?Anglican) minister.

Wattson lamented the divisions of Christians in the one Church of Christ, and saw it as simply scandalous that new churches were being born out of such divisions.

He believed in a Church that he understood as a “mighty Christian organism, which has come down to us from Jesus and his Apostles under the name of the Holy Catholic Church and which exists today in three great historic communions: the Roman, the Greek, and the Anglican Communion, the last of which comprises all the English-speaking Catholics throughout the world who are members of the Anglo-Catholic Church”.

After reading a book about the life of Il Poverello — St Francis of Assisi — Wattson created a religious community within the Episcopal Church in the Franciscan rule of life.

What name would he give his new order? Like St Francis, he counted on Providence. He opened the Bible randomly three times and choosing the verses from those pages, he fell on John 7:37-39 (receive the Holy Ghost), Romans 5:11 (atonement through Jesus Christ), and 1 Corinthians 11:23-25 (the institution of the holy sacrifice of the Mass).

He chose “Atonement” as the name of his order. But then he read the word “atonement” in a manner thoroughly original: as an “at-one-ment”, pointing to being one. Thus, he would consecrate himself for the union of all Christians.

He founded the Society of the Atonement in collaboration with a young woman called Lurana White, a nun in the Episcopalian order of the Holy Child.

Sr Lurana longed to be part of a religious community that corporately took the vows of chastity, poverty and obedience. She wrote to Wattson inquiring if he knew an order in the Episcopalian Church which took those vows corporately. There was none. So Wattson proposed to Sr Lurana that she head a women’s branch of the Society of the Atonement. So she left the order of the Holy Child to do so.

Though still being Episcopalian, the society preached the primacy of the Roman pontiff. Due to this, its members were criticised and excluded by their fellow religionists. Finally, the entire society sought admission to the Roman Catholic Church. In October 1909 the Vatican accepted the members of the society as a corporate body, but allowed the friars and sisters to remain in their order.

The best known of Fr Paul’s works is the annual observance of the Chair of Unity octave, which began in 1908. The octave extended from the commemoration of the Chair of St Peter (at that time celebrated on January 18, but now on February 22) to the feast of the conversion of St Paul, January 25.

In January 1910, Fr Paul received a letter from Pope Pius X, sending his “wholehearted blessings to Father Paul, the Society of the Atonement and the spread of the octave of Prayer for Unity”. This encouraged Fr Paul to launch a letter-writing campaign to Catholic bishops all over the world. The response was so positive that on February 25, 1916 Pope Benedict XV officially recognised the octave as a form of prayer for the Universal Church.

Fr Paul died in 1940 but his work continues. Today many Christian denominations observe the Week of Prayer for Christian Unity.

Besides that, the Society of the Atonement is now established throughout the world with friars and sisters working and praying for the realisation of Jesus’ prayer, “that all may be one”, thanks to this saint and true prophet of Christian unity.