This was the Synod

The primary purpose of the synod on the Pastoral Challenges of the Family in the Context of Evangelisation or Synod 14 was in general to proclaim the Gospel of the Family as an integral part of the mission of the Church and in particular to consider how to respond to the widespread cultural, social and spiritual crisis which is posing a serious challenge to the Church’s work of enabling families to accept, live and pass on the Gospel of Jesus Christ to the next generation. 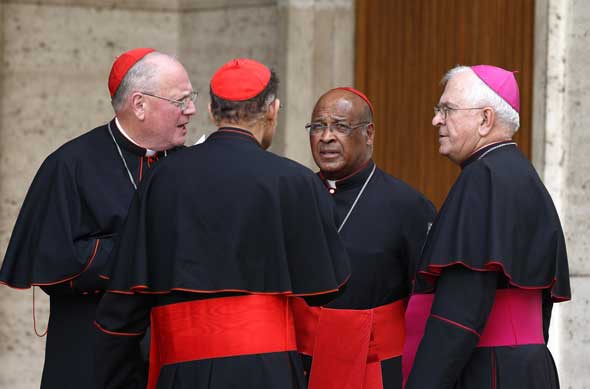 Cardinal Napier (second from right) in conversation with Cardinals Timothy Dolan of New York and Oswald Gracias of Mumbai, and Archbishop Joseph Kurtz, president of the US bishops? conference after a session of the family synod. (Photo: Paul Haring/CNS)

A secondary purpose was to reaffirm the Church’s teaching on marriage and the family as part of God’s plan revealed by him as a special relationship between a man and a woman, based of mutual love and self-giving and geared towards fruitfulness understood as the procreation and raising of children.

In the Catholic Church’s Code of Canon Law, a synod is described as a group of bishops selected from different parts of the world, who meet together at specified times to promote the close relationship between the Roman pontiff and the bishops.

These bishops, by their counsel, assist the Roman pontiff in the defence and development of faith and morals and in the preservation and strengthening of ecclesiastical discipline. They also consider questions concerning the mission of the Church in the world.

To understand Synod 14, it is necessary to see it against the frame of reference of its purpose, which was to identify, analyse and evaluate the challenges facing marriage and family at this time.

The theme was set out in three parts dealing with:

The Gospel of the Family which is God’s plan revealed to man and woman who have been married in Christ and called to live in accordance with the Scriptures and the teaching of the Church;

The problems and challenges in marriage which are calling for pastoral care;

Openness to life, understood as being committed to having children and raising them up according to the Gospel of the Family.

All of this was set out in the Instrumentum Laboris (working document) drawn up from the worldwide consultations carried out by local bishops’ conferences in response to the questionnaire authorised by Pope Francis and sent to as wide an audience as possible.

Following the solemn opening Mass in St Peter’s basilica on October 5 the synod began with the presentation of a summary of the working document and the clearer and more precise explanation of the theme and scope of work of the synod.

This was followed by four days of presentations by synod members (bishops and men superiors general) lay observers (married couples and others), and ecumenical delegates.

At the end of the presentations a summary was drawn up and presented as the Relatio post Disceptationem (Report after the Debate). This second working paper was also studied, discussed, amended, redrafted and so on by the ten discussion groups into which the synod was divided to facilitate discussion in the language and theme of choice.

It is important to note that this was a report to the synod to set out more systematically what had been presented to it up to that point.

This second working document dubbed Mid-term Report by the media caused a veritable media firestorm with sensational headlines, announcing and explaining major changes to the Catholic Church’s position on phenomena such as cohabitation, divorce and remarriage, and homosexuality, in particular same sex unions.

Needless to say there was a shocked reaction by many synod members. The main reason for their shock was that the Mid-term Report had been presented to the media before they had received and studied it, and especially that the media had understood it to be a document that had already been accepted by the synod as its official response to the issues under discussion.

This was totally incorrect. In fact, is was not true! The synod members had not even seen what the media was declaring to be their document. They saw it for the first time that Monday morning shortly after it had been presented to the world at the media briefing!

The ten small groups spent three days working on the Mid-term Report, transforming it into the Report of the Synod (Relatio Synodi).

What emerged from the small groups was a very different document�different because the sensation-making statements had been expunged; different above all because its focus was more sharply on marriage and the family as key institutions in the Church and in society which today are being seriously challenged by modern trends.

The final report was drawn up by a committee of nine cardinals, bishops and priests appointed by Pope Francis. These worked under considerable pressure to bring together the many proposals to correct, amend or redraft sections of the document so that they would reflect the considered views of the synod, and not those of individual members.

The final stage of the synod was the voting on the document paragraph by paragraph. The resulting document would become the first working document to be discussed once again in the local Churches of the world in preparation for the next ordinary synod, to be held in October 2015.

The theme of that synod will be �The Vocation and Mission of the Family in the Contemporary Church and World�. It is envisaged that in the intervening year, the local Churches will concentrate particularly on how the Church at local and universal level will formulate practical ways and means of addressing the problems identified at Synod 14.

I thank God for a unique experience of what it means to be part of the Catholic Church in today�s world full of challenges.