The Patroness of Christian Unity

This month I’d like to introduce to you the patroness of Christian unity, Maria Gabriella Sagheddu. She was born in 1914 in Italy. 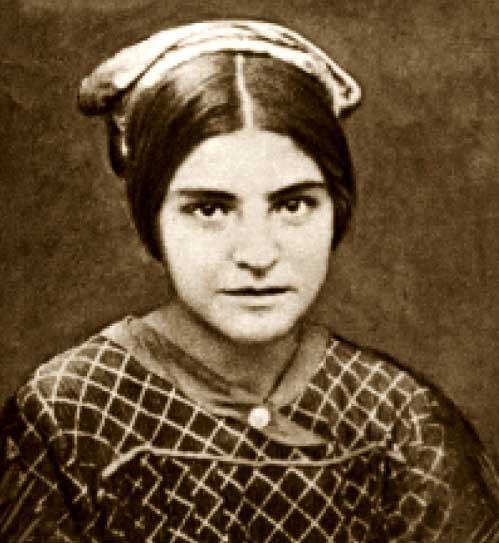 Motivated to deepen her piety she enrolled in a Catholic youth group called Azione Cattolica (Catholic Action) at the age of 18 where she dedicated herself to teaching catechism to her fellow youth, helping the aged and to the life of prayer.

At the age of 20, desiring to consecrate herself to God as a nun, she entered the Trappist monastery in Grottaferrata, near Rome. There she encountered the abbess of the monastery, Mother Pia Gullini, who was passionate about ecumenism, inspired most especially by Fr Paul Couturier, whom I wrote about last month.

The turning point for Sr Maria Gabriella was the promotion of novenas throughout Europe in the mid-1930s through pamphlets that encouraged people to pray and make sacrifices for Christian unity. The nuns at Grottaferrata took part in such novenas, and in a personal way Sr Maria Gabriella was so touched that she found a new vocation.

She was delighted to have the favour of the abbess who granted her permission to dedicate herself specially to praying for Christian unity while still remaining a nun in the monastery.

That very night Maria suffered pain in her shoulder and later she was diagnosed with tuberculosis.

She accepted her suffering and offered it as spiritual sacrifice for the unity of Christians. After about one and half years of suffering she died on April 23, 1939. Remarkably, the reading for that Sunday included the words from the Gospel of John: There will be one flock and one shepherd (10:16).

Maria Gabriella was beatified by Pope John Paul II on January 25, 1983, at the end of the Week of Prayer for Christian Unity.

Possibly someone may object: Maria lived a cloistered life and possibly never met Christians of other denominations, never participated in ecumenical meetings. How, then, can she be the patroness of Christian unity?

Such an observation would be fair comment. Yet, it takes nothing away from her consecration for unity to which her own life testifies.

After her death, it was discovered that in her Bible chapter 17 of St John’s gospel, especially in verses 11 and 21, in which Jesus prays for unity of his disciples, had become yellowed and worn from being read often. For Sr Maria Gabriella, Christian divisions were wounds to the body of Christ for which she prayed for healing.

And in his encyclical on Christian unity, Ut Unum Sint (That They May Be One), John Paul II testifies: Praying for unity is not a matter reserved only to those who actually experience the lack of unity among Christians. In the deep personal dialogue which each of us must carry on with the Lord in prayer, concern for unity cannot be absent.

Only in this way, in fact, will that concern fully become part of the reality of our life and of the commitments we have taken on in the Church. It was in order to reaffirm this duty that I set before the faithful of the Catholic Church a model which I consider exemplary, the model of a Trappistine Sister, Bl Maria Gabriella of Unity, John Paul II wrote.

Sr Maria Gabriella, called by her vocation to be apart from the world, devoted her life to meditation and prayer centred on chapter 17 of St John’s Gospel, and offered her life for Christian unity…

The example of Sister Maria Gabriella is instructive; it helps us to understand that there are no special times, situations or places of prayer for unity. Christ’s prayer to the Father is offered as a model for everyone, always and everywhere, the pope wrote.

In her short life in the convent  just three years  Sr Maria Gabriella assumed an attitude that was ecumenical in nature, fitting and possible in an enclosed life. She lived the little way of ecumenism which, for her, meant converting from selfishness and pride which most often nourish divisions. Hers was not a theoretical expose of ecumenism but an ecumenical attitude in her daily life.

Maria might not have appeared in ecumenical gatherings and left no laudable ecumenical discourse, but nonetheless lived fully a true ecclesial spirituality of faith in love and unity.

Maria’s body is housed in the chapel of Unity at the Trappist monastery of Our Lady of St Joseph at Vitorchiano, about 70km north-west of Rome.

Naming her a patroness of the ecumenical movement is, on one hand, a recognition of her consecration for unity and, on the other, a loud demonstration look, here is a model to emulate.

Read about previous Saints of Christian Unity at www.scross.co.za/category/perspectives/chama/