NEW YORK (CNS) – Fillet it how you will, “Minions” (Universal) is a rare treat. 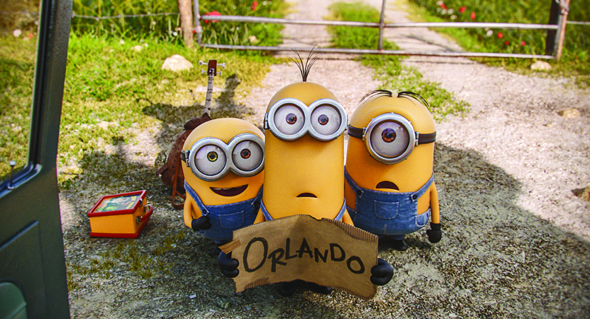 Minions star in a scene from the movie “Minions.” (CNS photo/Image.net).

This bright 3-D animated comedy traces the history of the yellow, capsule-shaped creatures whose endearing presence in the background contributed to the success of both 2010’s “Despicable Me” and it’s rather unimaginatively titled 2013 sequel, “Despicable Me 2.”

In hauling these sweetly bumbling beings to the fore and providing them with an ever upbeat – though not always tightly crafted – adventure of their own, co-directors Pierre Coffin and Kyle Balda avoid any genuinely objectionable material. Only a few scenes of combustive mayhem and a couple of mildly out-of-place visuals may give some parents pause.

After an origins story that reaches all the way back to the primordial ooze, the proceedings settle down in the swinging London of the 1960s. There, motivated by their natural inclination is to serve a villainous master, the central trio of minions – Kevin, Stuart and Bob (all voiced by Coffin) – assist famed criminal Scarlet Overkill (voice of Sandra Bullock) and her mad scientist husband Herb (voice of Jon Hamm) in their wild scheme to steal the British crown from Queen Elizabeth II (voice of Jennifer Saunders).

Narrated by Geoffrey Rush, and interspersed with familiar hippie-era musical standards, the freewheeling plot that follows pursues its own logic down curious courses, some of which feel like detours. But the underlying morality is sound enough.

In contrast to Gru, the supposed bad guy of the earlier outings, Scarlet is a truly negative character given to selfishness, greed and disloyalty. Her evil tendencies, which carry straightforward consequences, are all the more obvious when compared to the virtues consistently displayed by Kevin and his pals – an appreciation for one another and a sensitivity to the common good prominent among them.

The climactic conflict might prove too much for small fry. In the build-up to it, a few possible irritants for vigilant grown-ups also appear, including a sumo wrestler’s frequently glimpsed backside and the brief presence of a mustachioed bystander whose enthusiasm for Scarlet leads him to dress exactly like her. While treated comically, his quirky behaviour may not sit well with some adults.

The film contains occasional cartoonish violence, fleeting anatomical sight gags and a touch of scatological humor. The Catholic News Service classification is A-I – general patronage. The Motion Picture Association of America rating is PG – parental guidance suggested. Some material may not be suitable for children.

NEW YORK (CNS) – Faint glimmers of morality can be discerned amid the decadence of “Entourage” (Warner Bros.), a comedy that simultaneously satirises and wallows in Hollywood excess. 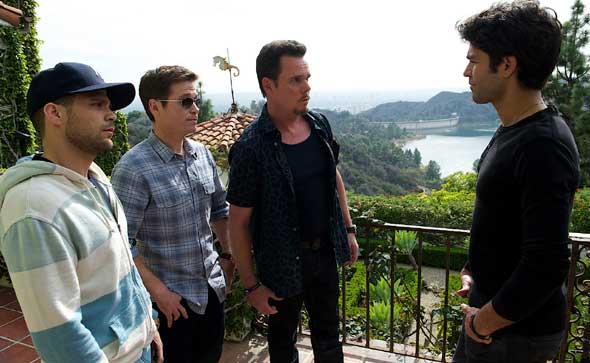 But these weak ethical beacons in writer-director Doug Ellin’s big-screen version of the TV series he created for HBO are vastly outshone by the glare of his film’s glamorised materialism, an outlook that includes a blatantly debased attitude toward human sexuality.

Fans of the popular cable show, which ran for eight seasons beginning in 2004, will already be familiar with Queens-bred movie star Vincent Chase (Adrian Grenier) as well as with the hard-driving agent who first discovered him, Ari Gold (Jeremy Piven).

They’ll also recognise the trio of devoted hangers-on who have followed Vince on his coast-to-coast journey to fame: his feckless half-brother, Johnny (Kevin Dillon); his best buddy-turned-manager, Eric (Kevin Connolly); and Turtle (Jerry Ferrara), another hometown pal who once served as Vince’s driver before achieving outsized success of his own as a tequila tycoon.

As the multiplex variant of the story kicks off, Vince convinces Ari – who has left agency work behind to take on the role of a studio executive – to let him direct as well as act in a high-concept adaptation of Robert Louis Stevenson’s classic novella “The Strange Case of Dr. Jekyll and Mr. Hyde.”

When the production starts running over budget, however, the movie’s Texas-based financial backer, Larsen McCredle (Billy Bob Thornton), and Larsen’s egotistical son, Travis (Haley Joel Osment), become increasingly dissatisfied – and intrusive. Their disruptive demands put a strain on Vince’s relationship with his loyal retinue, each member of which is also preoccupied with problems of his own.

Ellin elicits the occasional smile with his send-up of Tinseltown’s eccentricities. And his script makes a few nods in the direction of loyalty to family and friends as well as toward artistic integrity.

Yet the libido-driven proceedings he helms – the central quartet explicitly acknowledge that the pursuit of sexual conquest is the primary motivation in their lives – find Eric bedding two newfound acquaintances within the course of a few hours. Though this eventually entangles the would-be good guy in something of a cautionary tale, his underlying assumptions, like those of his companions, remain unchanged.

Given this uncritical context, it comes as no surprise that a prominent subplot involving a same-sex wedding is treated as a cue for frivolous, reflexive celebration.

The film contains misguided values, including a benign view of drug use and of homosexual acts, graphic scenes of aberrant behaviour and casual encounters with upper female and rear nudity, fleeting gore, frequent uses of profanity and pervasive rough and crude language. The Catholic News Service classification is O – morally offensive. The Motion Picture Association of America rating is R – restricted. Under 17 requires accompanying parent or adult guardian.

How Truly Getting Christ Can Transform Us