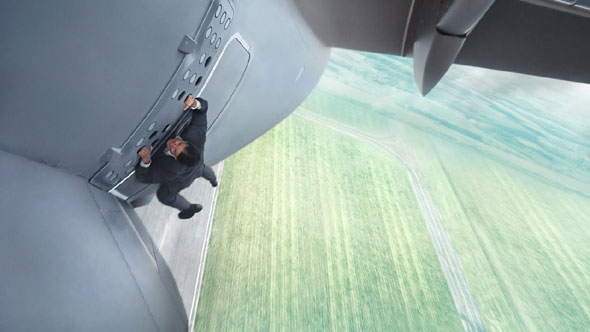 As helmed by writer-director Christopher McQuarrie, this fifth installment in a franchise that dates back, on the big screen, to 1996 – and that began life as a CBS-TV series a full three decades before that – delivers a steady but stylised parade of action. The result is a nifty espionage adventure that most parents will likely find acceptable for their older teens.

Viewers of any age looking for something more substantive than a fun, globe-trotting ride – with occasional reflections on the conflict between personal and patriotic allegiances thrown in along the way – will, however, scratch this picture’s slick surface in vain.

But, then, profundity has never been this property’s foremost agenda item anyway, whatever the medium. The point here is to waste as little time as possible before positioning agent Ethan Hunt – Tom Cruise, of course – on the outside of an airplane that’s roaring off the runway in some ex-Soviet republic, and making the fate of humanity depend on his sheer, headwinds-be-darned stick-to-itiveness.

This time out, Ethan and his colleagues on the Impossible Mission Force – an IMF even Greek moviegoers can love – are battling an underground terrorist organisation of global reach called The Syndicate. (You can tell they must be dangerous by that capital T.)

Unfortunately for the good guys, Alan Hunley (Alec Baldwin), the stubbornly jealous director of the CIA, stoutly denies that The Syndicate exists. Worse yet, over the fruitless objections of the IMF’s representative, William Brandt (Jeremy Renner), Hunley convinces the Senate committee charged with such matters to shut his rivals’ super-secret agency down altogether.

Still, they don’t have much to work with: Hunt has gotten a glimpse of The Syndicate’s villainous top dog, pasty faced Solomon Lane (Sean Harris). And he’s been helped out of a fix by mystery woman Ilsa Faust (Rebecca Ferguson). Though Ilsa turns out to be a British agent who has managed to infiltrate The Syndicate, her true loyalties remain uncertain.

The interaction between Ethan and Ilsa is not exactly all business. But those with enough brand memory to recall that Ethan is a married man will not be surprised to observe that romance, in this iteration of his eventful biography, is kept at the level of significant glances and tellingly raised eyebrows.

Along with not overheating things for the younger set, this brake on the central duo’s flirtation also allows Ilsa – whose skills in one dust-up after another impress even Ethan himself – to stand on her own two, jujitsu-wielding feet.

The dialogue occasionally ponders the morality of all the violence Ethan and his buddies deal out in defense of the American Way. Are such means justified in pursuit of justice writ large? How can operatives resist the urge to revel in mayhem for its own sake? The answer to these important ethical questions is: Do-dah-do, do-dah-do…

The film contains pervasive but virtually bloodless violence, brief glimpses of partial nudity and a couple of uses each of profanity and crude language. The Catholic News Service classification is A-III – adults. 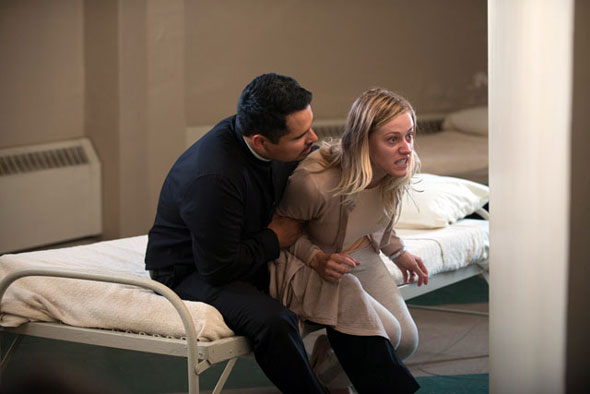 Michael Pena and Olivia Taylor Dudley star in a scene from the movie “The Vatican Tapes.”(CNS photo/Lionsgate).

Well, in the case of “The Vatican Tapes” (Lionsgate), things could, conceivably, have been worse.

With, perhaps, little funds for gore, director Mark Neveldine focuses instead on the Satan-subduing rite – always a popular spectacle with moviegoers – that takes up his film’s final 15 minutes.

In most cases, the familiar big-screen sight of men in clerical collars battling demons – or in this instance, the Antichrist himself – swerves at least into broad caricature. At worst, the outworn trope degenerates into sacrilegious and grotesque parodies of Catholic religious practice.

“The Vatican Tapes” avoids most of this and is somewhat reverent, with both a relatively straightforward ritual and a taciturn priest, Father Lozano (Michael Pena). He’s a tough guy, a tattooed former military chaplain who maintains his dignity throughout – although he has little to say, either on his own behalf or that of the faith.

Appropriate histrionics come from the writhing object of his ministrations, Angela (Olivia Taylor Dudley). They’re reinforced by sepulchral Cardinal Bruun (Peter Andersson). Having been possessed himself when he was 12, His Eminence, it seems, is taking Angela’s case personally.

The “tapes” of the title refer to screenwriters Christopher Borrelli and Michael C. Martin’s conceit that, since the advent of motion pictures, circa 1900, the Vatican has maintained a secret visual archive – along with more traditional print files – on the subject of exorcism.

This establishment, which looks like a mildewed Costco with stone walls, is chockablock with scraps of film and videotape as well as box after box of written material chronicling the church’s unending fight with Satan.

As though to invoke an imprimatur by association, the picture opens with a montage that includes archival news footage of Sts. John XXIII and John Paul II, with images of the current pontiff thrown in for good measure.

Movies with tight monetary constraints often have to resort to this sort of thing to achieve that “ripped from the headlines” feel. Here, the filmmakers are merely digging for gothic gravitas, an effect that would probably come across more successfully were Pope Francis not, characteristically, beaming with good humor.

The plot – more of a plod, really – has the forces of the netherworld somehow grabbing hold of Angela during a hospital visit after she slices her hand while cutting a birthday cake.

Not only does this sulfurous intervention further spoil the party, it confounds Angela’s gruff, devout father, Roger (Dougray Scott), her perpetually confused boyfriend, Pete (John Patrick Amedori), and Dr. Richards (Kathleen Robertson), the analyst assigned to treat what appears at first to be mere psychosis. (Freud before faith is always the way in these matters.)

Possession gives Angela telekinesis and, for a time, the ability to compel others to commit murderous deeds. Oh, and she’s constantly attended by a raven.

Unlike the one bugging Edgar Allan Poe all those years ago, this bird keeps mum, which, however, doesn’t stop yet another clergyman mixed up in the business, Vicar Imani (Djimon Hounsou), from labeling it “the Devil’s messenger.”

Quoth the critic: “Nothing more.”

The film contains some mildly gory violence, occult themes, a sloppy portrayal of Catholicism and fleeting uses of profanity and of rough language. The Catholic News Service classification is L – limited adult audience, films whose problematic content many adults would find troubling.

Minions By John Mulderig, Catholic News Service NEW YORK (CNS) - Fillet it how you will, "Minions" (Universal) is a...