NEW YORK (CNS) – Some things, as we know, improve with the passage of time. Alas, film adaptations of the video game series “Hitman” do not seem to be a case in point. 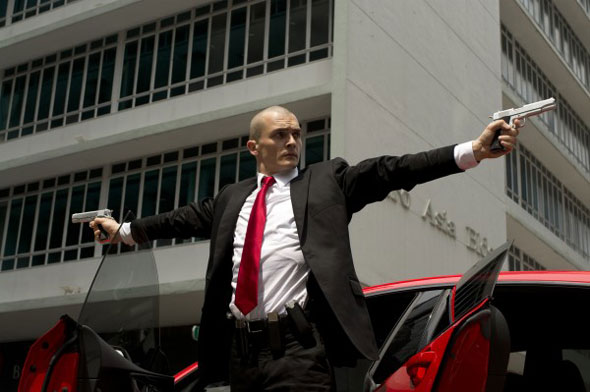 Rupert Friend stars in a scene from the movie “Hitman: Agent 47.” (CNS photo)

Eight years ago, we steered readers away from the initial version. Our current advice: Rebuff the reboot.

One of the first defects to become apparent, on a purely cinematic level, is the picture’s overly explicated, yet under-accounted-for plot. Perhaps the best way to approach this partly burned, partly runny omelet is to observe that virtually everyone of any significance in the cast is hunting for the same person: to wit, a fugitive biologist called Litvenko (Ciaran Hinds).

Litvenko’s estranged daughter, Katia (Hannah Ware), wants to reconnect with her missing dad for personal reasons. The otherwise unnamed purebred assassin of the title (Rupert Friend), whose genetic engineering was supervised by Litvenko, has a contract to fulfill – and, apparently, no feelings to spare for anyone he might harm while completing it.

Then there’s obviously-not-my-real-name John Smith (Zachary Quinto). Though he starts off by posing as Katia’s self-appointed protector, Smith has reasons of his own for tracking the solitary girl and, through her, Litvenko.

Working away in the shadows, meanwhile, is a reclusive underworld kingpin named Le Clerq (Thomas Kretschmann) who would also like to get his hands on Litvenko.

Some of the dialogue in Skip Woods and Michael Finch’s script feebly defends free will in the face of the immoral manipulation to which Agent 47 and others of his ilk have been subjected. “We determine who we are by what we do,” Katia insists as she works to counter 47’s fatalism.

But philosophy is hardly the point. Eliminating extras is the real agenda, and the means of death range from the familiar, viz., bullets and car crashes, to the gruesomely exotic. Falling squarely into the latter category are the conveniently placed airplane engines that are made to double, courtesy of the special effects department, as human meat grinders.

The film contains pervasive nasty violence with excessive gore, brief partial nudity, a couple of profanities and about a half-dozen uses each of rough and crude language. The Catholic News Service classification is O – morally offensive. The Motion Picture Association of America rating is R – restricted. Under 17 requires accompanying parent or adult guardian.

NEW YORK (CNS) – In the visceral boxing drama “Southpaw” (Weinstein), a seasoned trainer tries to convince a broken-down fighter that boxing is more mental than physical. 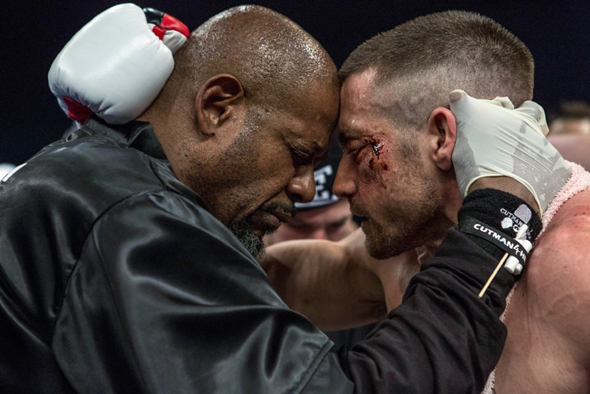 Forest Whitaker and Jake Gyllenhaal star in a scene from the movie “Southpaw.” (CNS photo)

A successful practitioner of “the sweet science” must use his head and strategize. Thinking is more important than punching.

No doubt boxing has a cerebral dimension. Fighting smart, at least smarter than one’s opponent, is better than the alternative. But the express aim of the inherently violent game is to hurt the other guy physically. Outthinking him is a means to inflicting more bodily damage than you receive.

If the viewer comes away believing that anyone who chooses to box is not very smart or, rather, is opting to use his or her head in the dumbest of ways, it doesn’t mean “Southpaw” is a failure. On the contrary, it is so effective at depicting the toll exacted by the sport that boxing becomes a source of fascination, no matter how seemingly irrational and barbaric.

As in most boxing flicks, boxing is both the problem and the solution – the source of the protagonist’s woes and the vehicle for his (or her) redemption. And yet, because violence is at the root of the game, “Southpaw” is inescapably, if not completely, problematic on a moral level. Also, the audience is pummelled by a near-constant barrage of profanity.

The advice about using one’s mind instead of wildly unloading on your adversary is offered to the title character Billy Hope, light-heavyweight champion of the world. Played by a chiseled Jake Gyllenhaal, Billy is first seen preparing to enter the ring for a major bout.

According to the rap song (written and performed by Eminem) blaring on the soundtrack, he’s a “beast.” He’s reached the pinnacle of boxing because he fights like a maniac, with no regard for his own safety. He puts up little defence and gets pulverised, but he always withstands the onslaught and finds a way to win.

In their gaudy suburban mansion after this fight, Billy’s 10-year-old daughter, Leila (Oona Laurence), ritualistically counts all the wounds on his face. He’s bruised and battered. It takes hours for the blood to stop oozing from his nose and mouth and days for his left eye to stop glowing like red marble. But he’s the champ.

Billy and his wife, Maureen (Rachel McAdams), met as preteen orphans in the Hell’s Kitchen section of Manhattan. They’re deeply in love and she’s his biggest supporter. But she can no longer let him endure the punishment. She urges him to retire or at least take a break. “You’re gonna be punch-drunk in two years if you keep this up,” she argues, presumably aware he already appears addled – perpetually woozy to the point people frequently assume he’s inebriated or high on drugs.

Then tragedy strikes. Billy is dealt a wrenching blow outside the ring. In the aftermath of this personal crisis, his manager Jordan Mains (played with a believable mix of charm and menace by the rapper Curtis “50 Cent” Jackson) is no help. Billy loses all of his money, his house and just about everything he holds dear.

Can he wise up and channel his sorrow and rage into productive behavior? Humbled and emotionally fragile, he makes his way to the ratty, inner-city gym run by Titus “Tick” Willis (Forest Whitaker), a no-nonsense trainer who agrees to teach him how to protect himself in the ring and, in effect, become a smart pugilist.

During the first third of the movie, director Antoine Fuqua (“Training Day”) does a masterful job of making the brutal allure of boxing as palpable as the bond between Maureen and Billy. Grittily realistic camerawork and tremendous acting by Gyllenhaal and McAdams contribute to an atmosphere that’s both lurid and heartfelt. There’s no attempt to analyse Billy’s masochistic personality. The images, many featuring copious amounts of blood, say enough.

What follows is more melodramatic and less compelling. Billy’s professional comeback happens too easily and his emotional recovery, including a painful domestic situation, is implausibly linked to his return to the ring. The all-important character of Tick is not fully formed, despite Whitaker’s solid efforts and despite getting some of the choicer lines in Kurt Sutter’s script.

By telling of a man who makes his living by being violent and is brought low by a violent act, then saves himself by engaging in further, albeit more tactical, violence, “Southpaw” tries to have it both ways. How can a cautionary tale about violence offer violence as the answer? This question pertains to the genre tropes of boxing movies and storytelling conventions in general. It also mirrors the puzzle surrounding this anachronistic sport. How can we be drawn to boxing and repelled by it at the same time?

The film contains pervasive rough, crude and crass language, much bloody boxing violence, brief foreplay prior to a married couple’s off-screen lovemaking, a character on the verge of suicide, a scene of gun violence, an instance of partial male nudity and some drinking. The Catholic News Service classification is L –limited adult audience, films whose problematic content many adults would find troubling. The Motion Picture Association of America rating is R –restricted. Under 17 requires accompanying parent or adult guardian.