NEW YORK (CNS) – The proper limits of free speech and the appropriate use of violence are just two of the topics raised in the striking but gritty dramatisation “Straight Outta Compton” (Universal). 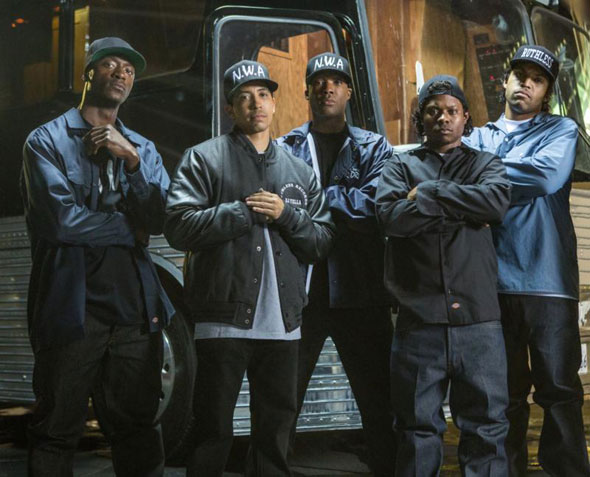 As he recounts the rise and collapse of the gangster rap group N.W.A, beginning in 1986, director F. Gary Gray clearly intends to use the ensemble’s experiences as a vantage point for a larger critique of society as a whole.

While there’s no denying the serious intent behind Gray’s collective biography, the yawning gulf between the materialistic lifestyle the whole genre of hip-hop tends to glamorize and an outlook based on scriptural values is equally indisputable. Jonathan Herman and Andrea Berloff’s script nibbles at the edges of the art form’s assumptions, but never fundamentally challenges them.

The story focuses primarily on the two members of N.W.A – Ice Cube (played by the rapper’s son, O’Shea Jackson Jr) and Dr. Dre (Corey Hawkins) – who went on to have headlining solo careers as well as on Eazy-E (Jason Mitchell), another founder whose life took a different turn. This trio’s goal, shared with collaborators DJ Yella (Neil Brown Jr.) and MC Ren (Aldis Hodge), is to translate the frustrations of growing up in the Los Angeles-area ghetto of the title into popular protest music.

Aided by seemingly good-hearted manager Jerry Heller (Paul Giamatti), who successfully markets their sound, the guys parlay their local notoriety into nationwide fame. But controversy dogs them, based largely on the perception that some of their lyrics call for attacks on the police.

The nature and legitimacy of N.W.A’s actual stance is open to debate. But there’s no getting around the fact that cops – whether they hail from Southern California or the Midwest – are relentlessly demonised in “Straight Outta Compton.”

In the current climate of alienation between minority communities and law enforcement, such vilification becomes more than mere evidence of a narrow cinematic perspective. Reinforced by images of the Rodney King beating – and news accounts of the acquittals that followed for the officers involved in it – this unbalanced portrayal skirts the border between radicalism and irresponsibility.

The movie’s outlook on violence in general, at least of the retaliatory sort, is ambiguous at best. Giamatti earnestly counsels Eazy-E to seek only legal means of redress after the singer is assaulted by menacing, semi-psychotic record producer Suge Knight (R. Marcus Taylor) –- who in summer 2015 awaits trial on murder charges stemming from an incident that, ironically, took place on the “Compton” film set.

Yet Heller, the only white character of any significance in “Compton,” turns out, in the end, to be more of a greedy manipulator than a genuine mentor. And an earlier scene has made giddy fun out of an armed confrontation between the freewheeling womanizers of N.W.A and some rivals for the affections of the ladies they’re currently, er, entertaining in a hotel suite.

A more critical treatment of the ethically impoverished worldview that permeates the music it celebrates would have made this sometimes flavourful slice of pop culture history endorsable for at least a few mature viewers. And including a line or two of dialogue not weighed down with an obscenity would have helped as well.

Ricki and the Flash

NEW YORK (CNS) — Not even the storied talent of Meryl Streep can hold together the scattershot elements of the character study “Ricki and the Flash” (TriStar). 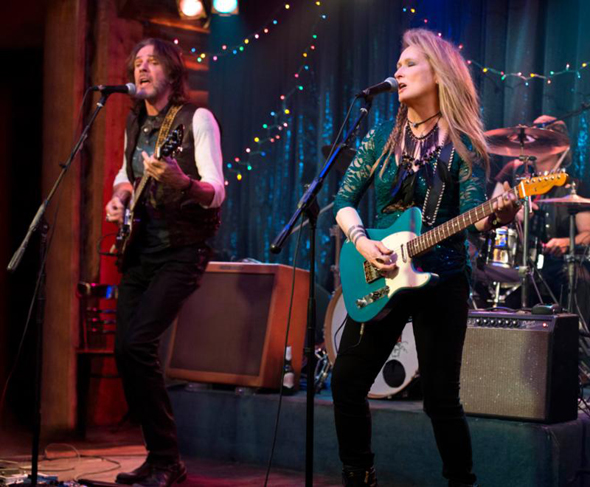 Rick Springfield and Meryl Streep star in a scene from the movie “Ricki and the Flash.” (CNS photo)

Despite the perennial Oscar nominee’s presence, director Jonathan Demme’s film veers disconcertingly between drama and romantic comedy. It also shifts unconvincingly from a realistic view of moral shortcomings to the illusion of simplistic solutions.

Though she seems content enough with her honky-tonk existence, Ricki is forced to confront the legacy of her own selfishness when her sympathetic ex-husband, Pete (Kevin Kline), summons her beck from L.A. to Indiana to help him cope with a family emergency.

Their daughter, Julie — portrayed by Streep’s real-life daughter, Mamie Gummer — has been thrown into a downward emotional spiral by the sudden desertion of her hubby, Max (Gabriel Ebert), who has thrown her over for another woman. Along with Julie’s difficulties, Ricki faces the enduring hostility of her two sons, Josh (Sebastian Stan) and Adam (Nick Westrate), as well as the no-nonsense truth telling of Pete’s second wife, Maureen (Audra McDonald).

While Springfield turns in a strong performance as Ricki’s ethical anchor, Streep feels uncomfortable in the character’s skin and is never really believable as a rocker. Diablo Cody’s disconnected script, moreover, fails to set. Instead, the geographically disparate parts of Ricki’s story feel like two largely unrelated narratives unfolding in a single movie.

The musical performances do serve to advance the plot in a few instances. But they more often come across as extraneous.

The screenplay takes an interesting approach with Ricki, making her a leather-wearing, free-spirited hippie who also holds at least some of the convictions of a conservative Republican. Thus she openly expresses her dislike of President Barack Obama and her admiration for the U.S. military. (Ricki’s brother, we learn, was killed in the Vietnam War.) Ricki also shows her discomfort with Adam’s homosexual lifestyle.

What degree of sympathy are we meant to feel for these opinions? As with the treatment of Ricki’s fundamental choice to forsake domestic life in favour of her dreams of musical greatness, the exploration is shallow and the evidence ambiguous.

In dealing with that central topic, Cody is unsparing in her portrayal of the long-lasting damage caused by Ricki’s disappearing act. Yet, not only do Greg’s dogged affections offer her fresh hope, viewers are also left with the distinct — and unsatisfying — impression that all the ruinous destruction Ricki left behind can ultimately be cleaned up with good intentions and a well-chosen song.

The film contains cohabitation, a nongraphic premarital bedroom scene, benignly viewed drug use, mature themes, including homosexuality, at least one use of profanity and several crude and crass terms. The Catholic News Service classification is A-III — adults. The Motion Picture Association of America rating is PG-13 — parents strongly cautioned. Some material may be inappropriate for children under 13.

Movie Review – The Perfect Guy / We Are Your Friends