NEW YORK (CNS) – In August 1974, just as the Watergate scandal was approaching its climax with the announcement that President Richard Nixon would resign, a very different news story was competing for headlines.

Joseph Gordon-Levitt stars in a scene from the movie “The Walk.” (CNS photo).

To the astonishment of onlookers – and that of the world at large – French high-wire artist Philippe Petit succeeded in walking across an improvised tightrope strung between the twin towers of New York’s World Trade Center.

The circumstances surrounding the 24-year-old’s signature achievement, which he aptly dubbed his “coup,” were recounted in Petit’s 2002 memoir, “To Reach the Clouds.” Having previously provided the basis for filmmaker James Marsh’s highly regarded 2008 documentary, “Man on Wire,” Petit’s book has now been charmingly dramatized as “The Walk” (TriStar).

Joseph Gordon-Levitt plays Petit, serving as both protagonist and narrator. In both capacities – for the latter purpose, he’s perched high above the city’s harbour on the torch-bearing arm of Lady Liberty – Gordon-Levitt draws viewers in with a charismatic combination of Gallic verve and Gotham-style gumption.

As the generally light-hearted narrative makes clear, that unusual combination of qualities was exactly what Petit would need to pull off his mad scheme. He would also benefit from the physical and psychological training – as well as the show-biz spiritual inspiration – supplied by his mentor, veteran circus performer “Papa” Rudy Omankowsky (Ben Kingsley).

Further support takes shape as Petit assembles an unlikely crew of co-conspirators to aid him in his secretive preparations. They include his live-in girlfriend Annie (Charlotte Le Bon), Jean-Louis (Clement Sibony), a photographer intent on documenting Petit’s feat, and Jean-Francois, aka “Jeff,” (Cesar Domboy), a laid-back hippie whose enthusiasm for Petit’s project is somewhat undercut by his fear of heights.

As Petit finally gets the chance to make his journey across the void, director and co-writer Robert Zemeckis marshals dazzling 3-D special effects to convey the acrobat’s giddy experience with almost overwhelming immediacy. While these scenes will likely thrill many grown-ups, they may leave others feeling unsettled, if not downright queasy.

Recommendation for younger moviegoers, however, is hindered by the un-vowed amour Petit and Annie share as well as by the script’s comic treatment of pot smoking. Though the later activity is shown to hobble the usefulness of two minor participants in Petit’s audacious plan, it’s otherwise portrayed as a harmless target for laughs.

As for a quirky interlude during which Petit briefly strips down to facilitate his pre-dawn search for the cable he’s about to traverse, it’s completely removed from any sexual context, discreetly dealt with, and – apparently – true to the facts.

The film contains cohabitation, benignly viewed drug use, fleeting rear nudity, about a half-dozen profanities and occasional crude and crass language. The Catholic News Service classification is A-III – adults. The Motion Picture Association of America rating is PG – parental guidance suggested. Some material may not be suitable for children.

NEW YORK (CNS) – A deadly game of cat-and-mouse plays out along the U.S.-Mexico border in the ultraviolent thriller “Sicario” (Lionsgate). This all-too-realistic film follows the ongoing war against drugs and the machinations of rival cartels willing to do anything – no matter how depraved – to gain supremacy. 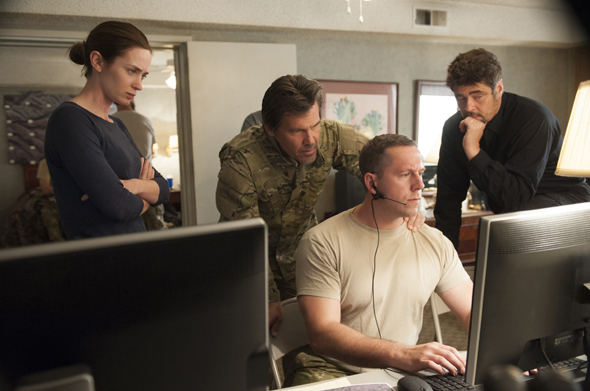 “Sicario” deals in harsh truths about greed, addiction, revenge and corruption. Unfortunately, although the movie is well-acted, its moral compass is skewed and its outlook excessively bleak. Caught in the crossfire of its Wild West-style shootouts, the audience is left to wonder just who the good guys are.

The picture’s title, at least, could hardly be more appropriate: In Mexico, a “sicario” is a hit man.

The action kicks off in Arizona where Kate Macer (Emily Blunt), an idealistic FBI agent, joins a raid on a suspected drug den. Dozens of mutilated bodies are uncovered – one cartel’s gruesome warning to turncoats.

Anxious to hunt down and help eliminate the anonymous gangster responsible for this slaughter, Kate volunteers for a black-ops mission south of the Rio Grande. Its leader is Matt Graver (Josh Brolin), a gleeful if enigmatic fellow agent whose stated objective is “to dramatically overreact.” Translation: C’mon, get trigger-happy.

Matt’s main collaborator is an even more mysterious figure, Alejandro (Benicio Del Toro). Though he’s a former prosecutor from Colombia, it’s unclear whether Alejandro is currently friend or foe, ally or assassin.

As the operatives dig in, and Kate witnesses’ random rub-outs, abductions, and torture, her doubts grow. Alejandro, on the other hand, insists the normal rules don’t apply.

“Nothing will make sense to your American ears, and you will doubt everything we do,” he proclaims. “But in the end you will say, ‘Those guys were right.'”

Moral uncertainty haunts “Sicario,” as director Denis Villeneuve (“Prisoners”) raises the body count on both sides of the frontier.