Why Split Family from Laity?

Even well-balanced adult parents might have had some difficulty keeping afloat in the sea of reports emanating from the Synod on the Family. 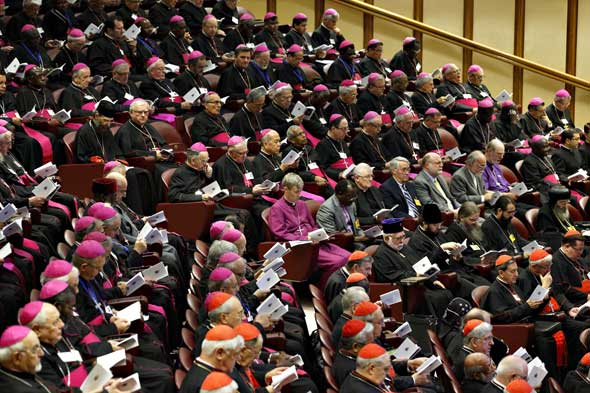 Cardinals, bishops and other delegates attend a session of the Synod of Bishops on the Family. (Photo: Paul Haring/CNS)

A meeting of 300 people reflecting and debating over a document that they all have had a chance to study well beforehand would rather make the mind boggle in the secular domain.

It was an anomaly that although marriage is of decreasing interest, almost all the lay people present at the synod were married couples. What about never-marrieds, single parents, widows, separated men and women, many divorcees who are not in conflict with Church positions and also those who are? There are countries where the number of unmarried adults now exceeds that of married adults.

In the course of my ministry I have strongly promoted the notion that a diversity of families exists in society. This was one of the four elements of the US Catholic Bishops’ “Family Perspective in Church and Society” of 1994, which formed the foundation of Marfam’s original vision.

This document, produced after decade-long research in the US, contained a vision statement on the family which includes a description derived from St John Paul II’s Familiaris Consortio (1981): “A family is an intimate community of life and love bonded together for life by blood, marriage or adoption.” I have used this description and had some influence on its edited inclusion in the SA White Paper on Families.

The tasks of a family are, firstly, to form its own intimate community with the above mentioned qualities. Secondly, to support and nurture life from conception to natural death. Thirdly, to be active, a leaven in society. Fourthly, to participate in the life and mission of the Church.

These are some fairly clear indicators of what families can and should be doing, as laity, in the Church and the world.

The role of the laity as a body continues to appear to me to be undervalued in all the current goings-on. In my years at the SACBC Family Life Desk with Mgr Barney McAleer, we dedicated time to promoting the concept of the priesthood of the laity, an idea put forward for consideration by Archbishop Buti Tlhagale at the time.

In Christefidelis Laici, Pope John Paul II wrote one of my favourite passages: “For all their works, prayers and apostolic undertakings, family and married life, daily work, relaxation of mind and body if they are accomplished in the Spirit, even the hardships of life if patiently borne, become spiritual sacrifices acceptable to God through Jesus Christ. In the Eucharist these may most fittingly be offered to the Father along with the body of the Lord. And so, worshipping everywhere by their holy actions the laity consecrate the world itself to God.”

Similarly, the prophetic and kingly callings of the laity are important, but particularly collaboration and partnership matter. I have always found it sad that the role of the laity is separated from family life which then tends to become much narrower.

The Vatican has two separate pontifical councils for laity and family life. Surely the laity are family people and bring not only their individual gifts and aspirations but particularly their marital and family experience which is inherent in their lives.

A good outcome of the synod would be a greater family focus in the Church in general with a combination and acceptance of the contribution that laity make quite naturally as family people. Support from hierarchy and clergy is needed in this.

Yes, laity need formation, but it should be contextual. Yes, marriage as a sacrament needs much deeper preparation but where does it fit into our ongoing adult formation programmes? Do laity themselves request this or avail themselves where it does exist in order to qualify themselves for their Mission in the Church?

November’s family theme focuses on “Loss and Commitment” to those experiencing loss of various kinds. There is even loss of credibility and a degree of influence when “Becoming Widowed”, as I share in reflections in the booklet by that name published by the Redemptorists.

A growing family-friendly Church needs active involvement from a wide range of lay family people, dealing with practical issues but also a spirituality of the ordinary events of their daily lives—children, time, work, wealth or poverty, friends and issues of sex and sexuality. Where and how?

Marfam’s vision would be to build up the Church of the home, where families could both pray and play, eat and meet, fight and heal.

Incidentally, 2016 is the 3rd year of the SACBC Focus on Families. For the 2016 Family Year Planner produced by Marfam and accompanying materials on the themes for the “Jubilee Year of Mercy and the Family”, contact me on 082 552-1275 or info@marfam.org.za or www.marfam.org.za

We are all Family

I have been thinking a lot about the concept of family recently. Not just because it had been preoccupying 300...