What Makes Pope Francis So Special?

Pope Francis has taken the world by storm. Despite much of the conflict and intolerance that made headlines lately, the majority of people throughout the world are able to express and practise their religious and faith beliefs freely. 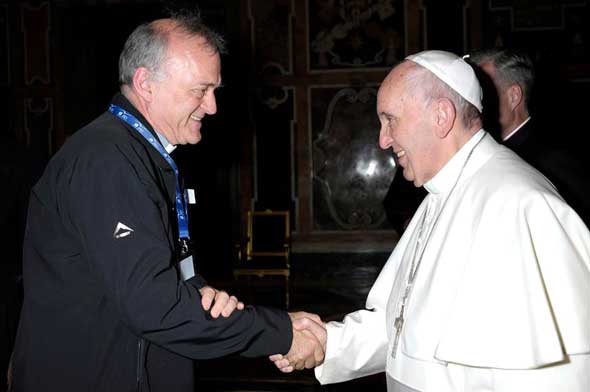 Many faiths and systems of belief exist across the world, all with various religious leaders providing guidance for their congregants. However, Pope Francis in particular has taken the world by storm. His message, humility and words appeal to a global audience, wherever they live, what they believe or how rich or poor they may be.

Fr David Holdcroft SJ, the regional director of Jesuit Refugee Service (JRS) Southern Africa (my employers), was fortunate enough to meet the pope at the Vatican.

He best describes why Pope Francis has such an immense impact: “He has a very ‘alive’ face. It is transparent; it is as if he couldn’t tell a lie. The whole thing—the Church and his message beyond the Church—hangs on a thread, so fragile, so human. He is human and shows such great, humble leadership, powerful, yet so fragile.”

The pope’s humility and his message regarding social justice are his hallmarks. These hallmarks have made him accessible not only to ordinary, lay-Catholics, but to ordinary people of different beliefs across the world. This has bestowed upon Pope Francis a sense of celebrity that has been colloquially referred to as having “rockstar status”, and yet he behaves completely contrary to this status that has been afforded him.

Fr Holdcroft’s meeting with the pope on November 14 marked the 35th anniversary of Jesuit Refugee Service’s founding by Fr Pedro Arrupe, then superior-general of the Society of Jesus. To mark this anniversary, 125 JRS friends and staff, including 15 refugees served by JRS in Italy, attended an audience with Pope Francis.

At the event, Pope Francis pledged his support for the JRS Global Education Initiative, which is entitled “Mercy in Motion”—a global response as part of the Jubilee Year of Mercy—committed to increase the number of people served by JRS educational programmes by 100000 in 2020.

It is estimated that 167 million children across the world have no access to education. Among these children are a large number of refugees, asylum seekers and displaced persons.

In his address to his JRS audience in the Clementine Hall, Pope Francis said on the issue of migration: “The phenomenon of forced migration has dramatically increased in the meantime. Crowds of refugees are leaving different countries of the Middle East, Africa and Asia, to seek refuge in Europe.”

The United Nations High Commissioner for Refugees has estimated that there are, worldwide, almost 60 million refugees, the highest number since the Second World War.

“Behind these statistics are people, each of them with a name, a face, a story, an inalienable dignity which is each of theirs as a child of God,” said the pope.

JRS’s work in the area of education in particular found Pope Francis’ favour, hence his full support of the ”Mercy in Motion” initiative: “The Jesuit Refugee Service works to offer hope and prospects to refugees, mainly through the educational services you provide, which reach large numbers of people and are of particular importance. Offering an education is about much more than dispensing concepts. It is something which provides refugees with the wherewithal to progress beyond survival, to keep alive the flame of hope, to believe in the future and to make plans.

“All your projects have this ultimate aim: to help refugees to grow in self-confidence, to realise their highest inherent potential and to be able to defend their rights as individuals and communities.”

Pope Francis concluded his address in his customary manner: “As for me, I assure you of my prayers. I ask you also, please, do not forget to pray for me.”

When he had the opportunity to meet Pope Francis one-on-one, Fr Holdcroft thanked the pontiff for his leadership in this area, and asked him to pray for the refugees and the work being done to aid displaced people in Southern Africa. Smiling, Pope Francis assured him of his prayers—and, again, humbly asked that we pray for him.

The phenomenon that is Pope Francis emanates from one simple fact, the pontiff truly cares for the marginalised.

Whether it be people affected by war and conflict, marginalised as a societal minority, left hungry or displaced due to global climate change or the refugees and displaced people JRS works with; one irrefutable truth rings out: Pope Francis sincerely cares and believes that the world could be a better place.

Pope: The Holy Spirit is in Control of the Church