Nazareth, where the Story of the Incarnation Begins

The story of the Saviour’s incarnation begins in Nazareth, and that of his active ministry with the miracle at the wedding feast in Cana. In the first part of his series on the recent Pilgrimage of the Peacemakers, GÜNTHER SIMMERMACHER reflects on those two towns in Galilee.

We know their faces from countless works of art and icons, and yet we don’t know what Mary or Joseph or the disciples really looked like.

I believe that we have a good idea of Jesus’ real face: the physiognomy of the face on the Shroud of Turin and the 6th-century icon of Christ Pantocrator, on which so many images of Christ are based, match up perfectly. If one believes that the Shroud is that of Jesus — which in my view is very likely — then we can imagine his human face (see my article from last year for more on that).

But what about his blessed mother, the teenage girl from Nazareth? We can see her face in any number of the Palestinian girls we encounter today on the streets of Nazareth or Cana or Bethlehem. 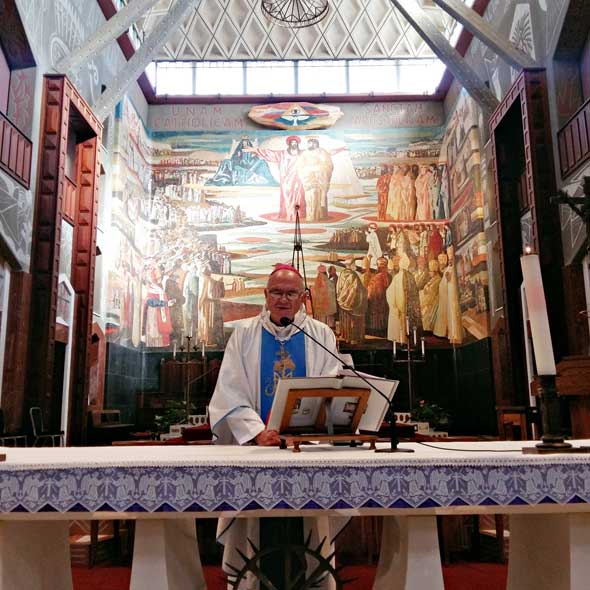 Archbishop Stephen Brislin at Mass in the upper basilica of the Annunciation, which also serves as the parish church of Nazareth’s Christians.

The Palestinians are the indigenous people of the Holy Land. Today most of them are Muslims — the Christian proportion has shrunk dramatically in the past hundred years, mostly because of emigration. But before the Islamic conquest of 637 the Palestinians were Christians, and before that they were Jews, much as Italians were first pagans, then became Christians.

The forced removal of Palestinians from their ancestral land that accompanied the founding of Israel in 1948 dramatically changed the distribution of the Holy Land’s original people, and with the mushrooming of the illegal settlements built by Israel in the occupied territories, it keeps changing.

The actions of one man ensured that we can still see the face of Mary in Nazareth, the place where the story of the incarnation begins.

In 1948 the Israeli government under President David Ben Gurion had ordered the removal of all inhabitants from Nazareth, then a predominantly Christian Arab town. But the commander of Israel’s Seventh Armoured Brigade charged with the expulsion of the city’s population, an Israeli-Canadian named Ben Dunkelman, refused to do so, on account of it being a Christian city.

Previously Dunkelman had participated in the ethnic cleansing of other towns and villages. His own accounts of that campaign, long suppressed by the Israeli army, are harrowing, involving war crimes such as firing “concentrated mortar barrages” into non-combatant civilian areas and looting by soldiers.

In one village, Saliha, his troops forced 60-90 people into a building, probably the mosque, and then blew it up, killing all inside it. In nearby Safsaf the Seventh Brigade shot dead 50-70 people and threw their bodies down the well. In Jish more massacres were committed, including that of four Christians, and a woman and her baby.

Not surprisingly the residents of other villages fled before the Seventh Brigade (and other such outfits) could arrive. Their flight of fear then gave rise to the myth that the Arabs of Palestine left their villages voluntarily.

In Saffuriya, a Muslim village near Nazareth—on the site of the ancient Sepphoris, which will be mentioned again in a moment — Dunkelman’s brigade dropped barrel bombs on the village just as residents were breaking that day’s Ramadan fast

In short order, all inhabitants were driven out, and their homes razed. They were never permitted to return, even to tend to the graveyard that holds the remains of their ancestors.

The Southern Cross’ Pilgrimage of the Peacemakers, which travelled to the Holy Land with Archbishop Stephen Brislin in February, drove through the area. As in Cape Town’s razed District Six, one can see the rubble of ethnically-cleansed homes. Lines of cacti show the old demarcations of the properties on which these houses once stood.

So it is no wonder that the people of Nazareth were grateful when Dunkelman offered them a surrender, rather than enforced exile. The price they paid was the city’s forcible annexation into the state of Israel, against all international agreements and laws.

And so Nazareth was spared the fate of previously Arab cities that were given no such choice, such as Tiberias, Jaffa, Ein Kerem, Lydd, Ramleh, Acre, Baysan, Haifa and so on, places from where hundreds of thousands of Palestinian residents were driven by violence or the threat thereof. (More on Dunkelman and the 1948 war here)

These displaced people and their descendants still live in refugee camps, in Palestine, Lebanon and Jordan. 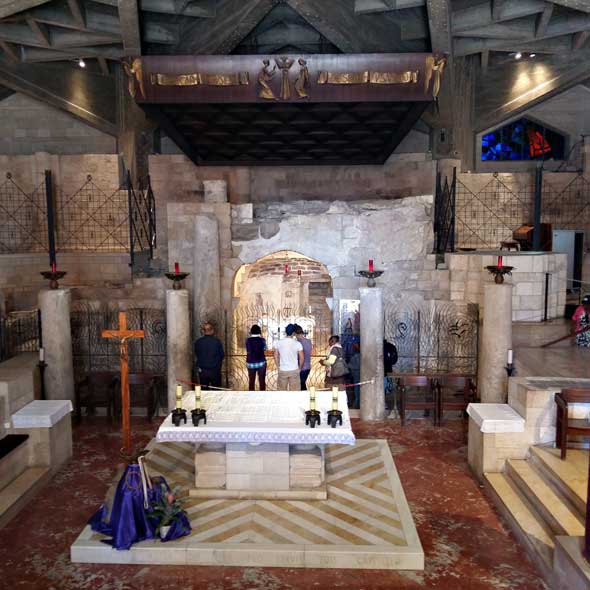 Pilgrims look into Mary’s grotto, traditionally held to be her home, in Nazareth’s lower basilica of the Annunciation

Today Nazareth is a bustling city of 75000, of whom 30% are Christians. It is dominated by a main road that is named after Pope Paul VI, the first modern pope to visit the Holy Land, and the imposing basilica of the Annunciation.

Our group had Mass in the upper level of the basilica, which the local Palestinian Catholics use as their parish church.

In the lower level, or crypt, is the grotto of Mary, the place where the Annunciation took place (though the Greek Orthodox argue that it happened at the city’s well, where they built St Gabriel’s church).

In 380 AD the Iberian pilgrim Egeria, whose accounts are considered perfectly reliable, reported having been shown the cave where Mary lived.

The Christians, who have had an unbroken presence in Nazareth since apostolic times, obviously remembered through the generations the places associated with the Holy Family, and showed them to pilgrims from the earliest times.

Archaeologists have even found graffiti to support the early Christian presence and pilgrims’ veneration of Mary there. Indeed, the oldest known graffito to mention Our Lady was found here.

Next to the basilica a first-century domestic residence was found in 2009. The set-up of that house was typical of homes throughout the Holy Land: a dwelling would be attached to the front of a cave. Families would keep their animals in the caves, and live out in the front structure. 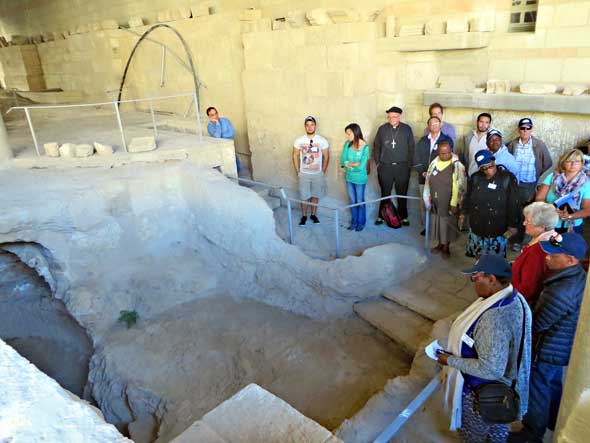 The first-century house in Nazareth, with the front area that was covered by a structure and a cave at the back

The excavated house shows how the Nativity story we know, with no rooms at the inn and wooden stables, is the result of Western imagination.

For one thing, at the time there were no “hotels” in Bethlehem which might put up “No Vacancy” signs. More likely, there was no room for Mary and Joseph in the front of the house — an area that served as kitchen, living area and, at night, bedroom. So Mary and Joseph were accommodated in the back area: the cave, where the animals were being kept.

So Jesus was born in a stable, but a cave, not a wooden edifice. Either way, it was a very humble birth.

And nine months before that birth, there was the Annunciation, the feast of which we mark on March 25.

But if Joseph was from Bethlehem, and Mary from Jerusalem, what were they doing in Nazareth?

Our Roman Catholic guide, the learned Rimon Makhlouf, proposes that they had moved from Judea to the Galilean village for two reasons: firstly to escape the tyranny of King Herod, and secondly to find work in the nearby city of Sepphoris, which was being built at the time.

We know that St Joseph was an artisanal builder — the gospels of Mark and Matthew describes him and Jesus by the Greek word tekton, which means craftsman. Most probably they were stonemasons, not carpenters (another Eurocentric misconception). So it makes eminent sense that a builder such as St Joseph would migrate to a place where work is needed.

And why was the teenage Mary there? She might have come from Jerusalem, where she was born, to Nazareth with her family, perhaps also in search of work in Sepphoris. Perhaps her parents, who were already old when she was born, had died by then and she came with an uncle and his family. This would explain why Mary did not have to justify her mysterious pregnancy to an angry father.

Modern reliefs between the basilica of the Annunciation and St Joseph’s church depict (left) the Annunciation by the Archangel Gabriel and (right) a domestic scene of the Holy Family with Jesus as a toddler.

As we know, that pregnancy changed the world. And just as Mary gave life to the Saviour in around 4 BC, so she launched his ministry some three decades later.

The place was Cana, a town just around the corner from Nazareth. Married pilgrims today renew their wedding vows in the lovely Franciscan church there.

We know the story: a wedding feast — then three-day affairs — has run out of wine. Mary has compassion for the embarrassed hosts and asks her Son to fix the problem. But Jesus is reluctant. “My hour has not yet come,” he tells his mother, who obviously has known his nature from the moment of the Annunciation back in Nazareth.

Is Jesus working on some sort of schedule which governs when his hour should come? No, his protest is much more emotional. He knows that in beginning his ministry he will inaugurate the chain of events that will lead to his gruesome death. He wants to delay the inevitable, if at all possible (as he does again, hours before his crucifixion, in the Garden of Gethsemane).

Mary also knows what she is asking. She knows the prophecy of her Son’s fate. At the Presentation in the Temple, Simeon had told her that “a sword will pierce your own soul, too, so that the inner thoughts of many people might be revealed” (Lk 2:32).

Mary knows that her request marks the beginning of that terrible end. And yet, she instructs her obedient Son. And so Mary’s act of mercy for the hapless wedding hosts comes at a grave, ultimately heartbreaking sacrifice.

Next: Finding Jesus in the Holy Land

Join The Southern Cross’ Year of Mercy pilgrimage to the Holy Land and Cairo in October 2016, led by Fr Larry Kaufmann CSsR, the popular mission priest. For more info go to www.fowlertours.co.za/kaufmann 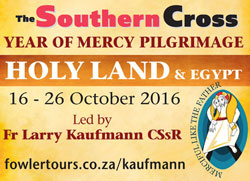 St Maximilian Kolbe, a Polish priest who was murdered by the Nazis, is one of the three patrons of The...