By David Agren – A Catholic bishop in the southern Mexican state of Guerrero has called for compassion toward the impoverished populations harvesting opium poppies out of necessity, saying such people are not sinners and are neglected by the government. 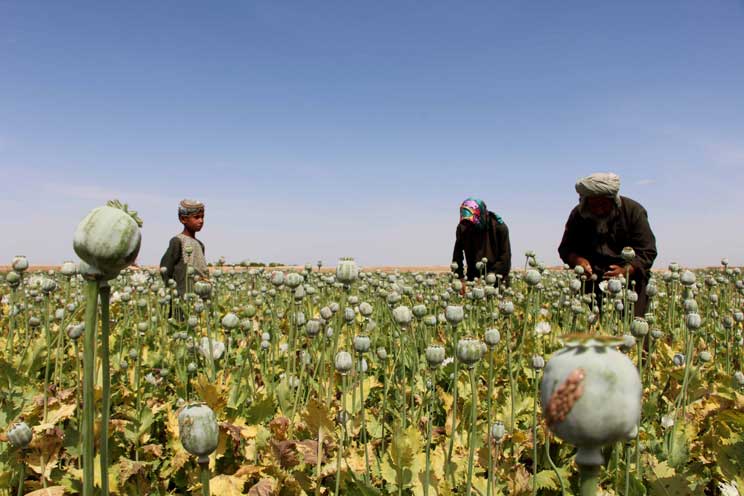 Afghan farmers extract opium to be processed into heroin in Helmand province, Afghanistan. A Catholic bishop in southern Mexican has called for compassion toward the impoverished populations harvesting opium poppies out of necessity, saying such people are not sinners and are neglected by the government. (CNS photo/Watan Yar, EPA)

He asked the army to stop fumigating small farmers’ poppy fields “until there are other options for opium poppy growers” and said the practice was “taking food out of their mouths (and) starving them to death.”

“People who grow opium poppies are the most marginalised people in the state and the country. … It’s campesinos (peasant farmers) who plant the flower, not narcotics traffickers,” Bishop Salvador Rangel Mendoza of Chilpancingo-Chilapa told the newspaper El Universal. “Those that plant (opium poppies) are somewhat enslaved, receiving a minimal benefit, and they grow it to get by. … The Church must not condemn it because the majority of people (growing poppies) do it because of a lack of options.”

Priests in drug-producing Mexican states often confront the realities of local people growing illegal cash crops such as marijuana and opium poppies to put food on the table. Bishop Rangel made his comments as violence consumed the state of Guerrero, which lies south of Mexico City and includes some of the country’s most marginalised municipalities.

The state is still reeling from the attack on 43 students by police in 2014 as they commandeered buses to travel to protest in Mexico City. One of the buses may have been transporting opium paste, provoking the attack. Experts from the Inter-American Commission on Human Rights, who reviewed the case, called on Mexican investigators to probe that angle.

For decades, Guerrero has been coveted as a trafficking corridor and a site for planting and harvesting opium poppies. Increased heroin use in the United States is believed to be driving a demand for opium poppies produced in Mexico, which are processed into paste and smuggled to the United States.

“Growing is nothing new,” said Father Mario Campos, a priest in the Diocese of Tlapa, which serves the marginalised La Montana region, populated by isolated and impoverished indigenous communities sustained by illegal cash crops and remittances.

“The problem is not the growing of opium poppies,” Father Campos said. “The problem is unemployment. People have to work. They need economic resources so that their children go to school. They need income to buy the basics.”

Guerrero Gov. Hector Astudillo is floating the idea of decriminalizing some poppy production and selling the crop to the pharmaceutical industry for medicinal purposes as a way of reducing violence among the criminal groups buying and processing opium poppies.

Antonio Mazzitelli, the U.N. Office on Drugs and Crime representative in Mexico, told the Associated Press that demand was lacking to justify producing more opium poppies.

“If the government invested a little more in the Sierra … and paid closer attention to education, invested in highway infrastructure, health centres and hospitals, it would be different,” he said.

Jesus is compassionate toward people and their imperfections without ever compromising the truth, Pope Francis said at his morning Mass. ...