European funding for Catholic aid agencies based in the U.K. could be withdrawn if the British people vote to leave the EU in late June, said an English bishop. 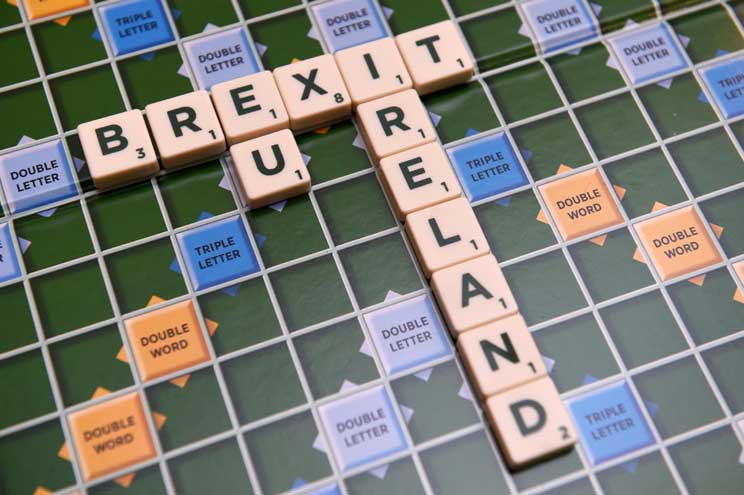 A scrabble board spells out “Brexit” in Dublin May 4. An English bishop said groups such as CAFOD, the overseas aid agency of the Catholic Church in England and Wales, and SCIAF, the Scottish Catholic International Aid Fund, could lose grants following a “Brexit” victory in a referendum June 23. (CNS photo/Clodagh Kilcoyne, Reuters)

Auxiliary Bishop William Kenney of Birmingham said groups such as CAFOD, the overseas aid agency of the Catholic Church in England and Wales, and SCIAF, the Scottish Catholic International Aid Fund, would lose grants following a “Brexit” victory in a referendum June 23.

“Caritas Europa, to the best of my knowledge, always negotiates for funding from the EU, and the U.K., should it decide to leave, will be outside of that, and it won’t get any of that (money) any longer,” he told Catholic News Service in a May 28 telephone interview.

“In that sense it would no doubt affect CAFOD and others, but to what extent I don’t know,” said Bishop Kenney, spokesman for European affairs of the Bishops’ Conference of England and Wales and a former president of Caritas Europa.

Representatives of CAFOD and SCIAF told CNS by telephone that they were taking neutral positions on the referendum. They would not comment on the possible impact on funding in the result of a Brexit win.

Bishop Kenney’s comments came after Caritas Europa called on European governments to “strengthen the role” of the Council of Europe, the organization with the responsibility of harmonising human rights laws across the continent.

Caritas wants the council, which has power to enforce the European Convention on Human Rights through the European Court of Human Rights, to ensure the “social rights” of citizens, including “the right to be protected against poverty and social exclusion.”

The loss of sovereignty through the transfer of powers from individual governments to the largely unaccountable institutions of the EU has been one of the factors that has forced the British government to concede a referendum on continuing membership of the bloc, however.

Mass migration into the U.K. from both within and outside of the European Union has also been an issue of major concern to voters — with net migration to the U.K. running to at least 330,000 people a year.

Many Britons fear the threat of terror attacks by extremist groups coupled with an apparent inability to control the nation’s borders.

Supporters of the campaign to remain in the European Union, who include the prime minister and the leaders of other major political parties, argue that a victory for Brexit would spell economic ruin for Britain.

READ  Bring People in with Shared Cups of Tea

Recent opinion polls have nevertheless indicated that a small majority of British voters will elect to leave the EU after more than four decades of membership.

The English and Welsh bishops have been careful not to direct the electorate how to vote, but in a statement after their Easter meeting, they reminded Catholics that “the referendum will have consequences for the future not only of the United Kingdom, but for Europe and for the world.”

Speaking individually, the bishops have revealed a wide range of opinions even among themselves.

Cardinal Vincent Nichols of Westminster, president of the bishops’ conference, told journalists that the U.K. would face “complex problems” if it left the EU and that the path to division “almost inevitably leads to further division.”

His predecessor, Cardinal Cormac Murphy-O’Connor, went further by arguing a robust case for remaining in Europe in an article for the Spectator magazine.

In his interview with CNS, Bishop Kenney said that he would prefer the U.K. to remain in a reformed European Union.

“The EU is very much in need of reform, but we have got to reform every organization from the inside; you will never reform it from outside,” said Bishop Kenney, who also serves as the English bishops’ representative on COMECE, the Commission of the Bishops’ Conferences of the European Community.

“Yes, we need reform, and secondly we need to stay there to be part of that reform,” he said.

It would be wrong for Catholics to leave just to close its borders to migrants, added Bishop Kenney, who about a decade ago helped to retrieve the bodies of drowned migrants from beaches in Spain.

“Obviously, there are Catholics who no doubt will be voting to leave, and I hope and presume that they have good reason to,” he said.

Archbishop Peter Smith of Southwark, vice president of the Bishops’ Conference of England and Wales, was more sympathetic to “Euro-skeptic” Catholics.

In an interview with Vatican Radio in late May, the archbishop defended British sovereignty and he criticized as “ludicrous” the claims of leading politicians that the U.K.’s economy would fail following a Brexit win.

“The problem is that the EU has become extremely bureaucratic,” he said. “With this real fundamental desire to become more integrated, like a European (United) States — that, many of us find hard to swallow. I don’t think that is the right thing to do.”

Archbishop Smith also pointed out that the euro, the single currency used by most member states but not by Britain, had failed “the poorer countries in Europe — Greece, Portugal, Spain to an extent.”

“All of us are glad that we didn’t go into the euro,” he said. By Simon Caldwell Catholic News Service