Just With Our Naked Heart…

While the prayer of a proud person isn’t strong enough to reach God’s heart, the prayer of a humble and contrite heart is capable of opening wide the door to his mercy and love. 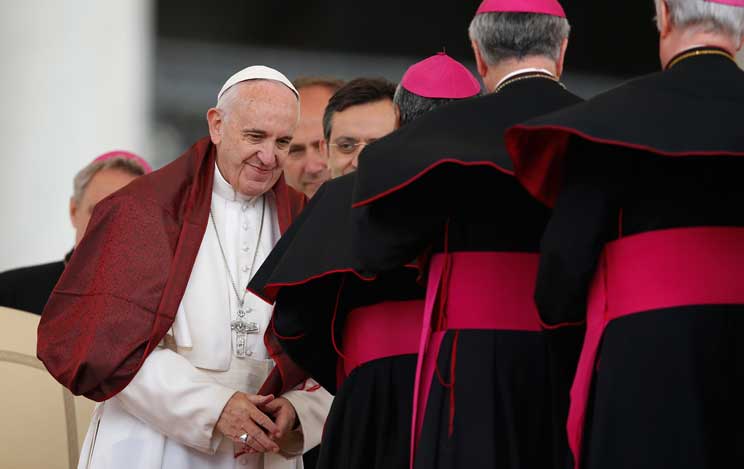 Pope Francis wears a cape given by a bishop as he greets prelates during his general audience in St. Peter’s Square at the Vatican. (CNS photo/Paul Haring)

God has one weakness: He has a weakness for the humble ones. In front of a humble heart, God opens his heart fully,” the pope said June 1 during his weekly general audience in St. Peter’s Square.

The pope continued his catechetical series on prayer, focusing on Jesus’ parable of the Pharisee, who prayed with arrogance of his own assumed righteousness, and the tax collector, who would “not even raise his eyes to heaven but beat his breast and prayed, ‘O God, be merciful to me a sinner.'”

The Pharisee “prayed to himself,” and his prayer was a display of his own merits and sense of superiority disguised as a “prayer of thanksgiving toward God,” the pope said.

“Instead of having the Lord in front of his eyes, he had a mirror,” he said. “His attitude and his words are far from the way to act and speak to God, who loves all men and women and does not reject the sinner. This one rejects the sinner; he even points to the (tax collector) who was there.”

Jesus’ parable, he continued, is a reminder for all Christians that it is not enough to “ask ourselves how much we pray, but we must also ask ourselves how we pray.” Although life may run at a frantic pace, the tax collector’s humble prayer shows “the value of intimacy and silence” which “allows God to meet us and speak to us.”

After inviting the 15,000 pilgrims gathered in the square to recite the tax collector’s prayer three times, Pope Francis told them the parable teaches the valuable lesson that a person is determined to be just or a sinner not by their social standing, but by his or her relationship with God and neighbour.

As the tax collector is an image of a true believer, he added, so is the Pharisee an “image of the corrupt one who pretends to pray” and in exulting his own good deeds delivers an empty prayer that distances him from God and from others.

“If God prefers humility, it is not to debase ourselves. Humility is rather the necessary condition in order to be raised up by him so as to experience the mercy that comes to fill our emptiness,” the pope said. By By Junno Arocho Esteves, CNS