With God on the Football Pitch

At the press conference after he had led Portugal to the European Championship in France this month, coach Fernando Santos paid a lovely tribute to Christ and the Blessed Virgin. 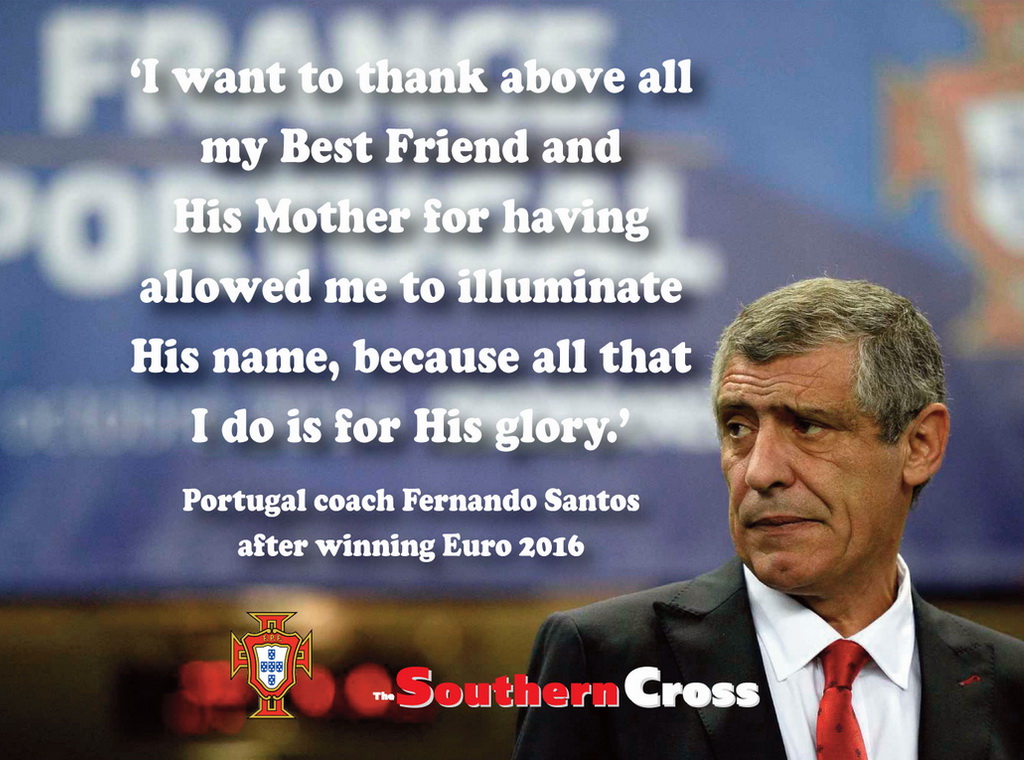 “I want to thank above all my best friend and his mother for making me so humble, for having allowed me to illuminate his name, because all that I do is for his glory,” the Portuguese coach told the assembled journalists, after having highlighted the support of his family.

In the Anglophone world we are rather used to the media treating public displays of faith with suspicion, if not mocking scorn. England striker Daniel Sturridge, a committed Christian who prays on the pitch, often attracts comments of ridicule, especially if he misses good chances. His captain in the national team, Wayne Rooney, is a Catholic. When his team prepared for the 2010 World Cup in South Africa he was photographed wearing a rosary around the neck. That made front-page news in Britain!

Rooney hasn’t talked much about his faith since then, perhaps mindful that Britain does not “do God”.

That certainly isn’t the case in Portugal, Spain, Italy or Latin America, where football players are open and demonstrative about their faith. It is common to see players from those regions — and also from places such as Croatia and Poland — crossing themselves before, during and after matches.

Some, like Brazil’s Oscar or Mexico’s Javier Hernandez, even kneel in prayer before games.

Barcelona’s Argentinian star Lionel Messi, the world’s second-best player, has described meeting Pope Francis as one of his life’s highlights. A practising Catholic, he reportedly made a pilgrimage to Medjugorje.

German players, it is fair to say, aren’t as demonstrative. And after recent reports showed just how much the Christian churches are in decline there, one might think that this creeping lack of faith applies also to the players. But apparently that is not so. Of the team that won the 2014 World Cup in Brazil, most have some measure of religion. The most visible example of that is midfielder Mesut Özil, a practising Muslim of Turkish heritage who prays on the pitch (Sami Khedira, who is half-Tunisian, also practises Islam).

But Mario Götze, who scored the winning goal in the final, is an active Christian who posts religious messages on his Twitter account. And the now-retired captain, Philipp Lahm, is a Protestant who is engaged in ecumenical activities.

Now retired striker Miroslav Klose, the record holder for most-ever World Cup goals, has described himself as a devout Catholic for whom the faith forms the pillar of family life. Fellow striker Lukas Podolski — who, like Klose, was born in Poland — is also Catholic, and a particular fan of St John Paul II.

Another striker, Mario Gomez, makes regular pilgrimages with his family to a Marian shrine on the Bussen mountain in southern Germany.

Attacking player Thomas Müller and coach Joachim Löw both were even altar servers when they were younger. Though neither is a devout Catholic today, both have said that they see the faith and Church as playing an important positive role in society.

I don’t know what church Jerome Boateng belongs to, but he has several Christian tattoos, including one of the Blessed Virgin on his left arm and the cross on the right.

It would be silly to argue, of course, that teams with many players of faith have an advantage over those whose squads are lacking in religious beliefs. In international football, it is talent, coaching and infrastructure (as well as a bit of luck) that determines success.

But I’ll leave you with this thought: other than Germany and England, all World Cups have been won by countries with a strong Catholic majority: Spain, Italy, France, Argentina, Uruguay and, of course, Brazil. And when Germany won the trophy in 1954 and 1974, most players came from Catholic backgrounds (I don’t know about 1990, but most of the 2014 team were practising Christians).

The Prayer of Stopping: Just be