Priest with a Passion for the Good News

Stigmatine Father Paul Tatu, the bishops social communications officer, has a passion for the new evangelisation work of bringing the Gospel to all people in Southern Africa. He spoke to Mandla Zibi 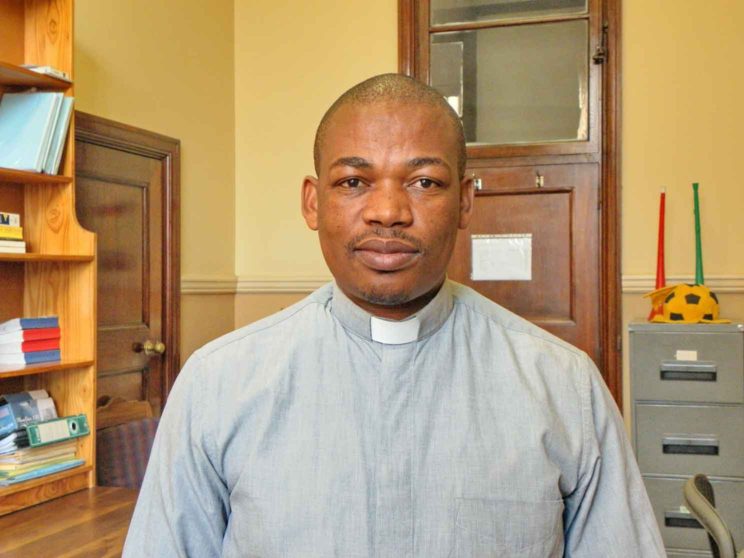 Stigmatine Father Paul Tatu is the social communications officer for the SACBC.

Some time during his training for the ministry, Stigmatine Father Mothobi Paul Tatu took a year off from his order to live with miners in the Free State. He so enjoyed the interlude that he struggled to come back—but eventually he did and the miners’ loss became the Church’s gain.

“After my novitiate in 2003 I asked for leave of one year outside of the order. I had a wonderful experience working with the miners in Welkom in the Free State where I was much engaged in development programmes with them, and experiencing their life. I was living among them, going through all the challenges they were facing,” recalled Fr Tatu, who earlier this became the new communication officer of the Southern African Catholic Bishops’ Conference (SACBC).

“A year later I had to separate from the mining industry and leave people who had become my new family. I had a special love for them, but I had to cut the cord between us. It was not easy but I had to pursue another side of life, especially what I had already started.”

Fr Tatu was born in Lesotho in 1979. In 1998 he joined the Congregation of Sacred Stigmata of Our Lord Jesus Christ, known as the Stigmatines, as part of the orientation programme.

From 1999 to 2000 he did his philosophical studies at St Francis House of Studies in Pretoria. Towards the end of his studies there he was accepted as a postulant, and the following year moved to Botswana for his novitiate.

Having completed this stage of his training, the young man decided to take stock of his life and headed for the Free State and a year of living with miners.

He was so determined to help empower them that in order to be truly part of them he did some short courses in mining and steeped himself in the language and culture of the mining industry.

“I was so dedicated to them and I really helped many of them. I enjoyed being a teacher of mining theory; setting theory; English and other subjects. It was really a fulfilling experience. I also wished to address some of the painful mining industry challenges which affected them,” Fr Tatu told The Southern Cross.

But eventually his priestly calling could no longer be kept waiting.

“I came to believe strongly that God was calling me to be a missionary in his Church. In 2004 I went back to the seminary under the formation of the Stigmatines. Towards the end of 2007 I completed my theological studies at St John Vianney Seminary in Pretoria.”

Still on probation, Fr Tatu worked in various Ga-Rankuwa parishes, including Mmakau, Mothutlung and Brits, before being briefly transferred to Tanzania, coming back later in the year for his priestly ordination.

After a year as a priest he was again sent to Tanzania where he spent five years with the Stigmatines.

“It was during this time that my love for communication came to the fore. I undertook communications studies with St Augustine University of Tanzania. It was a struggle but I managed to finish my studies. When I completed my mass communication studies in 2014, I was transferred back to South Africa in Pretoria.”

This eventually brought him to Khanya House, the Pretoria headquarters of the SACBC, and his current job as the go-to communications man for the bishops.

“Social communications is one of the most important tools for the New Evangelisation. With dedication, cooperation and willing hearts of all in the Church, I believe we can succeed in bringing the Gospel to the people of Southern Africa. I believe very much that mass communication is one of the best tools for carrying the Gospel to the furthest corners of our societies,” the priest said.

“The management staff of the bishops’ conference and all my colleagues in the SACBC have been patient in introducing me to the culture of the institution, and other stakeholders of the SACBC have shown their support. On pilgrimages of this nature one definitely never walks alone,” he said.

“It is my wish that we become, as with other local Catholic media houses, a community modelled on the first disciples of Jesus Christ — to cooperate humbly with one purpose of taking the Gospel to all corners of South Africa.”

To emphasise the immense value of a collaborative approach to his work, Fr Tatu gave the example of a Sotho proverb: Lehlanya lea bokaneloa, meaning that in order to tie up a mad person you have to call other people for help; alone it is just impossible and even dangerous.

As for the challenges ahead, the priest sees them not as his alone but as part of the life of the Church as a whole.

“The Church in Southern Africa, like the Church around the globe, is aware of the indispensable need of tightening the loosed strings in proclaiming the Gospel,” he said.

“I am definitely happy to be a partner in the vision of the Church focusing on New Evangelisation.  There is no doubt that communication is part and parcel of the life of the Church in the world of today, and the Church herself has realised that,” Fr Tatu said.