Apostleship of the Sea offers Vital Support to World’s Sailors

The Apostleship of the Sea (AoS), a Catholic ministry which is active in South Africa and worldwide, is always ready to support seafarers in crisis. Recently, crew members of the cargo ship MV Moonray were left shocked when an accident on board resulted in the death of a colleague. 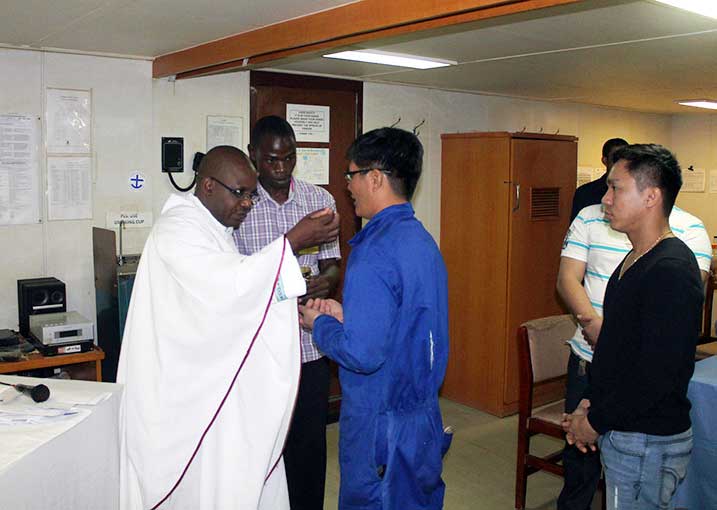 The dead seafarer was a 26-year-old Filipino man, a member of a close-knit crew—or a “family” at sea.

“The bereavement had a huge effect on the emotional and psychological wellbeing of the other crew members,” said Terry Whitfield, national director of AoS in Durban.

They received immediate support from AoS in Mombasa, Kenya, where the ship had docked.
AoS Mombasa port chaplain Fr George Sunguh went on board the ship to support the crew and organised Mass to be said on board.

Despite still being in a state of shock, the crew members had to carry on working and the MV Moonray continued its voyage regardless.

“Unlike shore-based workplaces, seafarers don’t normally get time-off for bereavement or the necessary support. This is where AoS port chaplains are able to fill such gaps,” Mr Whitfield said.
When the ship arrived in Durban port, AoS port chaplain Fr Herman Giraldo attempted to board the ship after having tracked the vessel.

“Unfortunately, this was not possible as the ship arrived at 2am and set sail again three hours later, spending only a few hours at the port with the crew working all out to get the ship turned around quickly,” said Mr Whitfield.

“This case illustrates the difficulties posed by short turnaround times when trying to provide support to crew,” Mr Whitfield said.

When the ship docked at Santos port in Brazil, AoS port chaplain Fr Samuel Fonseca and his team visited the crew on board. They were reassured by the ministry’s continued prayers and support for them.

Mr Whitfield said that 90% of world trade is transported by ship, “but the life of a modern seafarer can be dangerous and lonely. They may spend up to a year at a time away from home, separated from their family and loved ones, often working in harsh conditions.”

AoS chaplains and ship visitors “welcome seafarers to our shores, regardless of their creed, and provide them with pastoral and practical assistance. They recognise them as brothers and sisters with an intrinsic human dignity which can be overlooked in the modern globalised maritime industry”, Mr Whitfield said.