The last three months of the Year of Mercy include jubilee celebrations for the imprisoned and for homeless people. 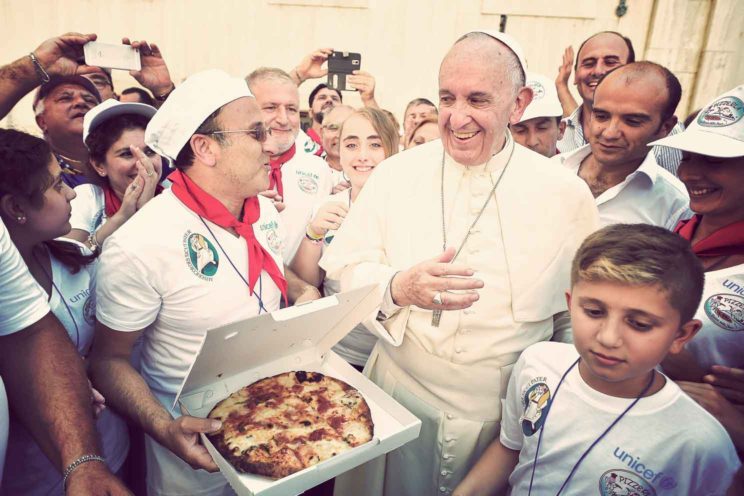 Pope Francis greets pizza makers from Naples during a pizza lunch for the poor after the canonisation of St. Teresa of Kolkata at the Vatican. Three thousand pizzas were served by Missionaries of Charity nuns and brothers to about 1,500 poor people who had come to the canonisation Mass from shelters, dormitories and soup kitchens the order runs throughout Italy. (CNS photo/L’Osservatore Romano)

Releasing a schedule of liturgical celebrations over which Pope Francis will preside, the Vatican included Holy Year Masses for prisoners on November 6 and for the homeless on November 13.

The schedule also mentions his planned trips to Georgia and Azerbaijan from September 30 to October 2, and to Sweden from October 31 to November 1 to commemorate the 500th anniversary of the Protestant Reformation.

The pope also will preside over Mass with canonisations in St Peter’s Square on October 16, World Mission Sunday. The pope will declare six men and one woman saints, including the Argentine “gaucho priest”, Bl José Gabriel del Rosario Brochero, and Bl José Sanchez del Rio, a 14-year-old Mexican boy martyred for refusing to renounce his faith during the Cristero War of the 1920s.

Also on the calendar:

October 8: Jubilee Prayer Vigil in St Peter’s Square with delegations from Marian shrines around the world.

November 4: Memorial Mass in St Peter’s basilica for bishops and cardinals who have died in the past year.

November 20: Mass in St Peter’s basilica for the closing of the Holy Year of Mercy.—CNS