How Jansen turned around a university 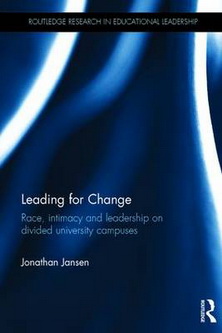 Professor Jonathan Jansen, who recently resigned as rector of the University of the Free State (UFS), wrote this reflection on his efforts to bring about change in the UFS over the first five years of his appointment in 2009.

Not long after he had taken up that appointment, he had to deal with the infamous initiation ritual in the university’s Reitz residence, which was to shape the whole of his next six years at the helm.  Several young white men videotaped a ritual in which they degraded the domestic workers responsible for cleaning that residence.

The purpose of the video-taped ritual was to protest about the policy of integrating the UFS residences which Jansen had initiated. The video went viral and Jansen had to contend with what he describes as “the single most horrific act of racism ever to be perpetrated on a university campus”. He claims that the four white students involved still have no idea “what the fuss was all about”.

Leading for Change gives a fascinating account of how Jansen, after this profoundly disturbing incident, used every possible strategy to bring about fundamental changes in the attitudes of UFS students and staff, both black and white, to accept diversity in a way they had never before experienced.

So, how did Jansen set about the Herculean task of changing possibly the most conservative of South African universities, with a white student body largely made up of students with a rural farm background, and black students largely from rural township schools completely isolated from interaction with white schools? Moreover, this was in a city like Bloemfontein, with none of the diversity of the port cities of Cape Town, Durban and Port Elizabeth.

Both black and white students insisted on staying in racially segregated residences — but for very different reasons. Each group had a deep fear of physical closeness with the other, afraid of how the other group would relate to them.

However Jansen was convinced that integration of the residences might provide the last possible opportunity for black and white youth “to learn togetherness in intimate community”.

One of his most important discoveries was that the Reitz residence was full of traumatised veterans of the apartheid army, who had suffered some of the most terrifying war experiences and never been properly debriefed. What was needed, he asserted, was not the closing down of the Reitz residence which had made UFS infamous; the change strategy he chose, was to “open eyes to see the historical enemy near to you”. UFS needed an intensive focus on the “institutional conditions that produced these students”.

In the small rural towns from which the Reitz students came, white people most commonly referred to black people in a whole range of deeply offensive names. Jansen realised that “as long as the poor, underprepared black student was pitted against the privileged, well-schooled white student” the chances of combating racism would be slim, so he went about raising the academic standard and recruiting top black and white students from all provinces. It worked.

Careful observation of how the UFS operated made Jansen aware that the institution, “through its architecture, paintings, rituals, ceremonies, initiations, hierarchies, messaging and organisation”, itself created the conditions for young racists like the Reitz Four to emerge. So symbolic actions were as much needed as practical steps to undo the wrongs of apartheid.

He also reached out to a much wider group of students and staff back home on the UFS campuses through numerous workshops on leadership development, facilitated by outsiders who themselves spoke from diverse life experiences such as white or black, gay and lesbian, able-bodied and disabled, who led workshops from early morning until late at night.

To what extent does he see his various strategies as having succeeded in transforming the UFS? In general he found that home, school, church and even geographical community (urban or rural) made a great difference in terms of people’s capacity to overcome prejudice, as a first step, and to embrace otherness, as a second step.

But he found that there was also something deeper within the capacity of some human beings that helps them to move beyond tolerance and that such people can have a helpful effect on many others. He was especially impressed to discover how young students were much more open to change than older students or staff, and so he placed much more emphasis on influencing the first-year students. “The capacity for openness is still there.”

Faced with unrelenting opposition in the local community, it is remarkable that Jansen was able to achieve so much in just six years. It helps the reader to understand why he has chosen to move on, from what must be one of the toughest jobs on offer in South Africa today: to be vice-chancellor of a university.

Despite all the rigours of his role as vice-chancellor, he says in the concluding paragraph of the book:  “Time after time I would find myself, over those years of leadership, surprised by joy. I bore witness to the transformation of tens of thousands of students from entry positions of anger, fear and anxiety towards something as elusive as human togetherness. Many have made that transition from physical proximity to emotional embrace, and simply to have been part of their journey as students remains an unspeakable joy.”